PHOTO PROVIDED Khristopher and Deprina Godboldo are moving to Rochester on March 1.
Khristopher Brooks and his wife, Deprina Godboldo, moved into their new apartment in New Rochelle, New York  last March, just as the city was declared one of the state’s first COVID-19 hotspots.

That same month, the Manhattan newsroom where Brooks worked five days a week was shut down. He hasn't been back to the building since.

"My job doesn't foresee us coming back to our newsroom for most of 2021," said Brooks, a business reporter and editor for CBS News.

Like millions of others, Brooks soon learned that he could do his job from home.   In fact, the Pew Research Center says 54 percent of people who can work remotely would like to continue doing so after the coronavirus pandemic.

"I really only need a laptop and a cell phone and some strong Wi-Fi  to do what I do,” said Brooks.

For the last year, a small corner of his 650-square-foot apartment has been Brooks' makeshift office, but he realized that if he's going to be working remotely, he has flexibility.

Brooks and Godboldo signed a one-year lease for an apartment on East Avenue in Rochester. They're getting an additional 120 square feet for less than they paid in New Rochelle. They're scheduled to move in March 1.

They're not newcomers to the area. Brooks used to work at the Democrat and Chronicle, and Godboldo is a graduate of Syracuse University.

That's something they have in common with other newly remote workers who moved to the area during the pandemic: Rochester connections. 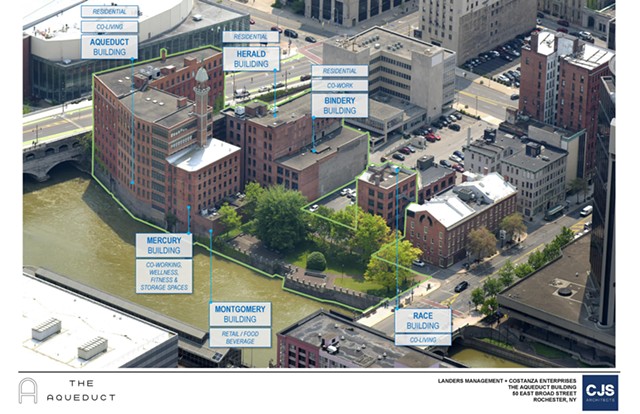 But local developers think Rochester is attractive enough to appeal to remote workers who don't have ties to the region.

"Rochester is a big, little city. It has the cultural amenities of a large city, but it's got the conveniences of a smaller city, “said Jim Costanza, president of Costanza Enterprises.

His company, in partnership with Landers Management and Rob Sands, was chosen by the New York City-based co-living company Common to develop a remote work hub in Rochester.  It's among five projects selected in a national competition to capitalize on the paradigm shift in the way people live and work in a world changed by the pandemic. The complex will occupy seven buildings along the Genesee River between Broad and Main streets, including the historic Aqueduct Building.

"The designs that we're working on with Common will be unique and novel in the sense that they will provide work-live environments within the apartments themselves as well as a remote work hub on the campus,” said Peter Landers, co-founder of Landers Management.

Plans call for 115 apartments that will be leased for between $900 and $1,800 a month.   They will range in size from 400-square-foot "micro studios" to apartments with shared suites, similar to student housing.

The first phase of the project, which will include 65 residential units, retail space, and a rooftop terrace at the Aqueduct Building and co-work space, storage and other amenities at the Mercury Building, is slated to be completed by the end of this year. The rest of the project is expected to be done by 2022.

It's the kind of space that might attract someone like Philip Detrick. He moved from New York City to Webster in September. 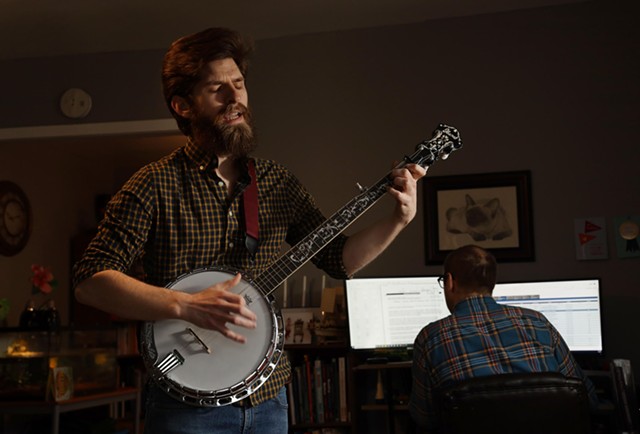 Detrick, who worked in local theater in Rochester when he lived here about four years ago, was studying acting in New York.

Last summer, he lost his job as a restaurant server. Then, all three of his roommates told him they were moving out.

"I kind of hit this point where I was like, 'Oh, I don't think I can stay here anymore.’ Things were not viable," he said. "I was not able to find work."

Now, he's staying at his brother's place in Webster and just landed a new tech support job. He hopes to get his own apartment.

"I'll tell you this," Detrick said, "Above New York City, at least here I can look out my window and see some trees, see some nature. It's not all concrete jungle."

Detrick thinks he might stay in the Rochester area for about a year.

Brooks, on the other hand, wants to save money to buy a house, and the longer he can stay in Rochester, the better.

"Ideally," he said, "I'd like for this to be a long-term thing, but if the job comes calling back, I gotta go."

Other recent Rochester transplants are hoping to make their move more permanent.

"All of whom were looking for a smaller city where they could take the income they're generating in these larger cities and work remotely here in Rochester," he added, "still deriving the same annual income, but reducing significantly their annual cost of living."

Siwiec said he's had conversations with prospective buyers who have $800,000 to $1.5 million to spend on a new home.   When he tells them the type of house they can get in Monroe County for half that price, "they're astounded," he said. 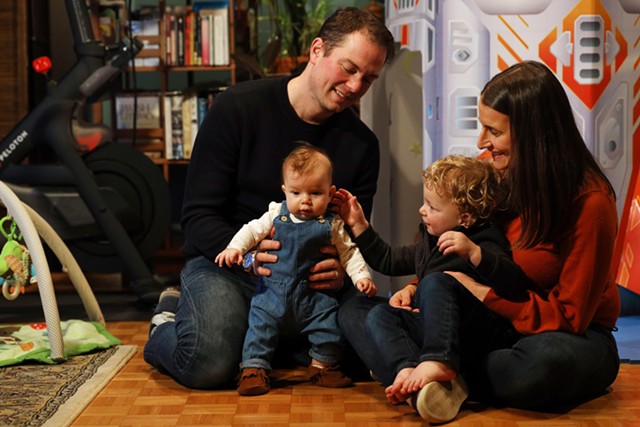 Lower prices were one of the selling points for Pittsford natives Rachel and David Berk when they moved back from Brooklyn last March, but that wasn't the main reason for their move.

Last spring, COVID-19 infection rates were soaring in New York City. Rachel was pregnant, and she was worried about getting to medical appointments and giving birth in a hospital. The Berks were also anxious about going outside with their 2-year-old son, Owen. Even playgrounds were shut down in New York.

"And here we had a backyard, and my husband and I had always thought about coming back here for the longer term, but that was a few years down the line, so this just really accelerated our timeline," she said.

After living with her parents for the last 10 months, the couple and their two children are getting ready to move into their new Pittsford home in March.

None of this would be possible if they weren't able to work from home. Rachel works for a software technology company and David owns a business recruiting and consulting firm.    She has also become an unofficial ambassador for Rochester.

"We're, like, trying to convince friends to move here," she said.

Kate Beale, another Pittsford native, didn't need to be sold on the region.

"My family and I, we are really focused on the silver lining, and for us, the silver lining has been this opportunity we've been afforded to take advantage of the virtual and remote work space that we're in, to be close to family, to prioritize our health and safety," she said.

Last March, Beale, her husband, Douglas Maguire, and their two sons moved from Washington, D.C., to Rochester.    Kate works at a global pharmaceutical trade association, and Douglas is a foreign policy expert at a Denver-based law firm.

Before the pandemic, she made monthly work trips to Asia to meet with clients. Now she takes those meetings virtually. Her organization is allowing employees to work remotely for the remainder of the academic year.

"Are there opportunities to keep the home base in Rochester and commute back and forth as appropriate?" she said. "We are hopeful that it will be a longer-term situation."

Maguire grew up in D.C., but Kate said he is impressed by what Rochester has to offer. 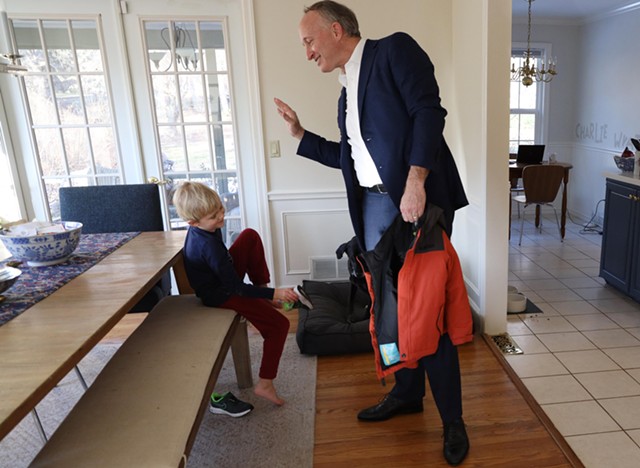 "He's really enjoying the new YMCA, spending time teaching our children how to swim, ride their bikes." she said. "He's actually very excited about this winter, learning how to ski."

The Rochester region is well-positioned to capitalize on the way the pandemic has changed how people work, according to Joseph Stefko, president and CEO of ROC 2025, an economic development alliance.

"People, especially in some of those higher-cost, dense metros are reassessing their location," said Stefko."And what maybe drove a location decision months or years ago are no longer the operative variables, so we think there's a very real opportunity for greater Rochester to be able to leverage this."

ROC 2025 is getting ready to launch the second phase of its multimedia marketing campaign.

The  goal is to amplify the region's assets, including the quality of life and lower cost of living.   "And," Stefko added, "frankly the ability to spread out that you really don't have in a lot of those larger, dense, high-cost metros."

He said it makes sense to target that message to remote workers who have flexibility in where they live.    Rachel Berk couldn't agree more.

"There is such a great case to be made for people to move here," she said. "I think this is our forever home."