Zero Level's 'Toledo Will' is a three-pronged punk rock attack 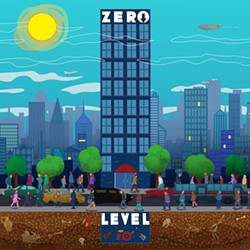 Zero Level, a band that’s relatively new to the Rochester punk rock scene, released its EP “Toledo Will” back in July. But it’s worth revisiting — a three-pronged attack that rolls out the songs with enough variety that they sound as if they were performed by three separate groups.

Drummer Dusty Payette, bassist Al Beaman, and guitarist Phil Tharp recorded “Toledo Will,” courtesy of Vanishing Zenith Records, at Watchman Studios in Lockport — where the majority of the Flour City’s heavy bands go — with co-producer Doug White at the wheel with the band. They maintain attitude over three songs: a loosely executed “Big Legged Woman,” with its lyrical nod to Led Zeppelin’s “Black Dog”; “Always Trouble Me,” with its trippy guitar; and “Must Learn To Ghost,” a sludgy serving of straight-up punk rock.


Want more? This spring, Zero Gravity anticipates the release of a full-length album, “Fantastic Disaster,” which will include the three songs from “Toledo Will.”