PerthAustralia's Harper must've been holding back a bit when he played the tent during last year's Jazz Fest. Based on his fiery and funky set I dug a couple of weeks ago at Dinosaur, Harp probably figured those in leather and denim are a whole lot sturdier than those in khakis.

Sporting some MotorCity muscle on the bandstand, Harper raged on the harmonica, even singing through it at times. He was definitely one of the loudest acts I've seen in the joint. There's nothing quite like a Lee Oskar honking through a Green Bullet. And there's nothing quite like a blues act introducing the didgeridoo --- the band had to swerve into minor keys to accommodate the instrument's limited range and ominous moan. 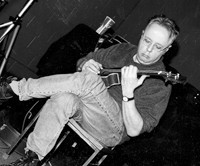 Like a lot of these restless bands borne of the jam band movement, State Radio filled Milestones on a recent Wednesday night with an enthusiastic crowd. This throng, like those at the February 4 O.A.R. show, seemed to know all the words. The trio hopped it up with reggae in the tradition of The Police (not like a lot of bands that decide the one drop's a good idea after enjoying too many smoky treats). And the ZenyattaMondatta parallel doesn't end there, as the band seems to take a decidedly progressive stance on politics.

As I said a while back in reference to our own brilliant Respect Sextet, jazz is the truth, albeit an interpretive truth. And though I have no aversion to the truth, I prefer my own version. Listening to jazz bands like Margaret Explosion --- which has a residency at the Little Theatre Café --- helps me get there. The band started playing last Wednesday even as the members slowly assembled on stage, each member gradually joining the others. There were no words other than those already in my head. It was cool and beautiful and dreamy and you have no idea what I'm talking about, do you?