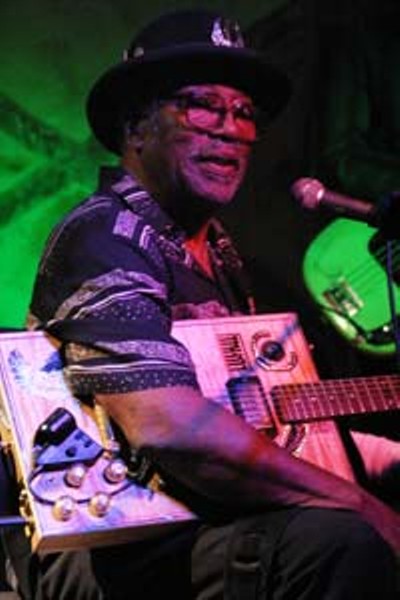 Frank De Blase Bos no square with that square guitar

I don't know what it is with all these old black blues guys and their stereo chorus and flanger effects. Cats that came off rough-and-tumble raw in the rock 'n' roll dawn now sound like Andy Summers on a Thunderbird jag.

Example numero uno: Fat Possum legend T-Model Ford --- a truly murderous and mean dude. The chorus and flanger guitar effects on his new album, Bad Man, soften the viciousness of his attack. But he'll still be something to see when he hits the Montage stage on March 4. Better watch out.

Example two is Bo Diddley. Diddley has always been an effects cat, relying heavily on tremolo in developing his trademark beat. Bo sold out two shows at The Montage Valentine's night. Injuries sustained in a plastic drapery fire coupled with old age forced the Diddley daddy to play sitting down.

His was more of wandering blues set with solid, laidback grooves admirably supplied by The Hi-Risers. They made Diddley sound great. Diddley broke out his soulful new tune "Leave." With passion akin to that of the Reverend Al Green, he pleaded for the woman to leave and take her ugly dog with her. Bo really broke it down at one point: He begged her once again to leave with the ugly dog and take the pooper-scooper too.

Diddley's second show was a lot more raucous than the first, especially when he broke into a 20-minute rap followed by an incessant primal scream on "Rock 'N' Roll Vampire." Bo howled throaty and desperate. He wanted to suck your blood.

I drove down to the rotten apple to hang with Brooklyn's Blind Pharaohs and Philadelphia's Phantom Drifters --- both bands are headed this way in March. They tore up Hogs 'N' Heffers, a joint where women dance on the bar, scream at drunk patrons through a bullhorn, and spray the crowd with beer. Brassiereshang down from the ceiling like stalactites.

On this particular Friday night the inmates were running the rockabilly asylum. During The Pharaohs' "Moonshine Superman," the barmaid lit the bar on fire. Bassist Chops Laconte climbed up to slap the bass silly while being consumed in flames and eager female hands. I think the boy had about 25 one-dollar bills in his pants by the time he was through.

Meanwhile, back in Rochester, Your Mom was warming up Richmonds Saturday night for The Earl Cram Revue. By the way all the crackers were pinned to the rear of the bar, I knew something cool was happening on stage. For there was Miss Amiee Lane strangling her Strat and stomping on her Big Muff while Miss Joey held down a beat with thundering hairpin turns.

If it weren't for the drums you would swear Lane was playing off the top of her head. This duo of mudhoneys obviously embraced some structure, but it was gloriously frayed. They're onto something for sure.

The Earl Cram Set was bigger and bolder than Richmonds'neighborhood feel could contain. Singer, shimmier, and shaker Miss Suzie Willpower bumped, ground, and teased, turning the whole joint into her stage.

So The Mister T Experience has mellowed some and grown into quite the pop quartet, but now pop-poster master John Perry thinks they suck. For me anyway, the California band's edge has softened some but the songs are really, really good. Most of them were introduced during Saturday night's Bug Jar show by frontman Dr. Frank as being "about a girl." But really, aren't they all?

Nader? I'm holding out for Larry Flynt this time.

Hey, and thanks for all the cards and flowers.