Yet another crisis for Rochester's schools

October 23, 2018
Here we go again, starting the search for a new superintendent for Rochester's schools.

I hope everybody in the district realizes how really awful the situation is. 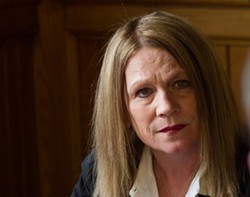 It's easy to dump on this district, and lots of people do. Some of them know what they're talking about; many of them don't. But this is no time for defensiveness or face-saving. Superintendent Barbara Deane-Williams' decision to retire – which she announced in the middle of the night – is simply one more symptom of the district's failures.

This district has some terrible challenges, including an extraordinarily high student poverty rate. But the current crisis has nothing to do with poverty. It has to do with management. And personnel. And district leaders – board members, administrators, union leaders – haven't done a good job dealing with either.

It's not that they haven't known what's wrong. Multiple studies over the years have detailed the problems. But they persist.

And now this board, whose members are frequently sharply critical of one another, has to start looking for a new superintendent. That won't be easy, because board members don't even agree about their own role. Some of them want to be closely involved in district operations. Others believe their job is to set policy, hold the superintendent accountable for following it, and otherwise stay out of the way.

Deane-Williams' resignation isn't the only bad news hitting the district this fall. A recent consultant's report attacked the district's budgeting practices. Any day now, Jaime Aquino, the state-appointed Distinguished Educator, will release his assessment of the district's operations, and board members say they've been told it'll be a harsh one.

Aquino has told board members that his report will touch on problems he has found throughout the district. I hope so. Because clearly, the problems in the district are system-wide. And leaders throughout this district have been awfully good at blaming others but not so good at admitting – and correcting – the faults in their own area.

It's way past time for individual leaders to focus on fixing the problems they're responsible for fixing – and for them to start cooperating and helping one another.

There are multiple tragedies in all this, starting with the students, who are being deprived of the education they need and to which they are guaranteed. Also being hurt are the many, many district employees who go to work every day determined to do the best job they can in the service of Rochester children and their families. Their efforts, and their reputations, are being dragged down with that of the district.

All that is at risk now. Too many people in the community have lost faith in the district, and slow increases in graduation rates won't restore it. A school district with little public support is a school district in very deep trouble.

Urban Journal Superintendent Barbara Deane-Williams' decision to retire – announced in the middle of the night – is simply one more symptom of the district's failures.