Amanda Slish loves her work as an emergency patient care coordinator at Veterinary Specialists and Emergency Services in Brighton.

"I can't really imagine doing something else with my life,” she said. “It's what I've always wanted to do, that's why I've stuck with it so long."

She's been working at the hospital for almost 17 years.

Sam Estes, who has been there for 13 years, loves his job, too. He’s an ultrasound technician.

But he does feel the stress of emergency veterinary medicine.

“If somebody wakes up at night and notices that their dog is retching and can’t breathe, they’re going to bring him to us, and it’s us who will have to triage that and jump into action as soon as they get here," he explained.

Slish, Estes and roughly 128 of their co-workers have become increasingly frustrated with their working conditions since the hospital was sold this year. That's why they started thinking about joining a union. For one thing, they say they want to earn a living wage. 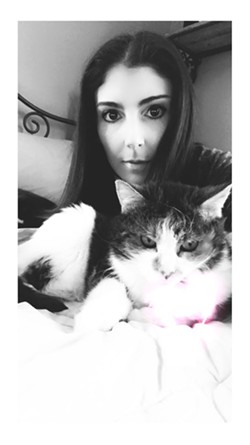 Slish would not divulge her pay rate, but according to the National Bureau of Labor Statistics, veterinary assistants earn an average hourly wage of $14.89.

Slish said she and many of her colleagues have to work a second job to make ends meet, and some have had vacations denied because of staffing shortages.

They've been working with Liz Hughston, president of the National Veterinary Professionals Union.

"I hear from veterinary workers multiple times a week who are interested in learning about organizing," Hughston said.

Since it was formed in 2017, the union has supported efforts at five veterinary hospitals on the West Coast, but only one group of workers was able to ratify a contract with their employer.

Hughston said that during the COVID-19 pandemic, there has been a wave of ownership changes in veterinary practices across the industry, and veterinary workers feel they've lost their voice.

According to the New York State Veterinary Medical Society, about 84 percent of its current members are with privately owned practices, but Hughston said a growing number of practices are being sold to large corporations.

She said she believes this is driven by an influx of venture capital and investment firms into the market.

"They are capitalizing on a very low paid workforce who is mission-driven who will accept lower pay, lower benefits, worse care for themselves in order to provide better care for their patients," Hughston said.

Earlier this year, Monroe Veterinary Associates, which has 15 practices in the Rochester area, including VSES, was acquired by Pathway Vet Alliance.

The Texas company has over 400 veterinary clinics nationwide. The company recently rebranded itself as Thrive Pet Healthcare. Its major stakeholder is TSG Consumer Partners, a private equity firm.

VSES employees who spoke to WXXI but did not want to be identified for fear of retaliation said the change in ownership of their hospital has led to cuts in employee health care benefits and part-time workers no longer receiving discounts on emergency and specialty services for their own pets, a perk they said was previously available to all employees.

Employees said work-life balance has suffered because the company is inflexible with requests for work schedule changes. Part of the problem is a lack of workers.

An ongoing labor shortage in veterinary medicine across the U.S. has predated COVID-19, but it’s become more of a problem since the start of the pandemic. Slish estimates that 60 percent of her colleagues at the hospital have quit in recent years.

She admits there were times she contemplated leaving, too. But she is optimistic that union representation could result in wage increases, giving veterinary support staff a sustainable career.

“That would hopefully then make the veterinary industry fill back up with the amount of people who were coming into it when I came into it sixteen years ago,” she said.

The VSES workers supporting a union are confident their vote will succeed.

If it does, they will be represented by the International Association of Machinists and Aerospace Workers. That doesn't sound like an obvious fit for veterinary professionals, but Hughston said it's not the name or industry that matters.

"What's important is that these organizations see workers being taken advantage of and they want to help them get their power back."

If the workers make it to the bargaining table with Thrive, IAMAW organizer Mike Evans anticipates some tough negotiations.

"If workers start unionizing in this industry, it's concerning to those that are benefiting from it, so they want to stop it all costs, I think right now," he said.

Thrive did not respond to a request for an interview, but a spokesperson said in a written statement that they respect the rights of employees who are exploring union representation.

Evans said Thrive has already hired a law firm and a consultant with union-busting reputations. But he thinks a contract is still "doable."

Estes, the ultrasound technician, is encouraged by the recent momentum in the labor movement, including a successful union vote recently by workers at a Starbucks store in Buffalo.

“Now's the time," he said. "There’s definitely a lot of union activity.”

The National Labor Relations Board is scheduled to count the VSES employees' mail-in ballots on January 14.

If the veterinary workers agree to unionize, Hughston said they will be making history.