Word to your father 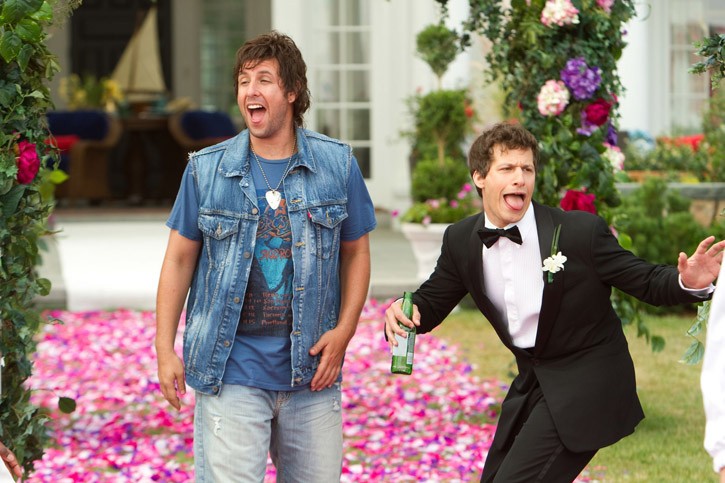 In "AWESOM-O," one of my favorite episodes of "South Park," a disguised Cartman gets Butters to think he's a robot, and, following a gauntlet of typically weird events, the robot ends up pitching movie ideas to an eager bunch of studio suits. About 800 of these pitches star Adam Sandler, including one where he'll inherit a billion dollars if he can become a boxer, as well as one where he's trapped on a desert island and falls in love with a coconut. Now, I totally believe Cartman's spontaneous riffing illustrates how more than a few Sandler flicks have gotten made, and I'm also pretty sure that anyone who isn't actively profiting from the man has little to no respect for the majority of his artistic choices.

Then again, so what? Adam Sandler isn't making movies for his peers, or the critics. His movies are for the ticket buyers of this world, or, more accurately, their lowest common denominator. And Sandler reaches a new low with "That's My Boy," an obvious, idiotic, inappropriate, misogynistic, and often very funny comedy that continues to preach the simple Sandler gospel: try not to be too much of a dick. Unfortunately, the premise of "That's My Boy" is more than a little problematic. It's 1984, and 13-year-old Donny Berger (Justin Weaver) scores — and scores — with his hot, willing teacher (a go-for-broke Eva Amurri Martino), leading to 30 years in the slammer for her, a standing ovation for him, and one baby named Han Solo Berger.

Jump forward to present-day Boston; his infamy not yet completely faded, Sandler's Donny is a mulleted loser (complete with rusty Fiero sporting a Rush emblem) who must come up with $43,000 in back taxes or face prison. A sleazy TV guy (non-sleazy TV guy Dan Patrick) promises him 50 large for a jailhouse reunion with his teacher and their child, causing Donny to track down his son, a hedge-fund manager now calling himself Todd Peterson (Andy Samberg) since cutting all ties with a dad who fed him lollipops for breakfast and made him the designated driver at 8 years old. Todd is days away from marrying into a well-off family and securing a sweet promotion, so naturally that's when Donny shows up.

And like most Sandler movies, "That's My Boy" isn't about Donny straightening up and flying right; it's about everyone around him removing the poles from their asses and being a little bit more fun. So cue semen, barf, urine, old-age jokes, genital jokes, a lot more semen, and fat jokes as Sandler heads for relatively uncharted R-rated territory. He's having a grand old time with Donny's nails-on-a-chalkboard Southie accent, his inexplicable appeal to women (of all ages), and his astonishing ability to keep a beer from spilling. Donny's anachronistic ways extend to his close friendship with a scene-stealing Vanilla Ice, salvaged despite Donny's inadvertent indiscretion with Uncle Vanny's mother: "It's not like her last name was Ice!"

Would reversing the genders of Donny and his teacher make this a completely different film? Oh, yeah. But director Sean Anders (2008's "Sex Drive") and screenwriter David Caspe (ABC's underrated "Happy Endings") aren't too interested in addressing the long-term effects felt by adult victims of statutory rape anyway, and Todd's entrenched issues, like anxiety, diabetes, and the spare underwear, are all played for laughs. (To be fair, they are all a teeny bit funny.) Then, just when you think things can't get any cruder, Anders and Caspe throw a third-act curveball that takes "That's My Boy" from hilariously crass to downright uncomfortable. And I'm not even referring to the delightfully obscene cameo by Martino's Oscar-winning mother as the present-day teacher.

So, no, "That's My Boy" isn't a good film, and may even fall into the category of potentially irresponsible. But if you bother to see it — and looking at the opening weekend numbers, most did not — you will almost certainly laugh, and that's probably all Sandler & Co. were aiming for. So ignore any nagging moral qualms that may try to surface and enjoy the fleeting things, like James Caan's brawling Irish priest, much-missed SNL players like Rachel Dratch and Ana Gasteyer (but no Rob Schneider!?), 89-year-old Peggy Stewart as Tony Orlando's plucky cougar mom, a stripper who eats her breakfast hanging upside-down from a pole, and this film's singlehanded revival of the obnoxious catchphrase "Waaazzuuuup?"