'Wonder Woman 1984' is hopeful and optimistic, but spins its wheels 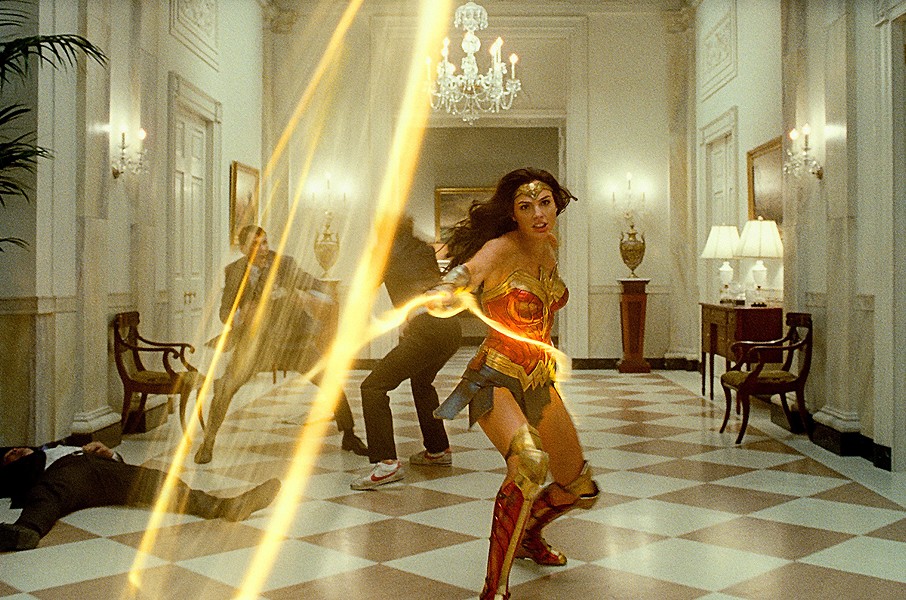 There’s a lot riding on “Wonder Woman 1984” (or “WW84,” if you go by its on-screen title). 2017’s “Wonder Woman” is by far the most successful of the DC Comics films, translating a beloved comic book character to the screen in a way that managed to please fans and newcomers alike, while earning critical raves and huge box office numbers.

In a year relatively free of big-budget Hollywood blockbusters, there’s an immense desire for Wonder Woman to deliver the goods her second time at bat. Add in Warner Bros.’ potentially industry-altering decision to release it simultaneously in theaters and on its HBO Max streaming service, and that’s a lot of expectations for one film to carry.

So it’s more than a little disappointing that the result, while not without charms, is kind of a mess.

“WW84” jumps forward in time from the original film’s WWI-era Europe setting to Washington, D.C. of the early 1980s. Diana Prince (charismatically portrayed once again by Gal Gadot) protects her superhero identity by working as a curator of ancient artifacts for the Smithsonian. She may be an all-powerful Amazonian princess saving the world on a daily basis, but Diana is feeling increasingly lonely and isolated.

Enter the catalyst for the film’s overarching plot: a mysterious ancient stone that suddenly falls into the museum’s possession, seemingly imbued with the power to grant wishes.

Eager to get his hands on this stone is wannabe oil baron Maxwell Lord (Pedro Pascal), an aspiring titan of industry who on television cultivates an image of fortune and success. In reality he’s a con man with a failing business and a young son he neglects. And he believes the mystical rock will bring him the power he so desperately desires.

Meanwhile, when she learns of the stone’s strange cosmic abilities, Diana wishes for the return of her lost love Steve Trevor (Chris Pine), who died at the end of the first film. And just like that, he suddenly reappears alive and well, though it appears he’s inadvertently taken over some other poor sap’s body.

Gadot and Pine still have an easy chemistry, and as in the first film, their scenes together are some of the film’s best. Though it is a little disappointing that so much of Diana’s identity this time around revolves entirely around her romantic relationship.

There’s also a side plot about Barbara Minerva (Kristen Wiig), a timid co-worker of Diana’s who makes a wish to be as special as her colleague. She’s thinking simply of attaining some of her confidence and glamour, but Barbara gets significantly more than she bargained for.

Returning director Patty Jenkins has fun building a candy-colored world, entrenched in 1980s excess. With an old-fashioned earnestness and an affable willingness to be goofy, it’s clear that Richard Donner’s “Superman” movies serve as an influence for the filmmaker. The film’s most appealing characteristics are its hopefulness and unvarnished sense of optimism.

But while things start off strong, the film loses its way over the course of its unwieldy two-and-a-half hour runtime. “WW84” is lighter on action than you might expect, which isn’t necessarily a complaint. The value Diana places on empathy and kindness extends to how infrequently she resorts to punching bad guys and blowing stuff up. Which, let’s be clear, she still does. Just…not as much.

You’d think that the time that would be spent developing character, yet somehow that’s not the case. Mostly the script (credited to Jenkins, Geoff Johns, and Dave Callaham) spins its wheels, particularly in its draggy middle section.

As villains, Max and Barbara have basically the exact same arc (attaining a bit of power only makes them crave even more), making their characters feel redundant, though both Wiig and Pascal have fun going big and arch with their roles.

The film establishes Lord’s hunger for world domination, but the details of his nefarious plot veer swiftly from merely “vaguely defined” to “utterly incomprehensible” with dismaying speed. And it feels like Barbara’s shift from new friend of Diana’s to deadly adversary happens almost instantaneously. Her thread isn’t helped by some uneven CGI effects that make her final form appear rather chintzy and weightless.

There’s some irony in a superhero story that’s built around the theme of learning when enough is enough failing to take that lesson to heart. But listen, in the end I can’t rag too much on any movie that features a Chris Pine ‘80s makeover montage.

If you’re looking for some entertainment to eat up some time over the holiday weekend, “WW84” will almost certainly fit the bill. But it’s a shame that I can’t imagine Wonder Woman’s second solo adventure making the same impact as her thrillingly realized first outing.

Adam Lubitow is a freelance film critic for CITY. Feedback on this review can be directed to CITY’s life editor, Rebecca Rafferty, at becca@rocheter-citynews.com.