PHOTO COURTESY MEMORIAL ART GALLERY Elizabeth Catlett's 1975 linocut, "Harriet," is part of "The Power of the Female Gaze," an exhibit of work by women artists on view at Memorial Art Gallery.

"The Power of the Female Gaze"

Rose Liu, an RIT student and photographer and video artist, in early May issued a challenge to local art institutions when she posted fliers on the front doors of museums and galleries that asked, "Do you feature as many female artists as you do male?" She also posted pictures of the fliers on social media and tagged the institutions. One of those art houses was the Memorial Art Gallery, which was in the middle of installing a women-centric exhibit in its Lockhart Gallery. MAG took the opportunity to engage with Liu and invited her to preview the exhibit, "The Power of the Female Gaze," and discuss other upcoming exhibitions featuring women artists.

Jessica Marten, MAG's Curator in Charge and Curator of American Art, says that Liu's activist action "was just one of those serendipitous things as far as we were concerned, because it was a subject we were wanting to talk about."

Liu says her fliers were part of her final project for an art exhibition critique class; she was required to make a site-specific "soft disruption" installation, and was inspired by the calls to action in Nathanial Russell's Fake Flyer project and the work of The Guerrilla Girls.

"I made this flier in order to call attention to the disproportionate gender representation that persists in the art world," Liu says. "When someone steps into an art museum, it is still more likely to see a female figure portrayed in an artwork than to see one created by a female artist."

The gender of an artist shouldn't be the determining factor to evaluate whether an artwork is good or not, Liu says, "but I wanted to position this problematic reality at the forefront of the minds of art personnel when planning exhibitions."

Liu's posters also said, "please keep this question in mind when planning exhibitions," and featured one of her own photographs of a female artist friend. Marten likes that Liu posted her fliers in a way that invited dialogue.

In turn, Liu was invited to preview "The Power of the Female Gaze," and she and Marten also discussed the Josephine Tota exhibition that is slated for 2018 along with other upcoming major exhibitions featuring the work of women artists.

"The Power of the Female Gaze" had been scheduled for 2017 a couple of years ago as part of a city-wide celebration of the centennial of women getting the right to vote in New York State.

Marten worked with MAG's Creative Workshop faculty member, Ortensia de Loren, to select work for the show from the permanent collection that was created by 22 women artists and features female subjects, and many include important social messages in a wide range of media.

We may only be able to recite a few famous female names from art history, but this show serves to bring more of their names and work into the light. In addition to contemporary pieces, it includes centuries-old work, such as the gilded, stunning 1781 print, "Truth Attacking Envy," by German artist Maria Katharina Prestel, who was a rare female printmaker in her era.

Work by household names, such as Mary Cassatt and Georgia O'Keeffe, share walls with lesser-known women artists, and women of color are included both as artists and heroic subjects of many works.

Slideshow "The Power of the Female Gaze" 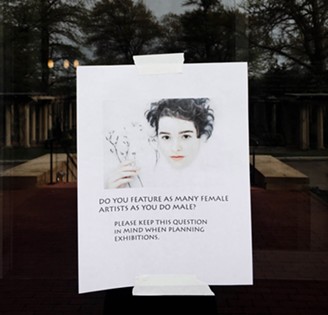 "The Power of the Female Gaze"
Click to View 5 slides

To underscore the mission of visibility, most of the curatorial labels include a portrait of the artist, and Marten was careful to tell each woman's story in terms of their own achievements as much as possible, even if their husbands or fathers were more famous. "I wanted to make sure that I wasn't talking about them through their relationship to men," she says.

"A huge part of museum work is to educate," Liu says. "It is important for curators to always acknowledge the disproportionate gender representation that persists in the art world, the difficulty in balancing the ratio of male to female artists, and that including women should not be for the sake of representation."

MAG's permanent collection includes works by 464 female artists and 2,358 male artists, and there are also a number of works where the gender of the creator is unknown.

"It feels weird to me that it's a hot topic to have shows about women," Marten says. "Why are we still having this conversation?"