With a generation gap between Black activists, can they find common ground?

Those deaths motivated action on just about every level of Rochester, from a newly minted government commission on structural racism to mass protests in the streets. Kevin Myles has seen this before. He’s the southeast regional director of the national NAACP and works with 600 branches between Mississippi and the Atlantic Coast. Myles said different generations often use different tactics when civil rights-related protests erupt.

With a generation gap between Black activists, can they find common ground?
CREDIT JAMES BROWN, WXXI NEWS
Update Required To play the media you will need to either update your browser to a recent version or update your Flash plugin.

He said the path forward is always bumpy, but a mixed generational approach is the only way to achieve sustainable change.

“That dynamic is where we can be at our most effective,” said Myles. “You know, marrying that experience with that energy and that creativity.”
In Rochester, the protests are mostly led by a new group of 20- and 30-somethings called Free the People Roc.

They describe themselves as a black liberation group. Hundreds, and sometimes thousands, of people marched with them.

Prude was revived but died a week later. Marches and protests and investigations into the incident and the alleged cover-up that followed continue to this day.

“Marches and protests are really the onramp to activism,” said Myles. “When you look around in all of these areas where you have these very large and diverse protests taking place, inside of those groups are huge numbers of people who are open to the idea of becoming activists.

“A large number of those people who go to that march, who go to that protest, go home and think, 'What can I do now?' ” he continued. “What ends up happening is a lot of people who ended coming to the march the first time see how they can plug in, and that effort can be a part of that long-term change. And that’s how those branches start to grow, or dormant branches come back because everybody gravitates not so much to the fact that they want to join an organization, but they gravitate to the idea that working together will allow us to do X.”

Myles compared the Prude case with Ahmaud Arbury. Arbury was shot while jogging in Brunswick, Georgia. The response in Georgia was similar to Rochester's but was led by the local NAACP.

The organization isn’t top of mind, though, for protest organizers Ashley Gantt and Stanley Martin. They laughed when WXXI News mentioned the organization.

Gantt said she’s heard rumors about a new chapter forming here, but added they haven’t been very active during the protests.

“Every generation pushes the envelope a little bit further,” said Gantt. “So no shade to the NAACP. I’m just worried about Free the People Roc now.”

Free the People Roc has run into pushback from mostly older members of Rochester’s black community, who asked them to stop their daily protests and negotiate. Gantt said they’re willing to listen but don’t plan to stop protesting until their demands are met.

More than a month after their protests began, only one demand has been met so far: Police Chief La’Ron Singletary was fired in September by Mayor Lovely Warren.

The group also wants the mayor and Monroe County District Attorney Sandra Doorley to resign and the arrests of all the officers involved in the Prude case.

When asked about the relationship her group has with older generations, Gantt said it's important to find common ground. But she also said her ultimate goal supersedes that.

Rich Johnson is generally supportive of Free the People Roc but sees the role of the NAACP and black activist groups differently.

“If something is really out of hand,” said Johnson, “then yes, there’s gonna be protests and stuff like that. But in my mind, I always want to get to the table and hash things out civilly.”

When Johnson’s wife, Sherita Traywick, started her political career last year, he said she was looking for help. They turned to the NAACP and realized it didn’t exist in Rochester anymore.

Johnson, who is in his 40s, joined a handful of Rochesterians who’ve been working to revive the local chapter.

Johnson said the group consists mostly of people over 40, including lifetime members who joined in the 1980s. In August, they got their 100th member, which is enough to revive the chapter. They expect that to officially happen by January.

He said he was a part of the NAACP's Afro-Academic, Cultural, Technological and Scientific Olympics, also known as ACT-SO, as a teenager. That subgroup is the NAACP’s high school recruiting arm. Despite his involvement, Johnson said he did not know it was related to the NAACP until much later.

Johnson said he’s running into the same issues today. He said the chapter’s dormant status exacerbates that. He wants to focus on letting younger generations know the chapter is not just for older people.

“In 2020,” said Johnson, "it's definitely an area where you have to explain to some young people what the NAACP does. And Rochester has grown a bunch of smaller organizations and the Urban League has built itself up. So a lot of people have been asking me why the NAACP is needed.” 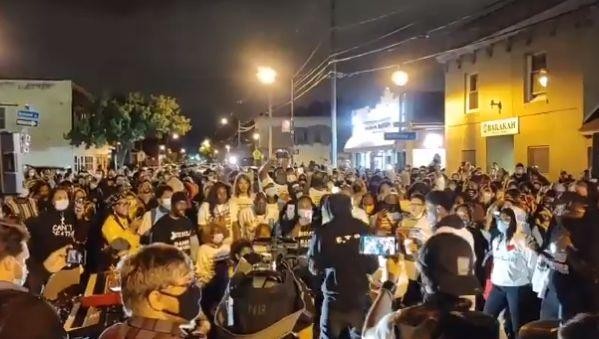 Johnson sees the NAACP’s role in Rochester as connective tissue between various African American-oriented organizations. He hopes the chapter amplifies their work.

“I feel like we can be a good partner,” said Johnson.

Johnson said local lawmakers and clergy make up a large chunk of their membership. He said those connections could make a difference to changing the status quo and political power matters as much as protests.

“My main goal," he said, "is to move this thing forward and make sure it has an agenda that’s going to help our community, where things like this Daniel Prude situation or any other situation, gets exposed, gets dealt with, and we put things in place so that it doesn’t happen again.”


James Brown is a reporter for WXXI News, a media partner of CITY. He can be reached at jbrown@wxxi.org.