Most years, by this point in the story, John Nugent, co-producer and artistic director of the CGI Rochester International Jazz Festival, generally exudes an attitude that the event is on automatic pilot.  All acts are booked, the food trucks are gassed up, the weather vanes are blowing in the right direction.

But the novel coronavirus is the wild card now, as the 19th annual event unveiled its lineup Tuesday. Highlights include the addition of Trombone Shorty at Kodak Hall at Eastman Theatre, and free shows with Taj Mahal, Kool and the Gang, the Allman Betts Band, and guitar wizard Tommy Emmanuel. In a statement issued alongside the lineup announcement, organizers said the jazz festival is going on as scheduled, but they will update the situation in May. 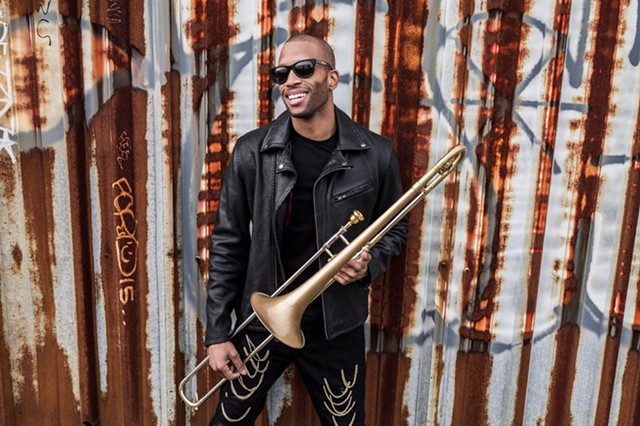 The nine-day event, which is set to run from June 19-27, drew more than 208,000 people last year. According to Nugent and co-producer Marc Iacona, no acts have canceled, even though some are coming from Europe, and others are on tours that have already lost dates to the novel coronavirus pandemic.

In comments accompanying the lineup, the jazz fest organizers wrote: “We can speculate and formulate multiple scenarios but at this time dealing in hypotheticals is not productive.”

The lineup now includes a performance from Trombone Shorty & Orleans Avenue, one of the most-popular acts to play the jazz fest over the years, as a sixth show to the Kodak Hall at Eastman Theatre lineup. Shorty plays June 25, and tickets goes on sale at 10 a.m. on Friday, March 20. The five previously announced shows at Eastman Theatre are already on sale, with opening night on June 19 featuring Puss n Boots, the alt-country band featuring Norah Jones, Sasha Dobson and Catherine Popper. It’s followed on June 20 by Wynonna & the Big Noise performing a Country Tribute Celebration, with musicians performing the songs of Tim McGraw, Eric Church and Jason Aldean. There’s also Spyro Gyra on June 23, Nile Rodgers and Chic on June 26, and a celebration of the 50th anniversary of Garth Fagan Dance in Rochester, with jazz pianist Monty Alexander, on June 24.

The first weekend of free shows, on the East Avenue & Chestnut Street Outdoor Stage, features Emmanuel as well as New Orleans pianist Jon Cleary & the Absolute Monster Gentlemen on June 19. The Allman Betts Band, with Allman Brothers Band progeny Devon Allman and Duane Betts, plays the following night. For the closing weekend, Midtown Stage at Parcel 5 has Taj Mahal on June 26 and Kool and the Gang on June 27.

The bulk of the estimated 100 free shows are on the closed-off Gibbs Street, otherwise known as Jazz Street during the festival. The early shows feature the 21 bands from area schools. Later on, the nights include established acts such as the country blues of The Reverend Peyton’s Big Damn Band on June 19, the fest favorite Soul Stew on June 25, and guitar bluesman Christone Kingfish Ingram on June 27.

A new Club Pass venue this year is Bethel Christian Fellowship, which will play host to the Made in the UK series, opening with vocalist Tessa Souter. That series has previously been held in Christ Church, which is undergoing renovation.

Two other venues join the lineup after being off-line last year. The Auditorium at East Broad and Chestnut streets, formerly known as Xerox Auditorium, offers a compelling mix, including reedman Lew Tabackin, the offbeat Austrian outfit Interzone and Stephane Wrembel’s “Django Experiment.” And the newly renovated Little Theatre will be home to nine Americana shows, including superb vocalists such as Dayna Kurtz and Ana Egge, as well as Rochester’s Connie Deming, joined by guitarist Kinloch Nelson, performing the music of Joni Mitchell.

There are other shows to watch for, too:
On Parcel 5, the Squeezer’s Stage @ M&T Pavilion has early free shows with locals such as the groove band The Mojo Collective and jazz with The Rich Thompson Quartet, followed by Club Pass shows with Dwayne Dopsie & the Zydeco Hellraisers.

At the Big Tent, early free shows are followed by Club Pass shows, some of which are at the Squeezer’s Stage as well. Lots of funk fusion and international collaborations will live there.

The after-hours jam sessions with Bob Sneider and Karl Stabnau will be back at the Hyatt Regency Rochester, starting at 10:30 p.m. each night. Free jazz workshops for youth and adult musicians will be at the Eastman School of Music, and a kids-inclusive concert is being organized in coordination with The Strong Museum.

Ticket sales for the six Kodak Hall at Eastman Theatre shows, as well as the sale of three- and nine-day Club Passes (allowing access to 13 venues throughout the festival) have been suspended until May 10.  The festival's producers say an update will be announced on or before that date. For more information, visit rochesterjazz.com or call (585) 454-2060.