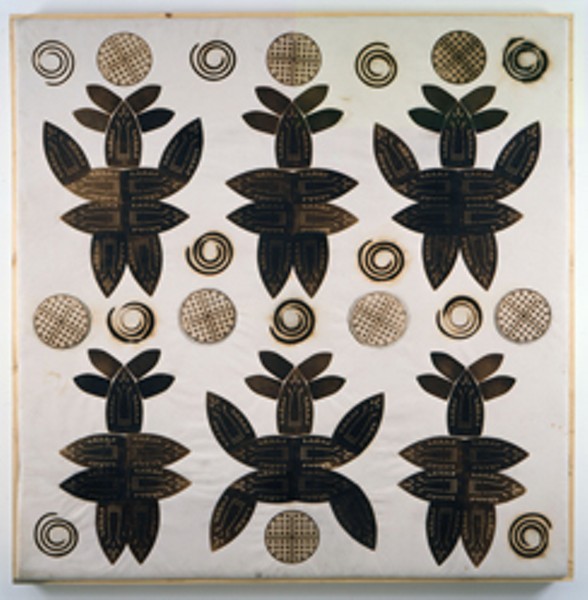 In between college graduations and festival openings, make time to see the work of Willie Cole at the JohnsonMuseum on the Cornell University campus. The exhibition is a thoughtful presentation of works of art by an African-American artist who turns ordinary domestic objects into powerful evocations of West African art, history, and mythology.

The iron, whether an actual household flatiron or its cultural conceptualization, is an important and oft-repeating theme in Cole's work. It speaks to both the role of Africa in the triangular trade that took place between England, France, and Colonial America, as well as to life under colonialism. For one thing, the trade of slaves --- Africa's "human merchandise" --- required not only the use of iron fetters, chains, and padlocks, but also branding irons. For another, under colonialism, local African workers were required to do a number of different types of labor, such as digging up ores and performing odd jobs, like bicycle repairing.

The iron is also emblematic of domesticity, of the house servant role of many women of color. While visiting the museum recently, Cole recounted a story in which he spoke of growing up in a family where his grandmother was employed as a housekeeper, and how as a young boy, he tried to keep all the irons in good order after his father left. Yet, the iron takes on particularly male associations in West Africa where Ogun, god of iron and war in the Yoruba culture, is the patron deity of all those who use iron --- whether blacksmiths or warriors.

Thus, it is not surprising that the focus of the exhibition is on works comprised of flatiron scorch-marks. "Infestation" (2000) and "Domestic Dancers" (1998) are two works in which a hot flatiron has burned a perfect imprint of its bottom onto the surface --- in the case of the former, it's over the surface of four plywood panels, while the latter is a stretched canvas. If the iron is pointing down, the resulting scorch looks like shield; if pointing up, it looks like a face or a mask. Overall, the look is reminiscent of Adinkra cloth from Ghana, which is decorated with colorful patterns created by cutting patterns into gourds then stamping them onto fabric with black ink made from iron oxides.

It is this coming together of old and new, of labor and ritual, of Western and non-Western that provides for --- indeed, encourages --- a multivalent reading of Cole's work. For example, "Pacific TjiWara" (2002) is a zoomorphic metal sculpture made out of bicycle parts. While formally minimal, one immediately recognizes the animal Cole had in mind. It is an antelope --- an animal that has special significance in the Bambara culture of West Africa.

According to Susan Moldenhauer, director and chief curator of the University of Wyoming Art Museum and organizer of the exhibition, the antelope is "a mystical animal in agricultural festivals...and is important to increasing the fertility of the fields for a bountiful harvest." It is tjiwara, or "the beast that works," which is also a metaphor for the earth. And it is here where Cole deftly links the legacies of the pre-Colonial agrarian society and colonial "odd job" of his ancestors' West African past with his own contemporary existence as one who lives in an industrial area where the recycling of the used and abused is literally, thanks to Duchamp's ready-mades, an art form.

The centerpiece of the exhibition is a major installation, "To Get to the Other Side" (2001), which consists of 32 cast-concrete black lawn jockeys on a 16'x16' galvanized steel chessboard. While these figures have become highly charged in these hyper politically correct times, Cole uses them as symbols of Elegba, a messenger deity in Yoruba mythology. Elegba guides the fate of man and he represents the center of a crossroads where one must make a decision, complete with all the potential anxiety one faces when trying to make the "right" choice.

Some of the jockeys wear skirts made out of men's silk ties, thick copper neck rings and anklets, and either have feathers in their caps or decorative beading. These, presumably, are the "leaders." Several others have their torsos embedded in cement bristling with nails, slivers of mirrors for eyes, and are brandishing knives. As such, they are reminiscent of Kongo power figures, which could heal and give life as well as take it away. By inserting a nail or a blade, the owner of the figure could appeal to the spirit to do its work. Still others wear girdles of glass bottles (to catch the evil spirits) while another group of figures wear grass skirts and are covered with small black and white bundles.

So, make the right choice. It's both fascinating and frightening to imagine all the power plays, whether real or imagined, ancient or current, that are at stake at the crossroads of the global chessboard.