Will the real Jenny Girl please stand up?

Anyone who has spent enough time in and around Rochester knows Jenny — the fresh-faced, beauty-marked woman of the vintage Genesee beer ads.

Alternately wearing a black-and white barmaid dress or a white number with red trim, Jenny has pushed Genesee beer while water-skiing, driving a convertible, lacing up a pair of ice skates, and presenting a freshly-poured pint on a platter under the timeless tagline, "Ask for 'Jenny.'"

Forever wholesome, always versatile, and never judgemental, Jenny is as synonymous with Rochester as the Flower City logo and the Garbage Plate. Indeed, most Rochesterians know Jenny. Or do they? 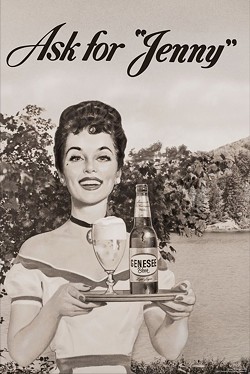 In the 70 years since her debut, challenges to the identity of the woman who portrayed Jenny rise from time to time. The latest surfaced in October, when a Texas man named Gary Johnson tweeted at Genesee claiming his late mother, Irene McKinley, was the "original Jenny girl." He posted a photo of a Genesee beer keychain bearing a close-up image of Jenny, saying, "This is her."

"I'm convinced my mother was the first Jenny girl," his sister, Kristy Johnson, said in a phone interview from her Texas home. "That was always her claim, and she'd be ticked not to be credited for it."

Genesee Brewery records suggest the Jenny of the ubiquitous ads was a Greek-born model named Daphne Dore. But that has not stopped claims to the Jenny throne from trickling in over the decades. Complicating matters is that countless women personified "Jenny" at promotional events over many years, leading to more assertions that "Jenny" was someone other than Dore.

"People come in every so often, it's not an everyday thing, but a few times a year someone might mention they knew somebody, or a relative played the role over the years," Genesee retail manager and archivist Paul Constantine said. "It's true, a lot of people played the role for us, but all indications point to Daphne as the original."

The years after World War II were for many Americans a hopeful and prosperous time. It was a good time, too, for the Genesee Brewery, then under the leadership of John Wehle, who would come to turn the company from a local mainstay to the seventh-largest brewery in the nation.

In 1953, Genesee launched what it still deems its "most successful advertising campaign" with "Miss Jenny," according to company records. The idea, company officials explained, was to give the brewery a face and personality that would resonate with the country's growing middle class.

"The one side of her was to be a community advocate," Janine Schoos, brand director for Genesee, said. "A lot of the articles I've read showed her going out into the community to be a good corporate citizen. It wasn't even necessarily about the beer, it was about, 'This is how the people of Genesee act.'"

A single model was tapped to be the "official" image of Jenny. Genesee records show her to be Dore, who was working out of New York City at the time. She would be the basis for the photos and illustrations that graced posters, billboards, and magazine pages.

But in time, Jenny would morph from a two-dimensional character to a real-life mascot of sorts, Constantine explained. Troops of "Jennies" led parades, visited local bars, and engaged with Genesee beer drinkers everywhere.

"Over the years, people have asked me if we have any sort of records, and unfortunately we don't, that indicate who was hired to appear as Jenny over the years," Constantine said. "I don't really have anything to say who played her when, but all of the available evidence points to Dore being the original (Jenny of the ads)." 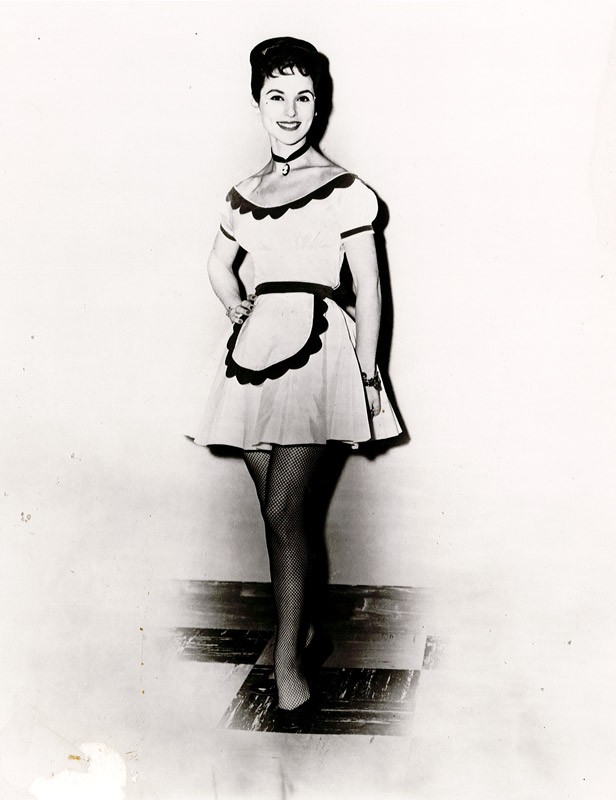 While documentation from the era is hard to come by, there is some strong evidence that Dore was the one and only Jenny of the ads. Genesee's archives contain a letter from the Rogers & Porter ad agency dated 1956 that describes Dore as the model for the Jenny marketing campaign and a "charming young lady born in Greece" who speaks five languages.

The man who created Jenny, former Genesee advertising manager James P. Duffy, told the Democrat and Chronicle in 1980 that Dore had been plugging Lincoln-Mercury cars before she was tapped to be the first Jenny in a billboard ad.

From the start, though, Jenny was never wholly one — and only one — person.

The article read that the artist hired to paint the billboard "didn't like the way her legs looked," so "a second model with more acceptable legs" served as the muse for Jenny from the waist down. "So the first Jenny girl billboard was actually two girls," Duffy reportedly said.

Eventually, Duffy noted, "several Jenny girls came and went" as Jenny graduated from billboards to television. Robert Wehle, the brewery's treasurer, even married a Jenny girl, according to the article.

Considering the available evidence, Costantine said he is "90 percent certain" the Jenny known to Rochesterians is Dore.

Irene McKinley, the woman claimed by her children in Texas to have been the original Jenny, died in 1998 at the age of 68.

Her daughter, Kristy Johnson, said McKinley was born in Berlin to a mother of Jewish lineage as the Nazis came to power. She married an American Air Force sergeant, Ernest McKinley, as the war came to a close, and emigrated to the United States in 1951, Johnson said.

"She was a woman that knew what beautiful looks could do to a man, she understood that very thoroughly and enjoyed every bit of it," Johnson said. "She didn't abuse it, but she just loved it, she loved being a woman, being a pretty woman." 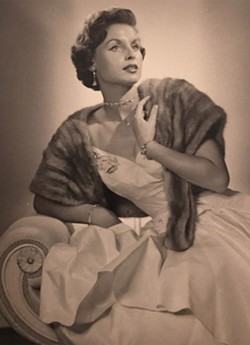 McKinley was a popular model in the Rochester area during the height of the Jenny campaign. She was profiled in a May 1954 Democrat and Chronicle article that retraced her journey from Germany — a trek replete with eluding the Gestapo, forging passports, and distributing "anti-Nazi propoganda" — and cast her as a rising model. She had been named "Miss Electrical Industries of 1953" and "Miss Easter Lily of Baker Company" of the 40th Infantry Division in Korea. A photo from another article, from 1955, showed her modeling a new Plymouth at a car show at the Culver Road Armory.

There are no contemporaneous records that suggest McKinley was the Jenny of the ads. A 1995 Democrat and Chronicle article referred to her — then named Irene Holden after remarrying — as being a "Jenny" in the 1950s. But that piece was about the many real-life Jennies played by numerous women around Rochester.

Johnson said McKinley was selected by Genesee to portray a real-world version of Jenny because she closely resembled the Jenny of the early ads, all of which were illustrations — portraits the company insists were based on Dore, or at least the top half of Dore.

There is a notable curiosity, however, in the photo of the Genesee beer keychain bearing Jenny's image that McKinley's son posted on Twitter and purported to be his mother. In it, Jenny's characteristic beauty mark, typically high on her right cheek bone in most ads, appears on the left side of her face. The image on the keychain appears to be a mirror image of another Jenny portrait used by Genesee.

Kristy Johnson said the beauty mark was drawn on with pencil. She provided early modeling photos of her mother, as well as pictures of her taken later in life, to be compared to the Jenny ads. There is a close resemblance.

"I'm convinced she was," Johnson said. "It was a story she always told, and it was something she said started her modeling career."

The march of time

Genesee ran the last official Jenny ad in 1962 ; but Jenny never officially retired. The brewery had plans in the mid-2000s to launch a modern version of Jenny, but that idea fell away with a change in management, representative said.

Thus, Jenny remains a relic of time, a sliver of Rochester history forever beckoning beer drinkers from posters and paraphernalia hung above racks of glassware and taps.

Schoos, the company's brand director, denied that Jenny was ever intended to be a sex symbol. She acknowledged, though, that Jenny simply wouldn't fit with the image Genesee is trying to project today.

Genesee's current ad campaign — "That's how it's done" — encourages Genesee fans to send the company videos or photos of them swinging a hammer, mowing the lawn, doing chores, repairing their cars, or any other assorted manual labor. The company then posts the images on its social media accounts, along with those of brewery workers going about their jobs.

"We have so many authentic people here, and we often use our own employees as ambassadors to the community that know our history, that have their own stories, that are passionate, that I'd hate to see us bring in somebody from the outside," Popp said. "We have these awesome brewers that can talk about the beers they're making."

If Jenny is to remain a remnant of the past, does it even matter who inspired the original? Dore is neither prominently mentioned on any of the brewery's merchandise nor routinely brought up as a piece of brewery history. Rather, she is a footnote.

And many Jennys came after. Together, they formed not a single person, but composites of a single character, not unlike the actors who have portrayed James Bond or Batman. While Genesee officials said they believed Dore to be deceased, CITY was unable to confirm a whereabouts or date of death for her.

"(McKinley) probably was Jenny," Constantine said. "She probably did represent the brewery at some point. It may have been for several events for all I know.

"It's just cool that people are out there and want to be associated with it, and I take them at their word."