Why does the world keep on turning? 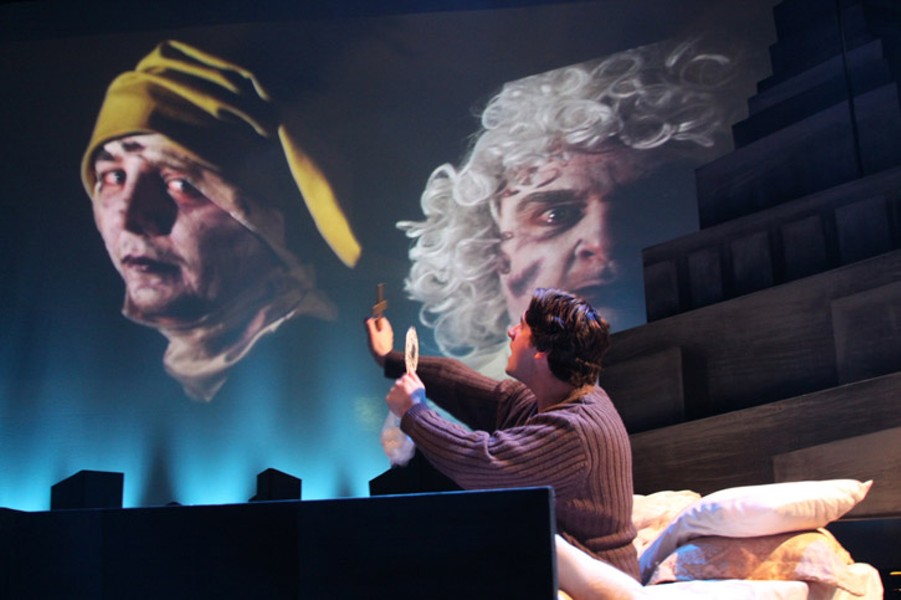 Method Machine's production of "Angels in America" — which it started earlier this year with the first part, "Millennium Approaches" — is the second staged version I've seen of Tony Kushner's epic, Pulitzer Prize-winning drama. I originally saw it nearly a decade ago, put on by a company in Virginia that had built an entirely new theater in part so that it could pull off all of the play's stunts and special effects.

For his version, Method Machine Director David Henderson made it clear from the get-go that he wasn't even going to attempt the pyrotechnics. He was going to trust in the magic of the theater to bring to life a soaring angel, a roof cracking in half, fiery tomes, a diorama come to life, and the kingdom of heaven itself. Having seen both approaches, I found that all the visual frippery ended up distracting from the heavy emotional lifting being done on stage. By focusing on the play itself, and relying on the audience's ability to be drawn into the magical realism of Kushner's story, the Method Machine production succeeds much more often than not in living up to the ambitious goals of this important piece of 20th century theater.

"Perestroika" picks up right where "Millennium Approaches" left off — and if you didn't see Part 1 back in the spring, get a recap before coming, because there's no "Previously on 'Angels in America'" clip package to ease you in, or a brief in the program to get you up to speed. (Note that Method Machine will present both parts of "Angels in America" on Sunday, September 9.) The year is 1986 and Prior Walter has recently been diagnosed with HIV/AIDS and abandoned by his partner, Louis. In his fragile physical and emotional state, Prior is visited by an angel — an actual, honest-to-you-know-what angel — who demands that he become a modern-day prophet and spread a very important message to humanity: stop progressing because people are screwing up everything.

As Prior wrestles literally and figuratively with angels, Louis finds comfort in the arms of a closeted coworker, Joe, a Republican Mormon lawyer. Joe's emerging homosexuality snaps his wife Harper's already flimsy tether, sending her into an elaborate fantasy world, and has also spurred his mother, Hannah, to sell her home in Utah to move to New York to help her son. Also involved in the story are a fictionalized version of notorious lawyer Roy Cohn and Belize, a close friend of Prior's and the nurse attending Roy as he dies from AIDS.

As previously mentioned, this stripped-down take on "Angels in America" (as stripped down as a 3.5-hour play can be, anyway) allows the audience to focus on the story, the acting, and the language. Regarding the latter, "Perestroika" isn't as beautifully crafted as "Millennium Approaches," which was polished into a gem. "Perestroika" still has some wonderful scenes and lines, but it's unquestionably more indulgent and at times feels a bit scattered. The frequent scene changes add to the start-stop quality of the play, but there are sections that are absolutely riveting. The dual scene in which Prior gets his instructions from the Angel, while simultaneously recounting the experience to Belize, is flawlessly executed, and the final scenes with Roy Cohn and his spectral visitor are genuinely moving despite the seemingly unsympathetic characters involved.

Almost the entire company from "Millennium Approaches" returns for Part II, with the exception of Erin-Kate Howard, who steps into the roles and robes of the Angel. Howard is magnificent in the role, intense, terrifying, yet beautiful, and she has mastered some very complicated dialogue, finding real emotional nuance in the promises of doom and destruction. Other standouts in the cast include Carl Del Buono as Prior, who anchors the show with his totally believable, fully realized performance; David Jason Kyle makes the ostensibly unlikable Louis oddly charming and relatable; and Marcy J. Savastano as Harper, who finds hope and strength even as every piece of her falls apart.

Ironically, the show's main weakness is when it tries to add the visual flair that director Henderson tried to avoid. Both parts of this "Angels" production attempted to deploy video projections at key points, and they never really worked. This time it was flapping angel wings and the glowing symbol meant to represent God that barely made an impression. This is a case where the director should have trusted his vision, the story, and the talented actors on stage, all of whom did a better job conveying Kushner's concept of God than any projection ever could.

Leaving the show, a friend and I discussed the continued relevance of the play – very much set in the 1980's, and inextricably linked with the AIDS epidemic – in the 21st century. While it's true that, for many, the disease is no longer the death sentence it once was, AIDS still continues to devastate millions of people worldwide. And it only takes a look at the Republican Party's current platform to confirm that Prior's line toward the end – about being "citizens" – is still as crucial today as it was 20 years ago. It's too narrow to think about "Angels in America" as a play about AIDS, or gay people, or even religion. It's so much bigger than that. The idea of "progress," about what it is and what it does and where we're going, will always be important for humanity to consider, to say nothing of trying to figure out why we do the things we do to people we supposedly love. Every time I see or read "Angels in America" I get something new from it; it's like an American version of "Don Quixote." Method Machine's production uncovered even more layers of an already complicated portrait, and it's something that should be seen and appreciated.