Why does Monroe County have so many legislators?

Monroe County voters will cast ballots this week for 29 county legislators. Yeah, that's right - 29. All the County Legislature seats are up for grabs.

Together, those seats comprise the second-largest county legislature in the state, trailing only Albany County, which has an eyebrow-raising 39 legislators.

With its roughly 745,000 residents, Monroe County has no true peer in terms of population among counties in New York. But consider that the four counties with larger populations than Monroe (outside of New York City) each has a smaller legislature.

Nassau carries 19 legislators. There are 18 in Suffolk. Westchester has 17. Erie gets by with 11.

How did we end up with so many legislators? And in an era of property tax caps and rising public pension costs, do we really need them all?

Now is a good time to ask because, after the 2020 census, the legislature that will be elected Tuesday will by law appoint a commission to evaluate the legislative districts and, possibly, recommend redrawing them.

The legislature was created in 1965, when voters approved an amendment to the county charter to abolish the governing body at the time, which was an unwieldy 43-member board of supervisors composed of representatives from 24 city wards and 19 towns.

A state judge had ruled the board unconstitutional on the grounds that it violated the "one person, one vote" principle established by the U.S. Supreme Court, which determined state legislatures needed to have representation based on districts of roughly equal populations.

There was state legislation that would have weighted the supervisors' votes. A bipartisan commission recommended replacing the board with a 19-member "county council." The independent Bureau of Municipal Research, the predecessor to the Center for Governmental Research in Rochester, called for a legislature of 23 members.

Then, the Republican and Democratic elections commissioners put forth dueling plans for a 25-member and 29-member legislature, respectively. News reports from the time suggested there was no science to the number of seats. The focus was on ensuring proportional representation.

Eventually, the Democratic plan was put to voters in 1965. The 29 legislators were first elected a year later, in November 1966, and took their seats in 1967, each representing an average of 21,556 people.

So, that's how we got 29 legislators. Now, are they all necessary?

Democratic legislators didn't always think so. In 2010, they introduced a bill to cut the legislature to 15 seats. They estimated it would save taxpayers $500,000 a year when factoring in lawmakers' salaries and benefits, and bring Monroe in line with most counties.

Republicans, who controlled the majority, denounced the proposal as "a power grab" that would "drastically reduce the level of democracy in Monroe County" - the latter being an absurd notion.

"While County Legislature Republicans fully support reducing the size and cost of local government, the majority caucus maintains that the legislature should aim to address the recurring causes of the county's structural deficit with meaningful reform - particularly through relief of unfunded state mandates," read a statement from the majority. 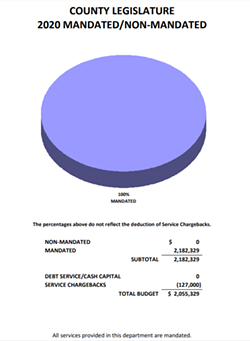 For years, county Republicans have rarely missed an opportunity to lament the county's "unfunded mandates" expenses the county bears for services that are mandated by the state. County Executive Cheryl Dinolfo did it in introducing her budget last week.

But her budget, like every other budget proposed by a Republican county executive in recent memory, considers the County Legislature and the roughly $2.2 million it needs each year to function as a mandated expense.

Granted, the expense is a miniscule fraction of the county's overall spending. The legislative budget represents just 0.2 percent of the county's $1.2 billion spending plan.

And the county has done a good job keeping legislative spending in check. Legislators' salaries - $18,000 for the rank-and-file and $54,000 for the president - haven't changed in over a decade.

But downsizing is an option, if the political will were there. It's not unprecedented.

Erie County has shrunk its legislature three times since 1981, most recently in 2010. Niagara County's legislature downsized that same year to 15 from 19 seats. Dutchess County, whose legislature was bloated at 35 seats, reduced its seat count to 25 in 2004.

Look at it another way. If the U.S. House of Representatives adhered to the ratio of residents to Monroe County legislators, there would be in the neighborhood of 13,000 members of Congress.