Why am I protesting during a pandemic? There's no choice.

June 03, 2020
During his daily coronavirus news briefing the other day, Governor Andrew Cuomo addressed the protests erupting around the country during the pandemic this way:

“You turn on the TV and you see these mass gatherings that could potentially be infecting hundreds and hundreds of people after everything that we have done. We have to take a minute and ask ourselves, ‘What are we doing here?’” 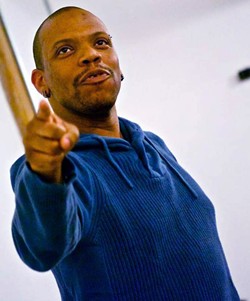 I was 14 when I took a police billy club to my throat and a boot on my spine. A Baltimore officer was so convinced that I had drugs and weapons in my book bag that he interrupted my walk to the bus stop to throw me on the ground and have his partner empty my bag onto the street. He seemed to get angry that the contents were nothing but books. He appeared to grow more furious each time he randomly stopped me for the same reason over the next few months only to again find books in my bag.

None of this was just, of course, yet I heard nothing but excuses when I complained. Then, that spring, when the officers who beat Rodney King were found not guilty, I heard about a demonstration downtown, and I went without thinking. I was mad and fed up. Attending that rally initiated what would become a new practice of mine of showing up at calls to action against injustice. If there was a march or a sit-in or a voter drive, I was there. It was a no-brainer. I’ve been a follower and an organizer of such actions for 28 years now.

This past weekend, Rochester was one of hundreds of cities around the globe where rallies against police brutality were staged, all sparked by the death of George Floyd. A lot of us have hit our breaking point.

The disproportionate policing of black people in the United States has not abated during the pandemic. Cases of verbal and physical harassment against Asian Americans around the country have surged. In New York City, police handed out face masks to mostly white people flouting physical distancing guidelines in Central Park and cuffed and clubbed people of color doing the same thing in Queens. Rochester is not much better. On the same weekend Rochester police officers thought it necessary to handcuff a 10-year-old girl during a traffic stop, they turned a blind eye to people in Corn Hill and Park Avenue throwing parties as if it were Festival Season.

Between all that, there was the murder of Ahmad Aubery and the death of Breanna Taylor. George Floyd’s killing was the breaking point.

The pandemic presented a wrinkle in the plan for action in Rochester. The virus has hit New York hardest of any state in the nation. We’ve been sheltering in place since the middle of March. Physical distancing outside the house is the norm now, and every time restrictions are eased, the COVID-19 numbers spike. The “flattening curve” is more of a spiky porcupine.

By the time I reached the meeting point for the rally in Manhattan Square Park, I felt anxious about being there. The virus has affected people of color more severely in the United States than any other group, especially those with pre-existing conditions. I am a 42 year old black man with asthma and high blood pressure. If I get the virus, it would not be pretty. Though most people survive, in the back of my head I remembered that the first person to have died from COVID-19 in Monroe County was a black man. I also recalled how the medical industry historically ignores and downplays the concerns of African American patients. I have been the receiver of that lackluster treatment. 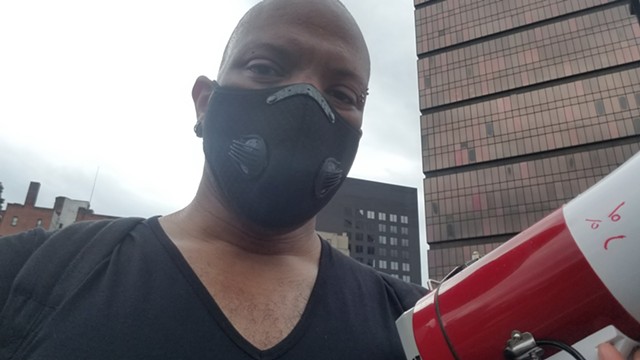 I was suddenly very much afraid. Then the organizers spoke and eased my mind. During the housekeeping part of their speeches they laid out the guidelines for marching: keep six feet from your neighbors, wear masks at all times, seek help from the volunteers on hand if you feel ill. There were a few times that I slipped up and found myself too close to someone, and I had to fight the impulse to hug a friend that I had not seen in months.

For the most part, I stayed and felt safe — until the police started shooting rubber bullets and mace into the crowd. At that point, I spent the rest of the evening taxiing people out of the protest areas, which became a lot more perilous as the crowd dispersed.

At no point did I ask myself the governor’s question, “What are we doing here?” We were doing what needed to be done, despite the risks.

Both the coronavirus and injustice at the hands of police kill African Americans disproportionately. They are intertwined. The medical industry has been mistreating and lying to black folks for years, be it the pseudo science of drapetomania, the torture tactics of J. Marion Sims, or the outright stealing of cells from Henrietta Lacks. And in 2020, I am still three times more likely to be killed by a police officer than a white person.

Racism, it seems, is stronger than ever.

Chris Thompson is a freelance writer for CITY.