August 29, 2019
From the start of the Whole Foods Plaza project in 2015, traffic has been a concern of neighbors, businesses in the surrounding Monroe Avenue corridor, and state officials. But the state Department of Transportation has signaled that it's satisfied with the developer's plans to offset some of the project's traffic impacts. 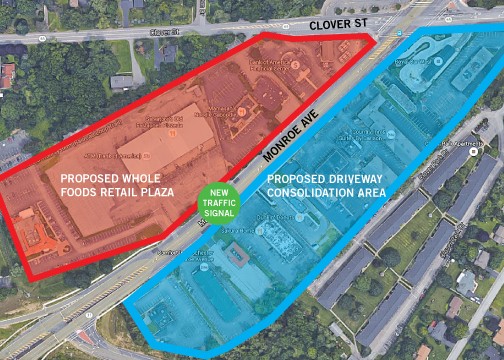 The DOT has completed its environmental review of the project, an 83,700-square-foot plaza anchored by a 50,000-square-foot Whole Foods grocery store planned for the former location of Mario's restaurant and Clover Lanes.  State law required the department  to do the review because it's a so-called "involved agency." The developers want to make changes to public roads to manage expected increases to traffic, and they need permits from the DOT to do that.

Daniele Family Companies, the developer, plans to install two traffic lights to accommodate vehicles entering or leaving the plaza. It's also agreed to limit turn directions into and out of one driveway, and to follow through on a plan to consolidate or reconfigure entrances for businesses on the side of Monroe Avenue opposite the plaza.  The signals and driveway plan are meant to make the busy section of Monroe Avenue safer and help smooth the flow of traffic through the corridor.

Brighton Supervisor Bill Moehle announced the DOT findings during a press conference this morning.  In a press release, he said that the town and DOT have conducted thorough environmental reviews and that each determined that "traffic and other impacts have been minimized. " He said it's time for the project to move forward so that the town and its residents can benefit from tax revenues and improvements to the Auburn Trail, which runs through the rear portion of the plaza site.

The town and developer are facing lawsuits from neighbors and two organizations that oppose the project because of its size.  One judge, state Supreme Court Justice John Ark, is handling those cases. Moehle said he's certain that attorneys representing the town will bring the findings to Ark's attention. He also called on project opponents to "do the right thing and stop wasting time and money on challenging this valuable project."

But Save Monroe Avenue,  one of the groups who filed a lawsuit over the project, said in a statement this afternoon that the DOT's findings "are fatally flawed and unlikely to survive a court challenge." It also says the findings contradict DOT's earlier conclusion that the project would add to traffic problems in the corridor unless it was downsized or allowed for traffic to enter through the rear of the site.