Who you gonna call?

July 13, 2016
It’s finally here. Since first being announced late in 2014, Paul Feig’s reboot of “Ghostbusters” has been the subject of scorn from a vocal contingent of (mostly male) fans of Ivan Reitman’s original films, angry that Hollywood would dare remake a beloved piece of their childhood. Never mind that Hollywood does this all the damn time. Riling up the hordes even more was news that Feig’s movie would forgo the dude vibe of the original to center around an all-female team of paranormal exterminators.

It’s ironic that Feig would be the one to earn the ire of nerds. As creator of “Freaks and Geeks,” he gave the world one of pop culture’s most honest and heartfelt depictions of geekdom. Plus, the director has had an unparalleled run of financially and critically successful comedies, including “Bridesmaids,” “The Heat,” and “Spy.” In short, the controversy is (and always was) dumb. The new “Ghostbusters” is a blast, and that’s all that matters.

Kristen Wiig plays Erin Gilbert, a mild-mannered physics professor up for tenure at Columbia University. Erin has worked to distance herself from her early days working with former best friend Abby Yates (Melissa McCarthy), with whom she co-authored a book on paranormal science. While Erin went the respectable route, Abby continued to study the supernatural alongside eccentric engineer cohort, Jillian Holtzmann (Kate McKinnon). 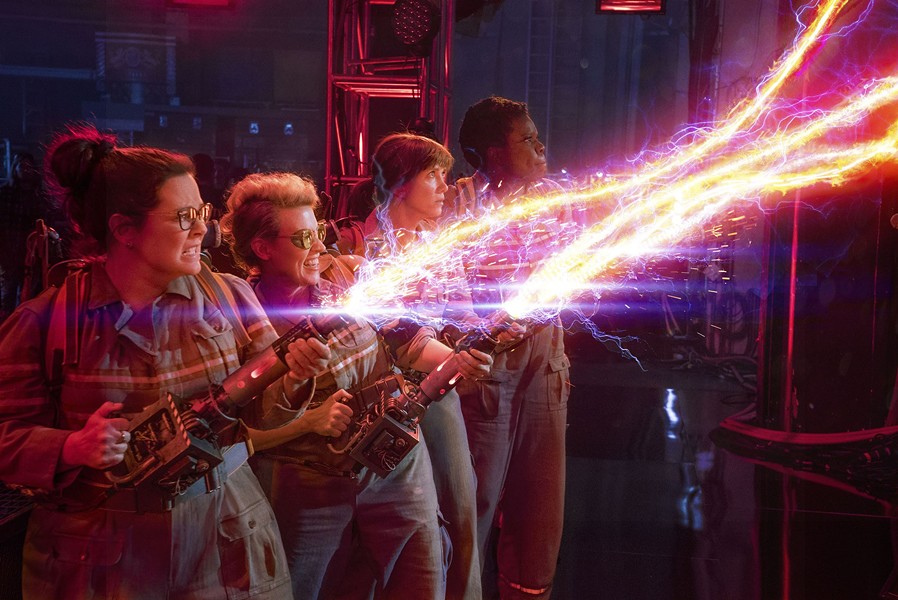 When Erin discovers that Abby has republished their book without permission, she heads off to confront her ex-friend, only to end up accompanying the pair when they’re called in to investigate a possible haunting in a historic mansion. This leads to the uncovering of a plot to unleash a supernatural apocalypse on the city, one that only they are capable of stopping. Along the way, the team’s ranks expand to include Patty Tolan (Leslie Jones), an MTA worker and amateur history buff who joins the group after a hair-raising encounter with a very angry apparition, and Kevin (a delightfully absurd Chris Hemsworth), the team’s hunky but spectacularly dim-witted receptionist.

Like most of Feig’s films, “Ghostbusters” is an examination of female friendship, and the likability and easygoing, natural chemistry of the ensemble makes it work. Thankfully, they’re not saddled with playing variations on the original film’s team; each actress gets to play her own character, tailored to their own unique talents.

Playing more subdued characters than we’re used to, Wiig and McCarthy capitalize on the easy rapport established in “Bridesmaids,” while Jones brings a prickly energy that enlivens all her scenes. Of the four, McKinnon gets the least to do, but she still practically walks off with the movie. You find your eyes drifting to her even during moments that she’s not the center of, just to watch her reactions. She adds a zany, anarchic spirit that, if anything, the movie could have used even more of. Feig and co-writer Katie Dippold are known for their R-rated comedies, and while here the humor is often very funny, it can feel constrained by the need to play it safe for the kids.

Rowan (Neil Casey), the film’s nerd-gone-wrong bad guy, is a sad-sack loner who’s been bullied so long that he relishes the chance to become a bully himself. It’s a sharp concept that allows the film to strike back at the naysayers, though in keeping with the pattern of modern summer blockbusters, by the end the script isn’t entirely sure what to do with its villain. It does, however, give audiences the loaded image of the women attacking their adversary by aiming their blasters squarely at his crotch.

Like “Star Wars: The Force Awakens” before it, “Ghostbusters” sometimes feels trapped by a sense of nostalgia. References and callbacks abound (almost the entire original cast make cameo appearances) and occasionally the film feels so busy trying to please fans that it forgets to forge its own path. The bitter irony is that a large number of the fans it’s working so hard to please have already made up their minds to never go see the movie in the first place. I liked these new characters so much I wanted to see them in adventures that weren’t quite so referential.

The film’s chaotic third act goes a bit overboard with CGI, as Times Square is besieged by an army of ghostly invaders. Feig also clearly sets the stage for a huge choreographed dance number that never happens – though it still makes an appearance over the end credits. Likely axed to keep the pace moving, it also leaves the film without a set piece as instantly iconic as anything in the original film.

Those issues aside, “Ghostbusters” left me with a smile on my face from the opening (and genuinely spooky) haunting. With an appealing cast and the kind of good-natured, goofy fun this summer movie season has been sorely lacking, the film should have no trouble pleasing audiences willing to give it the chance.

Visit rochestercitynewspaper.com on Thursday for additional film coverage, including a review of the new horror film, "Lights Out."