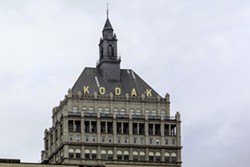 A top White House official is blasting Kodak for how the company has handled a potential government loan to make pharmaceutical ingredients.

White House Trade Advisor Peter Navarro made the comments on CNBC on Monday when asked about that $765 million federal loan that Navarro and other officials talked about last month for the Rochester company.

"Based on what I'm seeing, what happened at Kodak was probably the dumbest decisions made by executives in corporate history," White House adviser @PeterNavarro45 responds to Kodak's $765M halted government loan for suspicious trading. "You can't fix stupid. You just can't." pic.twitter.com/t3dsDlS7Em

The loan was to help Kodak gear up to make ingredients used in generic drugs. But, after news of the loan was released, there have been questions about the timing of the announcement. Kodak's stock price, and stock's trading volume increased sharply before official word of the deal. Questions were also raised about stock options issued to some Kodak executives.

"Based on what I’m seeing, what happened at Kodak was probably the dumbest decisions made by executives in corporate history," Navarro said.

Navarro’s rebuke was a lot different from the hopes he had for Kodak when he spoke in Rochester last month.

"This is going to be the second act, one of the greatest second acts in American industrial history," Navarro said on July 28 at an event held at Kodak Center to announce the potential federal loan.

But on Monday, Navarro told CNBC, "You can’t fix stupid…you can’t even anticipate that degree of stupidity."

The situation is being investigated by both the Securities and Exchange Commission and through an internal review by Kodak. In the meantime, the federal loan is on hold.


Randy Gorbman is the news director at WXXI News, a media partner of CITY. He can be reached at rgorbman@wxxi.org.