When Jessica Frey stumbled upon this game four years ago, she was captivated. Yes, its name sounded like slang for "vomiting," but it seemed so all-encompassing, so many athletic elements thrown into one rich sports stew. 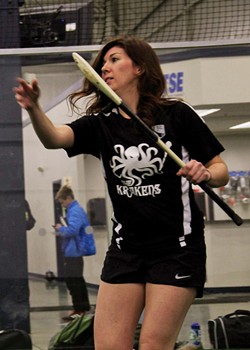 The funky swing – with dominant hand positioned below the other – reminded her of playing varsity field hockey at East Irondequoit. She was a goalie in high school, but with this game she could run. And run. Hurling's reputation as the world's fastest game on grass held true. "All my cravings for what a sport should be, that's what this was," Frey says.

Hurling, a millennium-old Gaelic field sport, has returned to Rochester.

A local group is shepherding the sport with hopes of rapid expansion. Roc City Hurling began in 2014, when two brothers needed to convince their third brother, an avid hurler, to move from Milwaukee to Rochester. The club has gone from three active members to 40 in the seasons since, drawing on the city's robust lacrosse, hockey, and soccer talent and Irish heritage to grow this singular game. "People who watch it get that initial response of like, what is going on?" Frey says.

In hurling, two teams of 15 players vie to strike a leather-wrapped cork ball, called a sliotar, toward opposing H-shaped goal posts. Arcing the sliotar over the H scores one point, while getting the ball through the goalie-guarded bottom posts nets three points.

Each player uses a stick, called a hurley, to pass the sliotar on the ground and through the air. Ending in a small oval platform, the hurley looks like a primitive golf club or perhaps an inefficient canoe paddle. Hurlers carry the sliotar by hand for up to four steps or four seconds at a time. Then if players wish to retain control, they bounce or balance the sliotar on the hurley's flat club face, like an egg-on-a-spoon race.

Goals are scored with the hurley and at close range, by foot.

Hurling and its sister sport camogie (a women's version with very similar rules) echo more familiar games – the sticks of lacrosse, the swings of baseball, the physicality of rugby and the fluidity (and occasional kicking) of soccer. They possess an amalgamation of relatable characteristics, the sporting equivalent of a Turducken.

With roots in Irish mythology (the game predates the recorded history of Ireland), hurling is tethered to its country's identity. The annual All-Ireland Hurling Championship is Ireland's equivalent of the Super Bowl. "The game of hurling became one of the great symbols of distinction between the Irish and the rest of the world," wrote Irish writer Paul Rouse.

Hurling and camogie are governed by the Gaelic Athletic Association, a semi-nationalized body that oversees hurling leagues across 32 counties in Ireland as well as international leagues in Australia, Continental Europe, and America. Roc City Hurling joined the GAA last summer, and through the GAA, taxpayers in Ireland partially fund the group. Roc City spends money back: Every hurley and sliotar is imported from across the Atlantic. Promoting hurling, the Irish government reasons, is promoting Ireland.

The Irish, and thus hurling, have been in Rochester since Rochester began. In March 1817, Rochesterville was incorporated. Three months later, construction began on the Erie Canal, which brought in Irish workers. In the mid-1800's, the Great Famine drove thousands more Irish to Western New York. By the end of the 19th century, Irish-American societies hosted hurling exhibitions for a curious public. A 1903 article in the Democrat and Chronicle predicted that hurling "will hold as popular a place in the minds of lovers of sport as football does at the present time." While subsequent decades proved this forecast absurd, organized hurling did endure.

The all-amateur Rochester Harps formed in 1950. Of the 22 players on the Harps' 1954 roster, 19 were born in Ireland and three were Rochester natives. The Harps competed against the likes of the Syracuse Shamrocks and Buffalo Gaels in the New York State Gaelic Association, hosting matches at Edgerton Park and later Genesee Valley Park. The Harps claimed multiple titles before dissolving in the 1970's.

Local hurling lay fallow for decades until Roc City came along. Unlike the 1954 Harps, the current club has only three Irish-born members. The shift toward American players highlights the game's global reach. Hurling is still distinctly Irish, but less exclusive to Ireland. Midfielder Andrew Thomas encountered hurling while traveling abroad and wanted to check it out in the States. Others heard about the club from friends or wanted to try the game that their Irish grandparents had talked about. In recent years, the GAA moved further beyond the traditional hubs of the Irish diaspora – Chicago, Milwaukee, Boston, and New York – and today funds more than 100 clubs in 10 divisions.

The Roc City calendar is split between summer and winter seasons. Summer matches – men's hurling, co-ed hurling, and women's camogie – are held at Aardvark Park in Henrietta. When the weather turns, the club moves to the turf of Total Sports Experience in East Rochester for informal scrimmages. Skill-levels run the gamut, from those of lifelong Irish players to first-timers looking to join something new.

Scrimmages take on the casual vibe of a dodgeball league, with comradery trumping competition. Cheers drown arguments. The goalie lost a bet and now plays (surprisingly well) in a traditional kilt. Club members meet up for drinks post-scrimmages at a rotating cast of sponsor bars including The Angry Goat and Johnny's Irish Pub.

Yet the physical exertion of hurling goes beyond a typical beer league. Under every helmet is a flushed face. The game is rarely paused, and only substitutions and halftime offer respites from perpetual pursuits. Top players can smack the sliotar 75 yards at any time down a pitch longer than a football field.

"I've yet to meet someone that shows up and has not felt overwhelmed by it within 30 minutes," said Neville Morgan, who emigrated to Rochester from his hometown of Limerick, Ireland, in 2010.  "But then after just getting out there and letting loose, they all fall in love."

"Bumpy is a good word for it," Thomas says, "because we got bumped around a lot." The first game ended in a 40-point loss. The other teams were bigger and younger, with median ages in the 20's. Akron and Pittsburgh positioned faster players in the center and rapidly cycled through substitutes for rest. Roc City licked their wounds and learned.

"We got schooled very quickly," Morgan says. "After that, it wasn't a problem. We earned a lot of respect the second time through the schedule."

With rising women's participation, Roc City looks to field its own GAA camogie team. For now, the women who want to compete in travel leagues link up with the camogie teams of other cities. "The ladies are growing their side of the roster at a very rapid rate," Morgan says.

In the rut of the post-2008 recession, Morgan joined many of his countrymen who left Ireland to find better employment. "Our economy has crashed many times throughout our history," he says. "The Irish tend to spread their wings and fly to where we can make a living and create a life for our families."

After landing in Rochester with a management role at TGI Fridays, Morgan joined Roc City during its inaugural season. He stored his wooden hurleys in the bathroom to keep them from cracking in the cold. As one of the few players who grew up around hurling, Morgan gave impromptu lessons on subtle techniques: hand placements, positioning, and body control. The trick to offense, he told other team members, is to actually play closer to your opponent. By the end of the first season, he was an honorary coach. 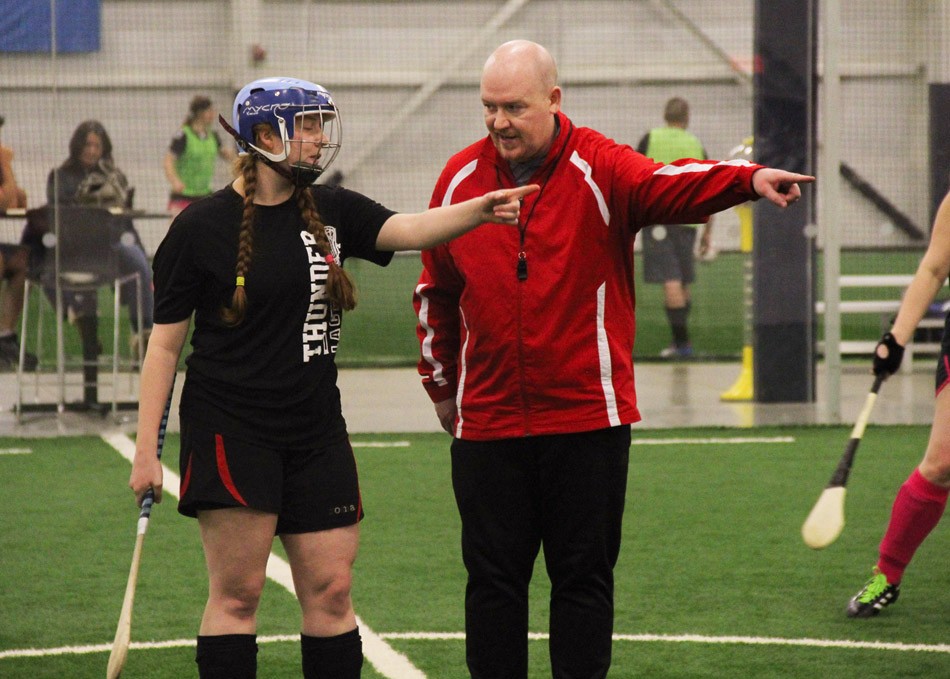 In May of the second season, Morgan noticed a newcomer with reddish-brown hair named Jessica Frey. "We were sitting by the pitch getting ready to play," Morgan says. "By that time, there still weren't many females playing, so she caught my eye." Morgan was quick to help Frey with her swing mechanics. Frey reciprocated with the hesitant signs of a crush, sparking conversations and sharing jokes with the Irish bloke who knew more about hurley than anyone she'd ever met.

"I pursued him more than anything," Frey says. Two months of practice banter led to dating, which led to a New Year's Day proposal in 2018. The wedding is in May with a later celebration scheduled in Ireland. Frey and Morgan left an open invitation to their Roc City teammate, and so far, 12 have agreed to make the 3000-mile trip. Their marriage embodies hurling and camogie as Ireland's finest global ambassadors. The party will be held in a hurling stadium.

"Our only arguments center on hurling," Frey says. "Who should have been in that position and who should have made that tackle." St. Patrick's Days, the 4th of July, and Christmases intertwine with the game that brought them together. They go holiday caroling with the hurling club. "For me, hurling has played an intricate role in understanding his culture," Frey says.

Every player in Ireland, even the best, is an amateur, earning no pay for the performance on the field. That means each county supports its native players, its neighbors, toward collective athletic ambitions. The provincial origins of hurling and camogie bleed into the club. "We talk about clans a lot back home," Morgan said. "Well, Roc City Hurling is one big clan."