Wild foraged foods are on the menus at these Rochester restaurants 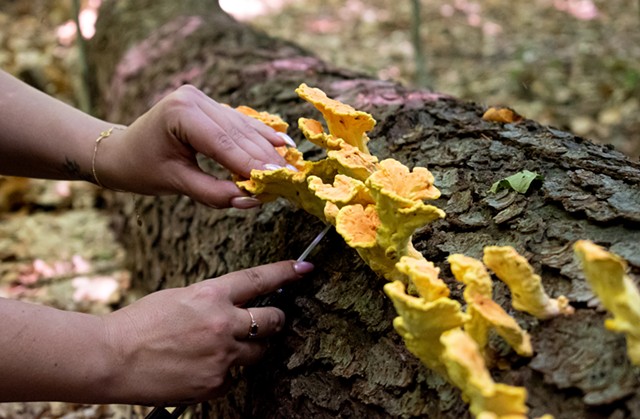 On a sunny August morning, the pink-haired owner of Black Adder Beauty Bar, a Rochester salon, who goes by Dk, set out on a trail hike in a suburban county park with her teacup Yorkie-Shih-Tzu mix Ayla in her backpack.

But unlike the other hikers, Dk wasn’t there for fresh air and exercise.
She was there to check on a few of the secret, sylvan places where she had previously spotted some wild mushrooms growing on rotting logs and living hardwood trees. The particular species of fungus, Laetiporus sulphureus, is dubbed “chicken-of-the-woods” for its textural resemblance to poultry and is a prized, seasonal ingredient in dishes offered by local restaurants. The vivid orange, ruffle-shaped mushroom is so versatile it can be used as a vegetarian stand-in for chicken parmesan, chicken nuggets, or barbecued pulled chicken. 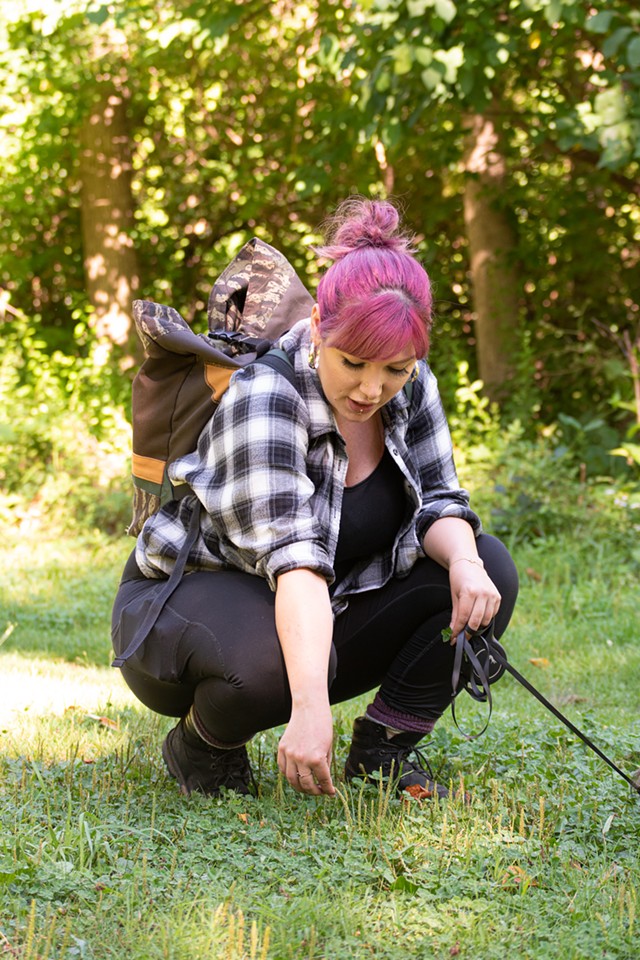 Foraged mushrooms can fetch a hefty fee. Rodrigue O’Flaherty, the chef at The Revelry, said last year he paid a forager $20 per pound for 20 pounds of chanterelle mushrooms.

With any luck, the chicken clusters that Dk spotted would be untouched by other foragers and ready to harvest and haul back to the city, where she would supply them to chefs at Happy Gut Sanctuary and The Revelry.

Dk hustles foraging wild food — from greens to berries, fungi, flowers, herbs, and other plants — under the social media moniker The Foragette. She’s part of a growing number of people who supply these edible finds to local chefs who want to work with foods that can’t be cultivated and mass-produced, such as the peppery and meaty chanterelles, marshmallow-like puffball mushrooms, and smokey black trumpets that can be found in regional woods and fields.

“A pocket of warmer weather and humidity after a good rainfall is ideal for their growth,” Dk said.

During the fall, foraged food — and fungi in particular — hits the plates at select Rochester restaurants in a serious but subtle way. Foragers fresh from the forest show up at the kitchens of The Revelry, Lento, Restaurant Good Luck, and others, peddling their bounties to creative chefs who incorporate these items into specials served to customers almost immediately.

Foraging for wild food is more than just a walk in the park. Dk estimates that she forages three or four times a week at different locations, averaging about four hours per walk. Others, who forage full-time, camp out in the woods and emerge days later with their hauls, heading straight to restaurants to negotiate a sale.
Responsible foragers are careful not to overharvest, so the plants can propagate themselves. Something is always left behind. 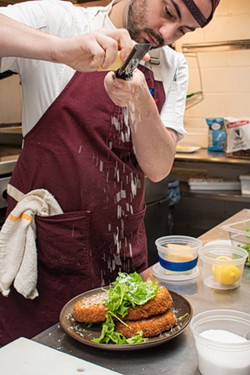 Dk recently presented several pounds of puffballs to O’Flaherty at The Revelry.

O’Flaherty prepared a test meal for a guinea pig staffer, breading and deep-frying a few thick slices of the delicate, pillowy mushroom and laying them on a bed of greens. He finished them with salt, a dusting of parmesan cheese, and some spritzes of lemon.

It smelled divine, looked exactly like a chicken or veal cutlet, and had an audible, satisfying crunch when the staffer bit into it.

A MATTER OF TRUST

The park Dk hiked — the location of which is being withheld to ward off her competitors — has more than 500 acres of off-trail, cathedral-like woods. Walking them, she cast long gazes for specific colors and shapes and visited familiar breeding grounds. “A lot of it is just walking and keeping your eyes to the ground, which funny enough, is something my parents would give me a hard time about, growing up,” Dk said with a smirk. “It worked out in my favor.”

Some eateries offer dishes with foraged food items from spring through autumn, but there’s a distinct boom in the fall of fungi, the “fruit” in season. Most foraged items are not on a regular menu. They tend to pop up, like they do in the woods, as specials announced by the wait staff or on restaurants’ social media posts within a day or so of arriving at the restaurant.

“Foraged food is always a nice addition to a menu, because it just keeps things interesting,” said Dan Martello, chef and co-owner of Restaurant Good Luck, Cure, and Lucky’s. “And most restaurants that use foraged food are probably chef-driven, so the customers that are coming in are expecting those sorts of special items on the menu.” 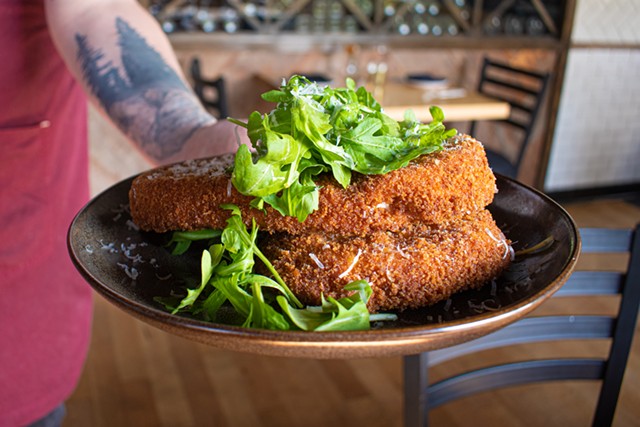 Martello buys foraged items for his restaurants from a group of individual foragers he trusts, and recently received and featured chicken-of-the-woods and wine cap mushrooms.

He said he has worked with foragers for about 20 years, and that the gatherers he works with are just as passionate about what they do as he is about cooking. The items they bring in tend to be pristine and beautiful, he said, and more flavorful than mass-produced food.

“So we really try not to manipulate it too much,” Martello said. “Just like a quick sauté, and if we have an extraordinary amount, we might pickle some just to kind of get a little longevity out of them.”

Flavor aside, foraging is at its heart a matter of trust. The idea of eating things someone found in the woods — particularly mushrooms, which can have deadly “look-alikes” — can make diners understandably nervous. The reputations of the foragers, the chefs, the restaurants, are all on the line.

Martello and other chefs who use foraged items say they educate themselves about the species they accept, and tend to shy away from things other than the easily-identifiable flora and fungi.

They also don’t accept foraged food from just anybody. Everything has to be verified with a state-certified mushroom expert. Often, those experts are the foragers themselves. Restaurants also keep verifications on file for a minimum of 30 days along with information about where the item was found and by whom.

A LIFETIME OF FORAGING

Dk, who grew up foraging on her parents’ 80 acres of defunct farmland, is working on getting state-certified.

Her involvement in foraging for restaurants was, like so many things, a result of the pandemic disrupting her life. Forced to shut down her salon for a while and without income, she took to the woods.

“Foraging to supplement my meals was just an easy way to save money and cut costs,” she said. 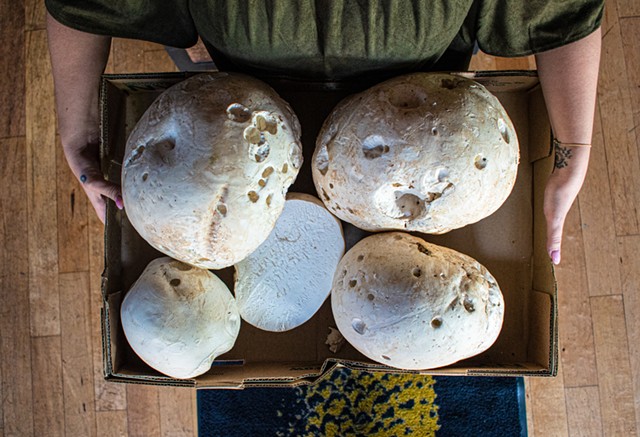 She soon found just how in-demand her skills could be. She estimated that she harvested and sold 95 pounds of “chicken-of-the-woods" last year, sourced from a variety of spots.

“This year has just been hard with the lack of rain,” she said. “But now that the rain has come, we should have a great fall season.”

O’Flaherty and Dk are collaborating on a five-course foraged food dinner set for Oct. 27, during which she’ll discuss the foraged contents of the meal and O’Flaherty will discuss how the meal was prepared. They’re hoping to seat at least 20.

The exact contents of the dinner are subject to change, but they are planning for a local greens salad that may include mustard greens, dandelion greens, and wood sorrel, with wild blackberries and a vinaigrette using garlic scapes that Dk pickled. Another planned course will feature a French-style ragout with braised puffball mushrooms to go with short ribs. They hope to finish the meal with a tart made from foraged crabapples and strawberries with dandelion honey. 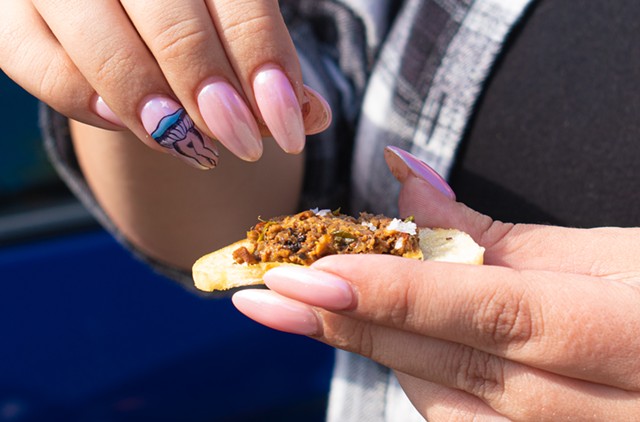 For diners hoping to catch these rare ingredients in local cuisines, the best bet is to watch the social media accounts of spots that use foraged food, including The Revelry, Happy Gut Sanctuary, Lento, Restaurant Good Luck, Cure, Lucky’s, and Atlas Eats.

The lack of rain through much of the summer has the forager’s harvest looking lean, though.

“Local chanterelles and black trumpets, usually I'm flush with them right now, but because of the lack of rain, I haven't gotten any,” Art Rogers, the owner-chef at Lento, told CITY in early September.

Rogers both works with a network of foragers and forages himself. He learned how while living in Maine nearly 20 years ago, when he foraged stinging nettles, ramps, and mushrooms. These days foragers bring mushrooms to Rogers, but he still harvests ramps for use at Lento on private land owned by his aunt and uncle.

Rogers said that using wild-foraged food is something that fits with Lento’s local-focus ethos, which also emphasizes the use of plants and meats from local farms.
In a typical spring-to-fall season, he said, he’s able to regularly include wild-foraged fungi in his meals. He has used foraged mushrooms for bruschetta, pasta, and to top off a steak.

“You don't have to do much to make them shine,” he said. “Just sauté them in butter with a little bit of herbs. I don't mess with them too much.”

This article has been updated to correct a mushroom's identification.