When the show must go on

PHOTO COURTESY BLACKFRIARS THEATRE Blackfriars Theatre has presented a variety of virtual productions during quarantine, from theater and comedy to couch concerts (pictured) and a playreading "book club."
Theaters don’t have the green light to reopen, but there are signs of theatrical life — if you know where to look for them.

September marks six months since the lights dimmed on Broadway and local performing arts companies closed their doors in response to the pandemic. Whatever happened to "The show must go on?"

That the upcoming performing arts season will be a shadow of its usual self is a given. But there are signs of theatrical life, if you know where to look for them.

Although the health crisis has shuttered Broadway at least through the end of the year, Rochester theater companies are finding ways to stage productions that meet their audiences where they are — which at this point is everywhere but the theater. Still, plans are afoot to stage some live performances in 2021.

Blackfriars Theatre had announced a robust 2020-21 season in March, four days before it was forced to close its doors.

Artistic Director Danny Hoskins says the theater is now looking to stage a run of six shows from January through July, among them three shows from its original slate of productions.

Those shows include: the hit coming-of-age soccer play, "The Wolves," to be staged in March through a partnership with the Nazareth College Department of Theatre and Dance, in which students will play all the parts; a new one-man show, "Every Brilliant Thing," scheduled to run in June; and "Godspell," to launch in July as part of the Blackfriars Theatre Summer Intensive Program (BTSI), a program for high school and early college students.

The other three shows that would round out the season have yet to be announced.

"We've been closed since March 13, so I've had a lot of time to think, to observe, and to spend time with family, and maybe my outlook is colored by that, but my hope for the upcoming season is an optimistic one," Hoskins says. "I hope our stories and our relationships will be told with more inclusivity and with diverse partners, participants, and audiences."

The team transitioned almost immediately to Zoom, producing "BT Couch Concerts," a series of videos featuring past performers and alumni of BTSI. The videos were filmed by the performers at home, posted at a set time each week, and then saved on BT's YouTube channel for viewers to watch at their leisure.

For patrons who want to get involved, the "BT Book Club," which is still running, provides a weekly play reading assignment followed by a Zoom meetup discussion.

Lastly, BT's comedy-crew-in-residence, Unleashed, has been performing "Cabin Fever Improv" via Zoom every other Friday. All these online performances are free, but donations to the theater are strongly encouraged. 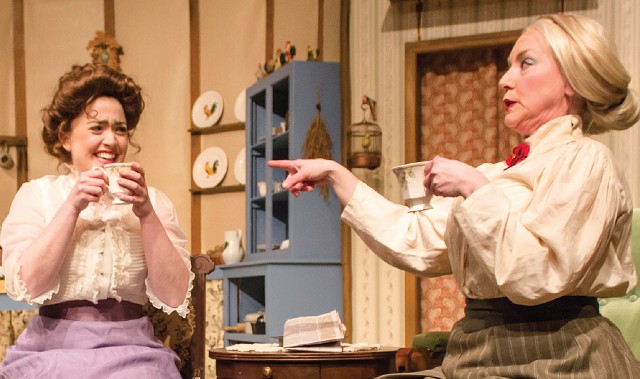 The closures have taken a financial toll on Rochester performing arts companies and venues. Though Blackfriars was able to get a federal loan to make up for some revenue losses, there has been little to no other help available for non-profits on a local or state level.

"I hope our city and state recognize how vital the arts are to our well-being and our humanity, and make a commitment to ensure our significance with financial and sustainable support," Hoskins says.

Blackfriars will take its Season Soirée — a big annual fundraiser — completely online in November, and is experimenting with a membership model rather than a subscription tied to assigned seating, in case live shows are not permitted for some or all of the upcoming season.

But it's getting ready to launch a reimagined season this fall, beginning with "Recognition Radio: An Audio Play Festival Celebrating Black Voices," produced by local theater artist Esther Winter and featuring four plays performed as immersive sound experiences. Titles for the fall lineup will be announced in September, and tickets for individual shows or a package of all four will be available after that.

Geva's annual holiday offering, "A Christmas Carol," will not take place this December, but the theatre isn't bah-humbugging the holiday season. Geva has plans to stage five in-person productions — four plays and one musical — beginning in January. The theater will make on-demand video recordings available for those who still don't feel comfortable attending live performances.

JCC Centerstage has many non-traditional spaces conducive to social distancing at its venue. At this point, however, Artistic Director Ralph Meranto isn't optimistic about resuming in-person performances.

"We announced a season with the expectation that we could perform, and we're lucky to have those spaces," he says. "But what's been more challenging has been to have the actors rehearse and perform with social-distancing because they can't be masked and perform."

JCC CenterStage recently cast "Gloria," a play about the life of journalist and feminist Gloria Steinem, completely via video auditions and Zoom callbacks. The show is set to be performed in mid-October; and rehearsals are taking place over Zoom.

"It's the 100th anniversary of women's right to vote, so it's the perfect way to honor that, and important to perform this before the election," Meranto says.

Fortunately, "Gloria" is a presentational piece in which most of the actors speak directly to the audience, so there's still a possibility that a small audience could attend a live show.

Other companies have gotten creative, too.

Wallbyrd held a fantastically costumed, live-streamed reading of "Alice's Adventures in Wonderland" for several months. Grey Noise Theatre Co.performed an original work, "Sharks," based on August Strindberg's "Creditors," and in mid-July hosted a virtual conference, "The Diversity Dialogues: BIPOC in ROC Theatre." But both companies still need to drive income, so now they and other venues in town — The Avenue Blackbox Theatre and the Multi-use Community Cultural Center (MuCCC), to name a few — are on indefinite hiatus.

Rochester Broadway Theater League (RBTL), which hosts touring Broadway shows at the Auditorium Theatre, has yet to cancel "Cats" (set for December 15 through 20). Beyond that, its full, six-show season is planned to begin in January 2021 and stretch through October 2021.

As for local dance companies, most (including Garth Fagan, Rochester City Ballet, and Frazee Feet Dance) will continue to offer virtual-only classes or performances, and have indefinitely suspended any live shows due to rehearsal and physical-distancing limitations. One exception is PUSH Physical Theatre, which held a fundraiser for its new piece, tentatively titled "The Trunk Show," to be performed during this month's KeyBank Rochester Fringe Festival, an all-virtual affair, running (September 15 through 26).

While it feels like this fall will largely be a repeat of what's taken place for the last five months — lots of digital content, plenty of pivoting — there's a mounting need for local theater patrons to donate.

"There's so much online content it's hard to see the value in paying for it," Meranto says. "But I'm hoping people will understand it's part of supporting your local theater company, so when this is over we'll still be here. This is going to be the death of some theater companies. It's going to mean the demise of some of the great art we have in this community."

Leah Stacy is a freelance writer for CITY. Feedback on this article can be directed to Rebecca Rafferty, CITY's arts & entertainment editor, at becca@rochester-citynews.com.