About 150 leaders in local government, finance, and real estate, gathered on a recent afternoon over coffee and cookies at the Rochester Riverside Convention Center to learn how wealthy people can avoid paying taxes by investing in blighted city neighborhoods.

The gathering, hosted by the administration of Mayor Lovely Warren, was dubbed the "Opportunity Zones Investment Summit" and sung the promises of a tax break written into President Donald Trump's Tax Cut and Jobs Act of 2017. 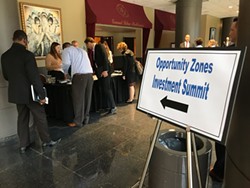 The stated goal of the tax break is to entice investors to pump cash into communities that need it most - so-called "opportunity zones" - ideally leading to new housing, businesses, jobs, and an overall higher quality of life for the people who live there.

Here's how it works on paper:

People who sell stocks or other investments for a profit can delay paying taxes on that profit if they sink the proceeds into projects in federally qualified opportunity zones. There are 514 of these zones in New York, including 18 in Rochester.

Investing in these zones requires depositing money into a "qualified opportunity fund," which is a vehicle for financing projects in opportunity zones.

The potential savings are substantial. If investors hold their investment for five years, they'll get a 10 percent discount on the taxes they owe today. After seven years, the discount rises to 15 percent. At 10 years, any profit they make on the investment is tax-free.

The "oohs" and "aahs" from the audience were audible. Some had come from Buffalo and Syracuse to hear the presentation and the panels of experts - lawyers, accountants, and money managers - who hoped to fuel a wave of development here.

Potential investors were invited the next day to attend a golf outing at Ridgemont Country Club in Greece and tour opportunity zone sites desperate for attention, like Xerox Square and the First Federal Building downtown.

Rochester has yet to see any significant investment in its 18 zones, which encompass large swaths of the city, including downtown, the 19th Ward, Eastman Business Park, the North Clinton Avenue neighborhood, among other locations.

"We believe opportunity zones are just a tool in the toolbox that will take us to the next level, not just downtown," Warren said in her opening remarks. "It is a way we believe we can revitalize every quarter of our city."

Pumping cash into economically-distressed neighborhoods could do a lot of good for the people living there, and help investors save or earn a lot of money.

But there is some evidence thus far that the investments could end up doing little more for Rochester than enriching the people running the funds.

A recent New York Times investigation found the opportunity zone program appears to be a windfall for the wealthy, with investments being poured into high-end apartment buildings, hotels, and office towers in cities around the country.

In some cases, the Times reported, money is flowing to the lowest-risk, highest-return projects, and many of the projects whose investors will now enjoy a tax break were underway long before the opportunity zones existed.

One potentially troubling aspect of the law is that it doesn't require the funds to publicly disclose how their capital is deployed, making it difficult for the federal government, or anyone, to quantify how the investments benefit the poor versus the wealthy.

All the law requires for a "benefit" to be provided is for the investment to create a "substantial improvement," meaning an increase in the value of the property over a 30-month period.

An argument could be made that any increase in the value of a property in a low-income neighborhood is a good thing. But how that precisely elevates the station of residents in those neighborhoods is another question.

Some officials in other cities, including New York City, are considering local legislation to require more transparency for investors to receive complementary local tax breaks.

A recent report by the fiscal policy think tank Citizens Budget Commission recommended the state explore passing a bill that would reserve state tax benefits for residential projects that meet a minimum affordability threshold for residents.

Rochester officials should closely monitor developments on those fronts and apply pressure where they can to ensure investors do as much to benefit the poor as themselves.

Baye Muhammad, the CEO of the Rochester Economic Development Corp., the city's nonprofit economic development arm, cautioned the audience that opportunity zone projects should improve services to vulnerable populations, such as transportation, education, and retail.

"Do not lose focus on the equitable part of this program and who we are actually trying to service outside of ourselves sitting here today," Muhammad said.

Let's hope for the sake of the city's neediest residents, and the health of the entire region, investors heed his words.