When 'om' can help you take care of mom

Then, perhaps, she recites an inspirational quote or a poem to set the mood. One of her favorites is from the 13th-century Persian poet, Rumi. It encourages the reader to welcome even the most disturbing thoughts and emotions as a potential means to clear the way for an unexpected delight.

Meditation has become an integral part of Gansemer’s life since she became the primary caregiver to her parents four years ago, when she moved them from Pennsylvania to an independent senior community a few miles from her Penfield home.

Her 93-year-old father has suffered two strokes and brain cancer. Her 89-year-old mother has been diagnosed with Alzheimer’s disease. She is in contact with them every day, managing their health care and taking them to medical appointments, doing their grocery shopping, and running errands for them.

“There are different draws on me at times that can be pretty intense in terms of caregiving,” Gansemer, 62, said. 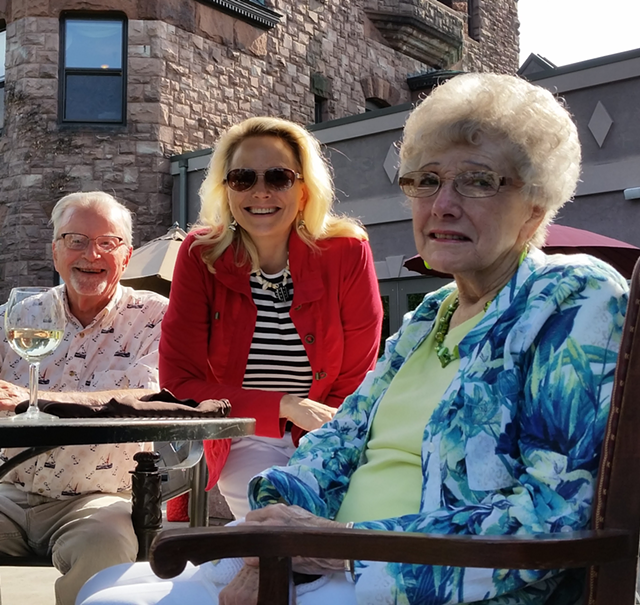 Sometimes, she said, their health crises coincide with the needs of another family member with mental illness who also relies on Gansemer for help. “That, literally, is almost next to impossible to handle,” she said.

Caregiving can be a moving experience. But it can also take an emotional and physical toll on even the most resilient caregivers, whose needs are often overlooked by a healthcare system focused on patients.

A 2018 study from the Alzheimer’s Association found that as many as 40 percent of caregivers reported symptoms of depression, and other research shows that the immune system can be weakened by the stress of caregiving, leaving caregivers vulnerable to illness.

But Gansemer, a Xerox retiree whose physical pursuits include playing paddle tennis and taking long bike rides, has found meditation helps her cope. She is not alone.

Research has shown that simple daily meditation reduces the stress level of people who care for those stricken by Alzheimer’s. Gansemer discovered meditation when she started practicing yoga. Soon, she was meditating every day.

“It calms you down, evens you out, centers you, so you’re not as reactive,” Gansemer explained.

‘Who are the most stressed people on the planet?’

Numerous studies have shown the multiple benefits of meditation.

But in 2012, Dr. Helen Lavretsky, a professor of psychiatry at UCLA, examined whether meditation could help caregivers in particular, specifically those tending to loved ones with Alzheimer’s or dementia. She thought they would be the perfect population to study.

“I said,” Lavretsky explained, “‘Who are the most stressed people on the planet?’”

In the randomized study, one group of caretakers for people with dementia was told to do a guided chanting meditation for 11 minutes each day for eight weeks.

Compared to a control group of caretakers, who simply listened to relaxing music while lying or sitting down, the meditation group showed improved mood, resilience, and cognitive performance, along with changes in neurological biomarkers of aging.

Inflammation of the immune system can contribute to a multitude of chronic health problems. The takeaway for caregivers: It doesn’t take much time or effort to reduce the effects of stress.

Even slowing down breathing to four to six breaths a minute is known to calm the central nervous system, Lavretsky said.

“Blood pressure drops, heart rate drops, and a sense of calm comes in,” she added. “I ask patients to do that for three to five minutes and maybe have quiet music along with it.”

That kind of slow and steady breathing is how Gansemer focuses during her meditation sessions. When it comes to self-care, Gansemer ranks the ritual right behind her daily exercise program and carving out personal time for herself.

“I wouldn’t be the same person if I wasn’t meditating. I’d probably be a lot more amped up, hyped up at times,” she said with a laugh. “I’m a pretty energetic person, and sometimes I need to bring that down a few notches.”

Gansemer sometimes takes meditative walks. Another name for this is “mindfulness,” or “mindful movement,” which has been shown to have some of the same benefits as meditation.

A 2018 Penn State study, for example, found that while students reported less stress when walking, they experienced even less anxiety and fewer negative thoughts when they combined walking with a focus on their breathing and surroundings.

The terms “meditation" and “mindfulness” are sometimes used interchangeably, but there are distinctions between the two.

Mindfulness can be described as a way of living. A person can be mindful — that is, immersed in the current moment — while doing just about anything, like washing dishes or walking.

“I think the word ‘mindfulness’ can sometimes put out a welcome mat that is accessible and enticing, perhaps not inherently or by projection, associated with religious practice that a person might not be connected with,” said Harrison Blum, director of religious and spiritual life at Amherst College in Massachusetts.

He has put a lot of thought into making Buddhist meditation and secular mindfulness training accessible to people regardless of their religious, racial, or socioeconomic status.

“In the first night, when I asked people why they chose to come to that class,” he recalled, “two out of the eight people broke down crying, talking about how challenging their lives were.”

Blum said one woman told him she had wanted to learn meditation for years, but she could never get to a class at the Buddhist center just a half-mile away because she couldn’t afford to pay someone to babysit her children.

Moving a meditation class to where people are, rather than asking them to come to a Buddhist center, might also help people overcome other potential roadblocks, Blum said.

“A secular or Christian person going into a Buddhist center may be a bridge too far,” he added. “But a Buddhist teacher partnering with and having the sensitivities needed to work with and teach from a community center with a different population can be, perhaps, a way to make accessible teaching across some of those cultural barriers.”

Access to training has not been a problem for Lisa Thompson of Rochester, who cares for her parents.

“I’ve tried a little bit of meditation,” she said, “I think that mindfulness is more of my thing.”

Thompson’s parents moved into her home three years ago when her father, who is in his mid-80s, began losing his sight.

“I’m originally from Jamaica, and in our culture, you take care of old family members,” she said.

She shares caregiving duties with her three sisters, so she doesn’t feel overwhelmed. But Thompson handles day-to-day tasks for her parents such as shopping, filling prescriptions, and helping them with anything else they need.
Thompson learned about mindfulness at a retreat at Keuka College, where she works.

“It really has changed my life,” said Thompson, who believes she is more patient and understanding and has a better sense of self.

Her definition of mindfulness is being present in everything she does, from her daily exercise routine to conversations with her parents.

“So often, my mind will stray,” she said. “It will drift off, and I will catch myself and bring myself back. And so on a constant basis, I’m working to stay present.”

If time and access are barriers to learning and practicing meditation, apps are an option for those who have a computer or a smartphone.

A number of apps can be downloaded for free, including Care for Caregivers, an app offered by the Garrison Institute.

It features brief videos of guided meditations, some of which are led by world-renowned meditation teacher and best-selling author Sharon Salzberg. In one of the videos, she describes how practicing mindfulness by focusing on body movements is probably the easiest way to overcome excessive worry and rumination.

“If we are just walking down the corridor, rather than being lost in a fantasy about what is coming next, feel your feet touching the ground,” she says. “Feel your body moving through space, something like that, and you’ll find that it’s a very different day.”

Apps like these are among the tools that Katie Badeau recommends to the stressed and burned-out people she works with as a caregiver coordinator at the Western New York chapter of the Alzheimer’s Association.

Caregiver support group meetings have moved online during the coronavirus pandemic, and she said not all caregivers are tech-savvy or even interested in a virtual meeting.

So Badeau tries to educate them on, say, what a simple deep breathing exercise can do to relax and center them.

“You know, if you’re stressed enough, sometimes you’re willing to try anything,” she said. “Our options are limited here, we’re stuck at home, give it a shot.”

There is a stigma for caregivers around seeking support and admitting they sometimes need help, too, Badeau said.

Indeed, Thompson said she used to feel guilty about taking time off. But she learned that if she reserves every Saturday just for herself, it makes her a better caretaker for her parents.

Her advice to other caregivers: “Take the time that you need, because if you’re not well, then those around you won’t be able to get the support they need from you.”

This story was produced through the New York & Michigan Solutions Journalism Collaborative, a partnership of news organizations and universities dedicated to rigorous and compelling reporting about successful responses to social problems. The group is supported by the Solutions Journalism Network.