When art speaks louder than words 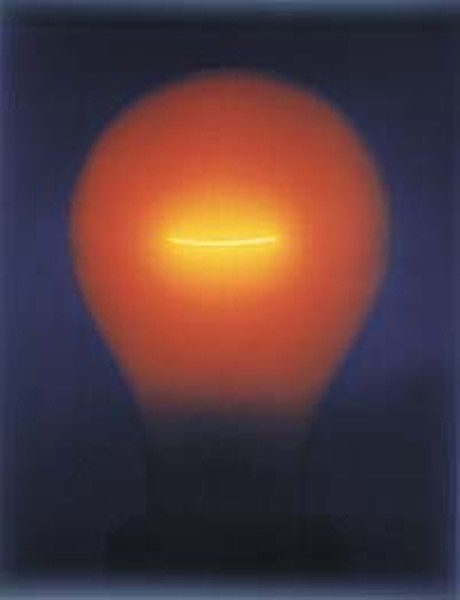 It's hard to write about art that is just beautiful. Or perhaps I should say, mostly beautiful. The artists whose work is on show at the Visual Studies Workshop are variously able to elaborate on spiritual dimensions... philosophical connections... historical underpinnings. But I find most of it unnecessary. For me, the value of their work lies primarily in its visual impact. It's like trying to talk about a painting by Rothko: Neither my words nor the artist's will ever bear comparison with a face-to-face experience of the work itself.

Light Index, curated by Scott Laird, presents the work of three quite different artists who focus their energies on the same theme: light. Photography is the logical medium with which to explore this phenomenon, but none of these artists are photographers in the traditional sense. They all use light-sensitive materials, but not all of them use a lens, camera, or, for that matter, film.

Erika Blumenfeld exposes Polaroids and sheets of Ilfochrome paper directly to light in order to make an abstract document of the quality or quantity of light at a particular time of day or year. She once spent a day in a transparent plastic tent in the desert, recording the winter solstice by taking a Polaroid every minute from dawn till dusk. Such experiments result in hundreds of pictures, which she subsequently arranges on the floor or pins to the gallery wall in large grids.

Her favorite method of introducing light to photographic material is to allow it to seep across the picture plane from one side, creating graduating arcs of white that glow with varying intensities. Many of them are simply called Light Leaks, but the bluntness of the title belies the sumptuous elegance of the result.

The strongest work for me, however, is Light Recording: Midnight/Midday, which takes her preoccupation to its extreme conclusion. She fully exposed nine 20" x 24" sheets of Ilfochrome paper to light at midday and then repeated the process with nine more at midnight. Predictably, the first group came out completely white and the second completely black. But their sophisticated presentation in two perfectly aligned grids on the wall transforms them from 18 dumb sheets of paper into a refined meditation on the essence of her craft.

My only quibble with Blumenfeld is in the things she says about her work. It's those pesky words again, getting in the way. According to her artist's statement, the pushpins that fix her grids of Polaroids to the wall "denote the elusiveness of time, and the absence of certainty;" the grid structure "speaks of sacred geometry and the mathematics inherent in nature."

How exactly do pushpins denote the absence of certainty? Call me insensitive, but it seems to me that the pins are just a very practical way of holding the photographs together. Perhaps, for Blumenfeld, the grids really do contain intimations of the divine, but I find her glib enunciation of it unconvincing.

Fear of the "decorative" also seems to haunt Ellen Carey. She repeatedly allies herself with established masters, citing Dan Flavin, Ellsworth Kelly, Agnes Martin, Sol LeWitt, and Donald Judd as influences. And she peppers her artist's statement with the names of such noted theorists as Rudolf Arnheim, Roland Barthes, and Susan Sontag. In one particularly bizarre sentence, she observes that Arnheim's "basic thesis that art has two structures (the circle and the square) can be seen in connection with my use of the photographic apparatus with its circular lens and rectangular camera body."

But don't let my snide tone confuse you. I love her photographs. Their saturated hues and seductively plunging forms literally make my jaw drop. Carey uses a 20" x 24" Polaroid camera to photograph pure fields of color. Then, by manipulating the mechanism, rolling the light sensitive paper to and fro, and making multiple exposures, she conjures up long swooping expanses of sensory delight. Measuring up to seven feet long, and hanging loosely down the wall, they resemble giant tongues. A darker, but equally fleshy, note is struck by the more subdued colors of the negatives, which are also on display.

I linger on the sheer physical beauty of her work in an effort to redress my cruel opening remarks, but I cannot resist one last dig: Later in the same statement, she implies that her work "has a sublime presence and a timeless eloquence that not only challenges ideas about what is and is not art, but also carries with it spiritual and perceptual overtones that are existentially self-defining." Unfortunately, the harder she tries to invest her work with meaning, the less I believe it.

In contrast with the others, Amanda Means tends to eschew hypothesis and discusses her work in a rather more straightforward manner. In fact, she is quite reticent, limiting herself to brief explanations of her technique and the occasional autobiographical anecdote. The subject of her photographs is the light bulb, in all its various shapes and sizes. She uses a horizontal enlarger to project light through the bulbs, both lit and unlit, onto large sheets of photographic paper. The results are startling in their boldness and simplicity --- who would imagine that such everyday objects could generate such stunning shadows?

My favorite piece, Light Bulb Grid, combines six large black and white photographs of different bulbs. With their tones reversed they take on an otherworldly quality, and the twisting filaments within look like brains fizzing with activity. Hung high on the wall, they stare menacingly down at us like some nightmarish jury of the future. Means has also experimented with large-format color Polaroids, but of these it is the darker, more mysterious ones that are most successful. Light Bulb 00050C emits a vaguely brooding presence as its orange glow looms gently through a deep blue fog.

The art critic Dave Hickey once remarked, "I have argued over the years for the case of dangerous beauty, the disturbing nature of things that are exquisite, sexy, and colorful." It is a kind of beauty that words cannot easily define, and with that in mind I'll cut my ruminations short. Go see Light Index. It's not dangerous, nor is it particularly disturbing. It's colorful, sexy, and exquisite.