What to expect at the 2019 CGI Rochester International Jazz Festival 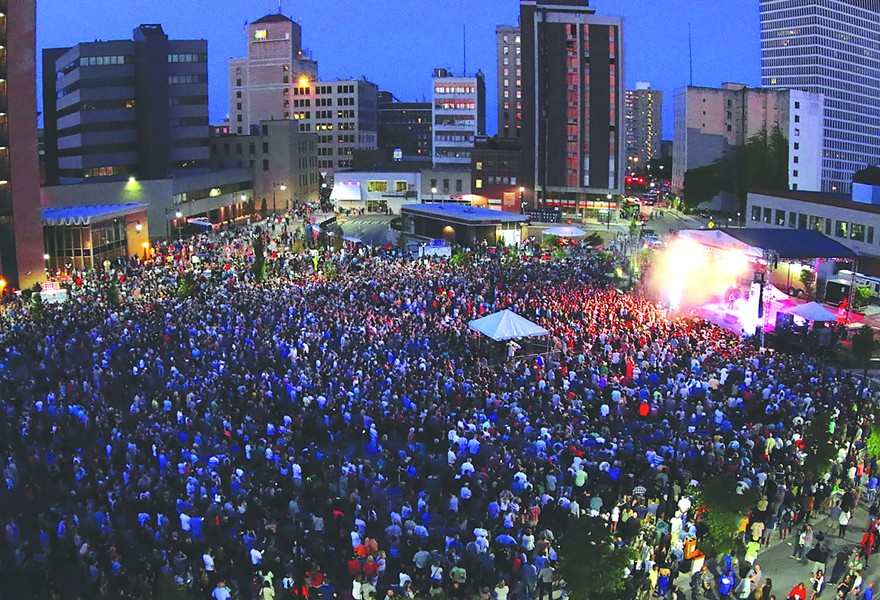 Indeed, when the music begins at 4:30 p.m. Friday with the West Irondequoit Jazz Band tootling the first notes on a closed-off Gibbs Street, change is the one constant at what is now recognized as one of the most significant jazz festivals in the country.

“We’re at the mercy of the lay of the land,” Nugent says.

The newest and most significant development at the festival is music throughout all nine nights on the famous gravel lot known as Parcel 5. That includes the Squeezers Stage @ M&T Pavilion, a long white tent that can accommodate 1,000 people at the East Main Street end of Parcel 5. There, the rock band Teagan & the Tweeds opens the 4:30 p.m. series of free shows, which features a strong lineup of local acts such as the Zion Hill Mass Choir and the Herb Smith Freedom Trio. That slot evolves later in the evening to the Club Pass shows: once again, there are diverse offerings, from funk-jazz bassist Richie Goods on opening night to Gregg Allman Band guitarist Scott Sharrard and Rochester’s rocking sacred-steel stars, the Campbell Brothers, later in the week.

By the final two nights of the festival, the Squeezers Stage @ M&T Pavilion gives way to the gentle rumble of food-truck generators and the big free shows on Midtown Stage at the opposite end of Parcel 5. It’ll be the Allman Betts Band – that’s Allman Brothers Band progeny Devon Allman and Duane Betts – on June 28 and festival favorite Trombone Shorty & Orleans Avenue on the festival’s final night, June 29.

Nugent and Co-producer and Executive Director Marc Iacona’s plan seems to be that this beehive of Parcel 5 activity will offset the loss of two of the festival’s largest indoor venues in past years, Harro East Ballroom and Anthology. The relationship between the fest and those two venues ended acrimoniously. Along with The Little Theatre out of the lineup because of renovations, and Xerox Auditorium unavailable, we’re seeing the fest slide away from the East Avenue corridor that once included the Lyric Theatre and what just a few years ago was the venue that drew the largest throngs of the festival, the stage at the intersection of East Avenue and Alexander Street.

So while the festival dominates downtown for nine days, not every business is on board. “If they don’t choose to participate, that’s their prerogative,” Nugent says. He’s fairly Zen about the changes, with the always-present danger that next year Parcel 5 may be pulled from the lineup if real-estate developers get their hands on it. For a city to draw people downtown, Nugent concedes, it needs a mix of retail, restaurants and green space — what he calls “a critical mass.” Perhaps Parcel 5 will become all three.

But that’s for another day. “Politics is politics and music is music,” Nugent says.

Moving on to the music and what is likely to be a big opening weekend — considering the promising weather forecast — the Kodak Hall at Eastman Theatre ticketed series opens with The Steve Gadd Band on Friday. A Rochester native and Eastman School of Music grad, the Grammy-winning drum icon is seemingly the perfect choice to lead off a lineup of separately ticketed Eastman Theater shows, with Patti LaBelle on Saturday, Marc Cohn & the Blind Boys of Alabama on Tuesday, Jeff Goldblum & the Mildred Snitzer Orchestra on Wednesday, George Benson on Thursday and The Steve Miller Band with Marty Stuart & His Fabulous Superlatives on June 28.

Goldblum is not the only actor turning loose his musical muse at the festival. Dan Aykroyd, a Blues Brother and longtime fan of the genre, joins the Downchild Blues Band, celebrating its 50th anniversary this year, for a few numbers Friday night on the East Avenue and Chestnut Street Stage. These free shows on the closed-off East Avenue generally draw the huge crowds that have become a signature of the festival. Southside Johnny and the Asbury Jukes play that stage Saturday; John Lyon, a tremendous rock and soul vocalist, is a longtime member of the Bruce Springsteen Jersey circle.

Free shows are also set for all nine nights on Gibbs Street, renamed Jazz Street and closed to traffic. The Fusion Stage will be set up in the parking lot adjoining the RG&E building at East Avenue and Chestnut Street. The Central Library will once again present free noontime shows, and the after-hours jam session is back at the Hyatt Regency Rochester, hosted by Bob Sneider and Karl Stabnau.

After topping 200,000 people in attendance last year, it takes Nugent months to sort through the musicians who want to play the festival. “I’d guess 2,500, maybe 3,000 separate applications,” he says. “I’m getting 20 or 30 a day by the end of August. By December, it’s double that, because everyone’s got an agent working for them.”

A free shuttle, running from 3 p.m. to midnight, connects the 20 stages. The Lutheran Church of the Reformation’s always intriguing “Nordic Now” series – with bands such as Girls In Airports, actually five guys from Denmark – has expanded its boundaries to “Nordic & Euro Jazz Now,” and the Austrian trio DH’s Random/Control.

Geva Theatre Center is also new to the fest, with two stages. The smaller Fielding Stage is home to a lineup of Americana bands, while the larger Wilson Stage presents a wide spectrum of sound from percussionist Cyro Baptista to the sublime folk band Over the Rhine to VickiKristinaBarcelona — the trio of women who perform Tom Waits songs and who were a hit at last year’s fest and at a show this past January at The Little Theatre.

Through its first 17 years, the festival has established its own set of fan favorites. Trombone Shorty is one — his participation now seems almost mandatory. Catherine Russell, who was a virtual unknown when she first played here, caught fire immediately with her Ella Fitzgerald-style vocals. She returns next Friday, June 28 at the Temple Building Theater. Jake Shimabukuro’s ukulele vaulted him from The Montage Music Hall to the Eastman Theatre. This year, he plays Geva Theatre’s Wilson Stage on opening night and Kilbourn Hall the following night. It’s serendipity, Nugent says. “I’m not a star maker. I never have been, I don’t aspire to be one.”

Celebrations of jazz tradition run heavy this year. The Scottish National Jazz Orchestra is joined by Rochester’s Bill Dobbins on piano for a celebration of Art Blakey Saturday at The Montage Music Hall. What would have been Nat King Cole’s 100th birthday is noted by singer Paul Marinaro Tuesday at Kilbourn, while “Jubilation!” Friday at Kilbourn is a tribute to Cannonball Adderley on what would have been his 90th birthday. George Benson will undoubtedly reel back the years at his Eastman Theatre show as well; his new album is “Walking to New Orleans: Remembering Chuck Berry and Fats Domino.”

Nugent’s tenor sax always accompanies him to the fest. He plays the nighty jam session, and anticipates perhaps joining bands such as Soul Stew and Djabe. “I have friends, Tommy Smith of the Scottish National Orchestra. The Scottish government is flying them to the United States for three shows. Two in Lincoln Center in New York City. That’s their entire budget. When you fly 20 people into Rochester, it costs. That’s a number with a bunch of zeros at the end of it.”

Ultimately, the fest is Nugent’s playhouse. “I only book artists who I really enjoy and who I feel I can play with,” he says. “Every single band I feel comfortable to jump onstage with.”

To cut down on the time patrons spend standing in line, the fest will continue issuing wrist bands for admittance in the hours before the first set of shows at Max of Eastman Place, Kilbourn Hall and Geva Theatre Center. Club Passes will be shareable this year. That brought a round of applause at Tuesday’s lineup announcement, as the fest’s previous attempts to keep passes non-transferable proved unpopular. The nine-day pass costs $254, plus a $6 service charge. The three-day pass costs $194, plus a $6 service charge. Tickets for Club Passes and the Kodak Hall at Eastman Theatre shows are on sale at rochesterjazz.com and (585) 454-2060.

Most of the Club Pass venues are familiar from years past, including Max of Eastman Place, Montage Music Hall, The Big Tent and The Wilder Room. Christ Church once again offers the “Made in the UK” series; a highlight of those shows could be Kit Downes playing the church’s incredible Craighead-Saunders pipe organ.

The complete lineup is available at rochesterjazz.com.

The Steve Gadd Band at Kodak Hall at Eastman Theatre and the free show featuring Downchild Blues Band with guest Dan Aykroyd will draw much of the attention. But opening night is packed.

Jake Shimabukuro, 5:30 and 7:30 p.m., Geva Theatre Center, Wilson Stage. Get there early, or get shut out. The ukulele star takes the instrument to unusual places.

Emilie-Claire Barlow, 6 and 9 p.m., Kilbourn Hall. The smooth Canadian singer was an absolute delight when she played the fest a few years ago, including a fun take on Sonny and Cher’s “The Beat Goes On.”

Western Centuries, 6:30 and 8:30 p.m., Geva Theatre Center, Fielding Stage. A cowboy supergroup; two of the lead singer-songwriters are from Seattle and the third, Jim Miller, is known for his work with regional favorite Donna the Buffalo.

Jeff Spevak, a cultural arts contributor to WXXI, is a Rochester-based writer. His website is jeffspevak.com.