What about the survivors? 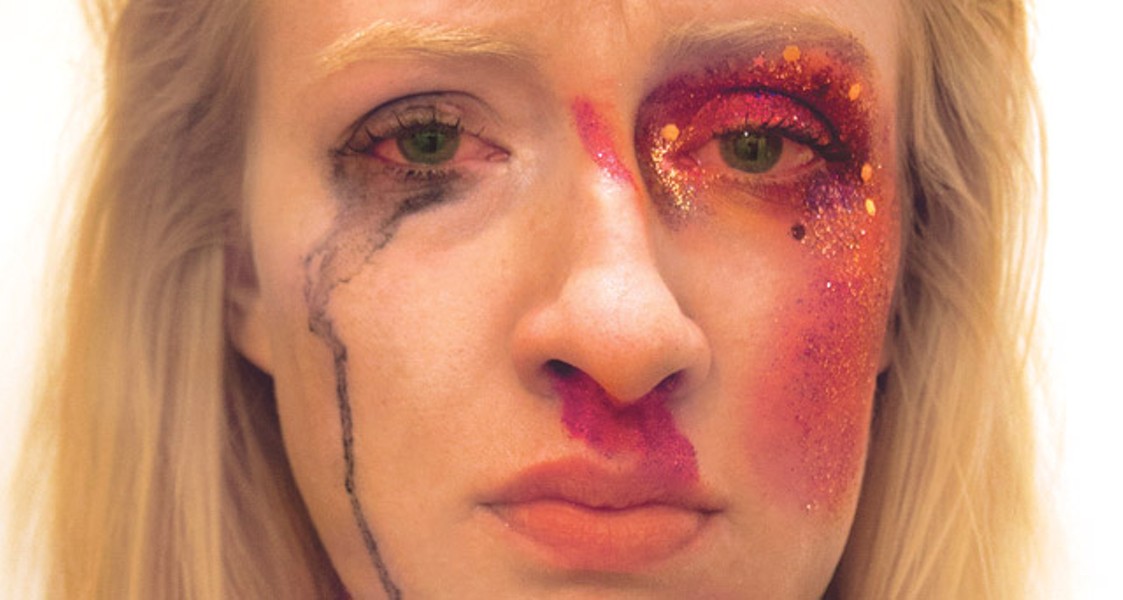 Disclaimer: This issue's cover image of artist Tina Starr's simulated abuse photo is meant to be in-your-face jarring. We know that it will be a triggering image for many, but we decided to run it on the cover in order to confront the issues of violence that Starr feels need to be openly and honestly discussed and not hidden away. Starr's solo exhibit, "Like a Kiss," which is on view at AXOM this month, is presented with the aim of reaching "others who have experienced these things and to disturb those who still are not convinced that this is a real problem," she says.

To call Tina Starr outgoing is a severe understatement. She's charming and loving and audacious, but like a lot of women, has been carrying an under-discussed trauma. Her exhibit of photography, video, and sculpture aims to start and sustain an important discussion.

Starr drew the show's title from the 1963 song "He Hit Me (And It Felt Like a Kiss)," which was written by Gerry Goffin and Carole King for The Crystals. It was inspired by Goffin and King's babysitter brushing off being battered by her boyfriend. "And interestingly, the song was produced by Phil Spector," Starr says. "So all of this is what makes it a really sick, twisted song."

The song has been covered multiple times, including by the band Hole as the B-side of its "Softer, Softest" single in 1994, and Lana Del Rey references it in her album "Ultraviolence" — which has a domestic violence theme and came out in 2014, the same year that Starr excavated herself from an eight-year, manifoldly abusive relationship.

The show's title also serves up some wordplay: much of the exhibit's contents are photographs of Starr's lips made up in a variety of colors and designs. Starr, the woman, is almost synonymous with lipstick — in the past she even had a sponsorship from makeup company Lime Crime — but she says she stopped wearing it for a while at the behest of her ex. Toward the end of the relationship, she began painting her lips again to make exploratory art and as an act of self-validation and defiance.

Rows of these larger-than-life images line some of the gallery's walls; along another wall are three video monitors that display different performance pieces. In one of the videos, a 2013 piece called "Seen & Heard" that she created as part of her graduate thesis, Starr paints ruby lipstick over her mouth, which she has sealed with liquid latex, and then begins to work at opening her mouth by stretching her jaw. Her expressions cycle through confusion and fear and frustration until she eventually breaks the seal — a crystal clear metaphor for what she was experiencing — concluding with a self-possessed expression and cocked eyebrow.

"What I was doing was all about performance," Starr says of her graduate work. "And here I was, going through this abusive relationship, and I was performing to everyone."

Starr is originally from Chippewa Falls, Wisconsin, and relocated to Rochester in 2011 to attend graduate school at RIT. Her ex came along and ramped up his abuse as she began to show signs of a stronger sense of self, which she credits to creating her art as well as the gender studies program she was enrolled in.

The bulk of the art in this show — which she says is a culmination of work from the past six and a half years — was created in the last nine months of the relationship, Starr says. "It became a way for me to always keep busy and stay away from him. I was making stuff, but I wasn't fully acknowledging what I was making."

Starr created the bare-faced self-portrait, "He Hit Me," in 2011. In the months leading up to the exhibit she made its accompaniment portrait, "Like a Kiss," using makeup — a tool many women use to hide evidence of abuse — to simulate bruises, abrasions, and running mascara. "I thought of it like a face map, like a combination of all the hidden things that happened to my face," she says. "I got slapped in the face so many times."

In the first image her eyes are cast downward in despondency; in the second she's confronting the camera dead-on, and the viewer's eye is raked over the makeup, drawn in and held by the extra element of shimmering glitter. The work powerfully sums up her point: What if we didn't look away from the issue of abuse?

The two portraits are displayed together, and on a low pedestal between them is an installation of lipsticks that Starr carved using cuticle tools to look like dicks. The show, Starr says, is in part a response to the media's focus on abusers.

"I couldn't stand seeing it anymore," she says. "Here we are, hearing all about these abusers and what they're doing — what about the survivors? How can we survive this? How can I tell my story so that somebody else can be okay to tell their story?"

During opening reception, held January 26, Starr gave a wrenching live performance titled "Phantoms" during which she sat in a corner of the space and recounted her experiences of abuse and of getting out of the relationship.

The performance felt like a vital self-exorcism, a thwarting of possession. Starr recounted her ex's various shades of control tactics: gaslighting, destroying her self-regard, isolation, manipulation, and physical abuse. Her storytelling was interrupted several times by long, wrenching breakdowns, during which she lay curled up on the ground and shaking with hard, choking sobs. She used a scarf to simulate being choked while telling the audience about his attempt to kill her.

The real subject of the piece is pain. It's residual trauma. It's the need to declare it openly, and the starts and stops involved in healing. "I didn't want it to be about him," Starr says. "I wanted it to be about the emotional experience that I went through, that so many others are going through."

In truth, it feels off to call the work a performance, because the emotional eruptions were authentic. She says she felt lighter afterward, and since the night of the reception several people have approached her and told her about their own trauma.

"One of my favorite quotes is: 'Art should comfort the disturbed, and disturb the comfortable.' There were two kinds of people in the room that night. Those who connected with it because of their own experiences, and those who had to sit and question what they've done. And that's how I have to go forward, because we're not going to see change unless we talk about it."

Starr says after she forced her ex to buy a plane ticket back to Wisconsin (when he wouldn't leave, she called his father), she spent some time at a loss, making her lip portraits but not focusing fully on her art. Three years ago she participated in the artist residency at The Yards, and found a community through the local feminist art coalition Politits.

In 2017 The Yards hosted "Pretty Anonymous," a collaborative show between Starr and fellow Politits artist Jacquelyn O'Brien that included O'Brien's mixed media sculptures and fiber art and a performance by Starr. Nearly nude except for undergarments made by O'Brien, sky-high heels, and a fuckton of glitter, Starr strutted around the space engaging audience members with questions and statements about gender and justice.

Titled "Look But Don't Touch," the work was about ownership of the body and controlling how others engage with it. It was about consent. Starr is known for coating herself in glitter on the reg, which she describes as a tactic: "People say: 'Glitter is the herpes of the art world,'" she says with an eyeroll. "I wear glitter because people hate it. And it is a way to get people to not touch me. But if I'm friends with somebody and I'm wearing it on my cheekbones, I'll like, rub it on 'em like I'm a cat marking someone."

She says that the performance backfired in some ways: "A certain type of guy looked at it a certain way, and more harassment resulted."

Starr was drugged and raped late last year at a karaoke bar, and says she believes that she was targeted by someone who knew she frequented the joint from social media posts made by herself and friends.

The accumulation of her abusive relationship and being harassed and raped and the #MeToo movement crystallized her past work. "I was thinking about everything that happened to me," she says, "what all women are experiencing, and that it's finally getting said. And I'm like, 'OK, I need to do this.'"

Starr promptly dipped from the social scene and began focusing in earnest on planning this show. "I spent November, December, and January really like pulling away from my friends, being alone a lot, and re-examining everything," she says. "Going back and having to think about these events in my life. And basically working as my own therapist through this all."

She recently returned to the karaoke bar to film another of the exhibit's videos, in which she defiantly belts the lyrics of Nirvana's "Rape Me."

Hashtag from Tina Starr on Vimeo.

Starr plans to bring the exhibit and performance to other spaces in different cities. "I want to do this for as many people as possible, because I survived," she says. "I am better. I am emotional. I feel. And I'm intense. But that's me, and that's wonderful. And I see it now."