PHOTO BY RACHEL MCKIBBENS The line at an East End bar on March 14, 2020, after Monroe County had declared a state of emergency over the coronavirus and federal and state officials urged people to practice social distancing.
It shouldn’t have taken a death and an order from the governor to close pretty much everything for our community to start respecting coronavirus for the pandemic it is. But that seems to be the case.

Until now, too many people refused to let the threat of the virus and the disease it causes, COVID-19, disrupt their lives in any significant way. Some holdouts are still resisting.

Sure, there was the panic buying and work-from-home arrangements and school closures. But many people, particularly young adults, appeared unfazed by the crisis.

Take the scene in Rochester’s East End on Saturday night. It looked like any other post-St. Patrick’s Day Parade celebration. There were lines out the doors of bars, vomit on the sidewalk.

One watering hole, Salinger’s on East Avenue, posted an enticement on Instagram: “Don’t be scared. Beer & shots are the vaccine . . . #fuckthecoronavirus.” 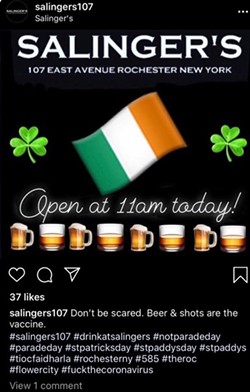 Although Monroe County had canceled the parade to keep an expected 100,000 revelers at bay amid mounting evidence that the virus had arrived, thousands of people defied the advice of health experts to stay home and partied anyway.

They snaked around each other in crowded barrooms and swapped money, phone numbers, spit, and sweat. The East End could have been a petri dish incubating the pathogen. The virus is spreading faster than anyone can track or test.

Earlier that day, county health officials announced a second confirmed a case here in a woman who works at Greece Arcadia Middle School. The next day, officials had confirmed 10 cases, including four they said were “clearly connected” to the woman. Investigators are looking for anyone who may have come in contact with those people.

By Tuesday, the total cases had risen to 14 and one of those patients died. At this rate, there will be 30 cases by the end of the week.

The closure of restaurants, bars, gyms, and theaters indefinitely has forced us to socially distance ourselves from each other, finally, which is the responsible thing to do.

Social distancing and self-isolation are not irrational responses. They are not about panicking. They are about being prudent. There are also about protecting yourself and others around you.

The incubation period for COVID-19 is two to 14 days. That means some number of people are likely infected right now and don’t know it. If they’re living as though it were business as usual, they’re probably infecting other people.

The consequences are dire. Look at what’s going on in Italy, a country that is thought to be ahead of the United States by a week or two in its outbreak and where the first case in Monroe County originated. The healthcare system there is collapsing.

Roughly 3.9 percent of people who have tested positive for coronavirus worldwide are dead (7,527 deaths among 190,836 confirmed cases as of this writing). By contrast, the Centers for Disease Control and Prevention reports the typical mortality rate from flu is about 0.1 percent.

Of course, as The Lancet medical journal noted, those coronavirus deaths are not representative of the actual mortality rate because they are relative to the number of confirmed cases of the infection. There are untold numbers of carriers of the disease who have not been tested, which would lower the death rate substantially.

Business as usual at the Irish pubs in a county that just declared a state of emergency. Anyone partying on East Avenue, stay the fuck away from my bar. pic.twitter.com/VyuC5HftVW


The New York Times reported that CDC officials and epidemic experts from around the world conferred last month about what might happen if the coronavirus gained a foothold in the United States and nothing was done to slow transmission.

But those are worst-case scenarios mitigated by the fact that some cities, states, businesses, and individuals are finally acting responsibly. Those actions include testing for the virus, tracing contacts, working from home, and social distancing.

The big question is whether Americans have the stamina to keep it up. We’re a people quick to become distracted, easily bored, and innately skeptical.

We had better be prepared to stay vigilant, though, because everything points to us being on the first rung of the curve of this epidemic.

How high that roller coaster climbs is up to us. We must look out for each other for however long it takes.

“Many of us were too selfish to change our behavior,” an Italian journalist wrote in a column in The Boston Globe last week. “Now we’re in lockdown and people are dying needlessly.”

Humans are a resilient species. We have survived war, famine, tragedy, and other epidemics. We will get through this, too, as long as we realize we’re in it together, and act like it.