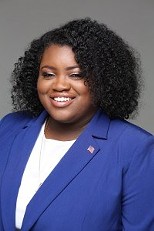 Brittaney Wells will serve as the new chair of the Monroe County Democratic Committee, starting today.

Wells has been the the committee's executive director since early August and was also its executive vice chair. She was elected to a two-year term as chair by county Democratic Committee members during the party's organizational meeting last night.

Jamie Romeo served as the party's chair for the past three years, prior to last night. She won a Democratic primary for an Assembly seat and is running uncontested in the general election; she did not run for reelection as chair last night.

Wells was Mayor Lovely Warren's campaign manager for her 2017 primary and general election bids. Until she started at Democratic HQ, Wells served as director of the City of Rochester's Office of Community Wealth Building.