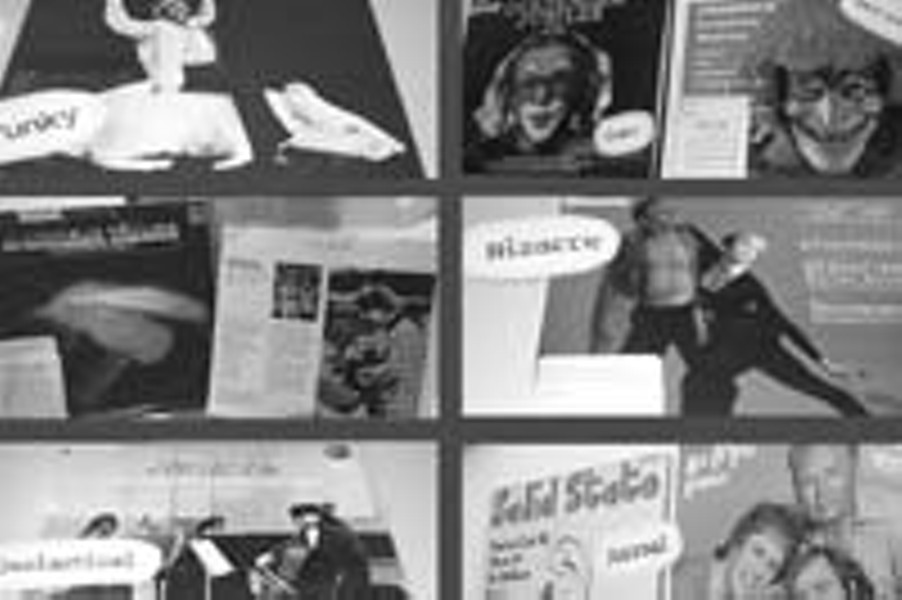 The word "librarian" may not conjure up the image of a guy laughing over a stack of records. But Gerry Szymanski is no ordinary librarian.

"It seems that pop music covers are the ones that are the goofiest," says Szymanski, circulation services librarian at the Eastman School's Sibley Music Library.

He's working on his latest album collage for the Reserves and Recordings Desk. This one is titled "Love (and more?) is in the air," and features record covers intended to appeal to the listener's libido. Candidates weren't too hard to find among the library's 55,000 LPs. "It's like having the biggest record collection on earth," Szymanski says.

Szymanski began to dress up his third-floor workspace soon after he began working at the library. His first muse was Austin Powers. A lone cutout of Powers was the humble beginning of "As Weird As It Gets," the umbrella title Szymanski uses for all of his displays.

On his website, Szymanski explains he looks for record covers that "boggle the mind, provoking questions like 'Why?' 'Who did they expect would buy this?' 'WHAT WERE THEY THINKING?'"

Szymanski's site has pictures from his earlier displays. One LP, called The Doldinger Jubilee and labeled "scary" by Szymanski, has on its cover a clown with glasses and stringy brown hair. Szymanski's caption reads "Scary: clowns of any sort, but especially musical, German, jazz clowns." The music is German jazz-fusion, recorded in 1975.

Szymanski labeled another album called Solid State "surreal." On the cover is a girl leaning into a large ear. "Can you hear me, giant white ear?" his caption reads. "Can you hear my orange and green 'solid state' shout?"

"It gives people something to do while we're searching for their recordings," Szymanski says, grinning.

The Sibley Music Library is located at 27 Gibbs Street. Info: 274-1300. Szymanski's displays, and much more, are archived on his website, www.frontiernet.net/~gerry.

They were lowering the flags outside the county office building to half-mast yesterday, in honor of former County Legislator Dennis Pelletier.

Pelletier, 54, died suddenly Monday afternoon. He was speaking at the New York State Association of Counties legislative conference in Albany at the time of his collapse.

"On behalf of the legislature, I just want to express my condolences to his wife and family," says Legislator Wayne Zyra, who succeeded Pelletier as president of the Monroe County Legislature this year. "This is a terrible loss for them and the legislature. He was a very good friend."

Pelletier joined the legislature in 1993 and was elected to serve as the body's president in 1998.

Prior to his county service, Pelletier served on the Ogden Town Board for five years. He was also on the Ogden Zoning Board of Appeals and the Ogden Board of Ethics.

He was active in the community as a member of the Spencerport Area Chamber of Commerce Board of Directors and was a founding member of the chamber's Youth Hall of Fame Awards.

Pelletier had recently resigned from the legislature to become executive director of the Monroe County Water Authority.

"It is the duty of the owner and the occupant of the ground floor of any structure thereon to remove and clean away all snow, ice, and other refuse or obstructions from said sidewalk," says the Rochester City Code.

But too many residents, businesses, and organizations translate the legalese into something like this: "It's our privilege to depend entirely on the sidewalk plow, then watch passively as pedestrians, wheelchair users, baby-carriage pushers and others who refuse to be good car-operating Americans struggle through the slush or take their chances in the street."

Hopefully things won't go as they have in the Buffalo area. Three years ago, four Amherst teenagers were forced out onto a busy thoroughfare because a sidewalk wasn't cleared. A car struck them; three of the four were killed. Now Amherst officials are more careful about enforcement, according to a recent Buffalo News report.

Tragedy may not have struck here (yet), but routine problems make it hard for some people to get around, and impossible for others.

Reader Anita Mitchell, a Mt. Hope area resident, called to complain about unshoveled sidewalks and bus stops along the Mt. Hope route. "I ride the bus most every day but Sunday," she says. "I can tell you none of the bus stops are cleaned out." She tells of calling City Hall and the bus company and getting nowhere.

We retraced Mitchell's steps --- the phone protocols, that is. A person at the City's Office of Customer Satisfaction, which is the designated place for fielding such calls, told us we'd have to contact the particular NET office. There we finally got some answers.

Area D NET administrator Peter Saxe confirmed that "our sidewalk plows supplement what residents have to do." He said city staffers are caught in "a vicious cycle" right now, with heavy snowfalls and many trouble spots to take care of. "We do put special attention," he says, "on [bus] stops near places where many disabled people live." He promised to personally check out the Mt. Hope spots and follow up, as necessary.

Chili Supervisor Tracy Logel's secretary has quit, leveling charges of petty politics and unprofessional behavior at members of the town board.

The secretary switch is the latest in a series of controversies that have set Logel at odds with the town board. Board members rejected Logel's choice for town finance director and have faced serious consequences for that action. Councilwoman Mary Sperr was replaced as head of the Chili Republican Party, and the promise of a county job to former supervisor Steve Hendershott disappeared.

Logel has also sought the advice of police over alleged missing and deleted files at town hall.

Board members and Hendershott deny anything is missing.

"I don't find [it] to be a problem," Sperr says. "I find that the secretary's well compensated."

All town employees start at entry-level pay, or close to it, Sperr says. For the secretary's position, that amount is $33,000 annually.

The pay dispute is one of the reasons Pascale-Holmes resigned. She also accused board members of petty politics, such as disputing the accuracy of meeting agendas.

Councilwoman Ginny Ignatowski says Pascale-Holmes' charges are an "outright lie" and that she was always pleasant with the secretary.

"I guess I have to get used to being lied about," she says. "I never said anything derogatory. I don't know where that came from."

The Latino Alliance's second Political Campaign Academy gets underway March 1. The alliance hopes to engage Latinos of all political parties who are interested in exploring elected office or working on political campaigns.

Graduates of the first academy --- which ended last June --- have gone on to join political committees, to work on campaigns, or to become civilly active in some other way. Graduates Ivan Ramos and Ivonne Martinez ran unsuccessful races for city school board. Graduate David Perez won a spot on the board.

Prior to the academy, 95 percent of the participants had never been a candidate for public office.

"This is absolutely a historical effort," said Democratic county legislator José Cruz at a press conference last week. There has even been interest in the academy, he said, from outside the Rochester area --- as far away as the West Coast.

The curriculum consists of six sessions, ranging from "Getting Started: Why People Run for Office & Campaign Planning" to "Town and Village Governments."

"The curriculum is excellent," said state Sen. Joe Robach at the press conference, adding that the sessions take participants through the political process from voting to potentially being a candidate.

In a democracy, Robach said, "You can't complain unless you're trying to make a difference."