This is for kids. We think. Science experiments that involve painting with fizzy bubbles, rockets powered by pressure and mud slinging in general. Dress for mess. MESStival runs through Friday. 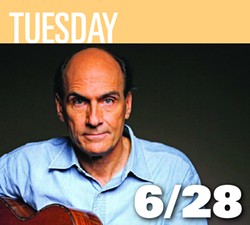 Taylor is the prototype sensitive singer-songwriter. You know the introspection of “Fire and Rain” and “Sweet Baby James. Irondequoit native Steve Gadd is behind the drums. There’s no opening act, so don’t be late.

On this evening, the café’s music features this local guitar duo. But look at the walls as well. This month’s art exhibit is “Hanging By a Thread,” fabric constructions by Jeanne Simpson.

Genesee Johnny leads an evening of blues the last Thursday every month. Mike Munson joins in this week. The music of Son House, a Rochester blues icon, is of course a big part of the proceedings.

The songs are classics, the dances are new. This show, dedicated to the era of Motown and the people who lived it, will be the debut outing for Nazareth alum and dancer Amya Brice’s new dance company and school, Grassroots Dance Exploration. She started this new company and school with a focus on inclusion, highlighting improvisation and the cultural connections between dance and the individual. Shows for Hitsville, 1959 run through July 3, starting at 7:30 p.m. on Friday and Saturday, and 2 p.m. on Sunday. Tickets are $10, $7 for students and seniors.

What could go wrong in a theme park filled with meat-eating dinosaurs? The RPO performs John Williams’ score for Steven Spielberg’s Jurassic Park while the film plays on the big screen in high-definition.

For someone who gets around primarily by bike or bus, Sodus Bay is a bit of a haul, so I have yet to make it to see this lighthouse and experience this bay about which I’ve heard so much. But this is the year I’m going to get out there and add this to my list of Rochester-area explorations — with the added joy of some live music. There are free, live concerts every Sunday afternoon from 2-4 p.m. through Labor Day weekend, and jazz pianist Gap Mangione kicks things off with his big band on the holiday weekend.