We don’t need a park on the Midtown site

July 19, 2016
I hate to throw cold water on the enthusiasm about making part of the Midtown site into a public park, but seriously, folks: No.

I know, I know, it was a wonderful scene: thousands of people gathered on Midtown’s Parcel 5 to hear Trombone Shorty the last night of the Jazz Festival. It was great fun. And it was indeed wonderful to see that many people downtown, having a good time, together. 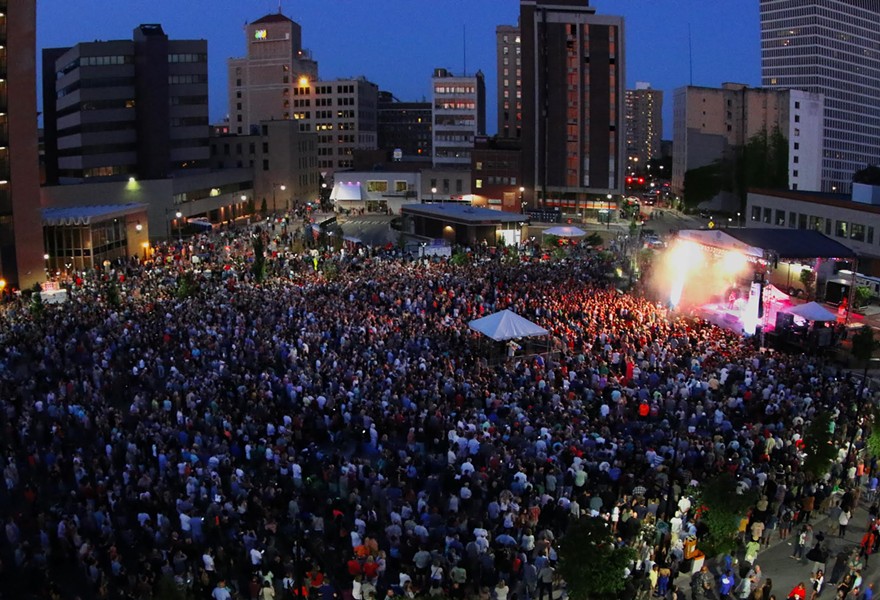 But thousands of people crowd downtown at various outdoor stages at every Jazz Festival. Parcel 5 is a prime development site. Developers’ interest in downtown is much stronger now than it was when Midtown Plaza was dying and city officials were talking about things like a Little Italy food and retail complex. Tower 280, Legacy Tower, The Metropolitan, One East Avenue, 50 Chestnut, 88 Elm, 111 East Avenue, the Sibley Building, The Hive, Charlotte Square: One after another, these things have been springing up and spurring more development.

Parcel 5 is only part of the Midtown development site, and this enormous area won’t be filled overnight. Whatever we put there should be the best use of that very valuable property. And a park ain’t it. Let me count the reasons:

1) A park won’t pay taxes. This city needs money to pay for schools and police and trash pick-up – and for things like the Jazz Festival, which staged the Trombone Shorty concert. A lot of that money comes from city property taxes. Parcel 5’s use should pay taxes or spur nearby businesses that will.

2) A public gathering space featuring concerts with loud music won’t be compatible with its neighbors. Several of the residential developments under way right now border Parcel 5. These will have lots and lots of apartments. Whose occupants might want things a little quieter at night.

Healthy, dynamic cities thrive on the co-existence of a wild variety of uses, but Rochester’s downtown is not yet healthy and dynamic. And even if it were, we would want to plan prudently, not deliberately create conflicts. Putting an outdoor concert space smack in the middle of a group of apartment buildings is poor planning.

3) Parcel 5 as a park, however beautifully designed and landscaped it might be, would be used for big events only a few times a year. Given our climate, it would be empty much of the time. We need uses that put people downtown year-round, day and night. Offices, corporate headquarters, retail, restaurants, entertainment complexes, residential buildings do that.

4) We already have parks downtown – just a few blocks away. Among them: to the south is Martin Luther King Park, with a built-in concert section. Crossroads Park and Charles Carroll Park stretch out along the river north of Main. All three were intended to add green space to downtown and serve as public gathering spaces. They’re ideal for seasonal uses for concerts, holiday markets, that kind of thing. And there are numerous smaller parks throughout downtown.

Parcel 5 occupies a key location on Main Street, downtown’s principal street. The city is accepting development proposals for the parcel right now, and I assume one will be for a new theater for the Rochester Broadway Theatre League. RBTL has wanted a downtown site for years – and earlier this week, city officials released a study of the costs and potential for a large theater on Parcel 5.

Maybe a theater is the best use; maybe the best use won’t present itself for several years, after the new residential buildings fill up and other development follows. Meantime, yes, we can clean up Parcel 5 and use it, temporarily, for concerts. But it’s a valuable development site, and we shouldn’t close out that option with a park that we simply don’t need.