‘Water is Life’ mural by Seneca artist installed on the Genesee 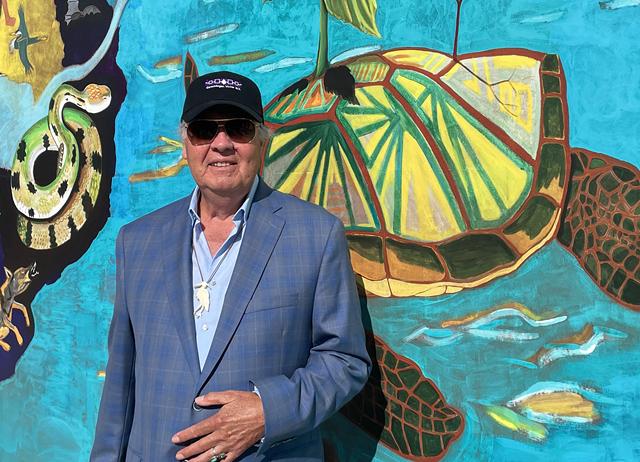 In the Haudenosaunee creation story, Sky Woman, the daughter of the Great Spirit, descends from the heavens toward a watery world whose animals, fearing for her safety, dredge mud from the bottom of the sea to make the earth grow on the back of a giant turtle.

That story has been depicted on a new mural that was unveiled Tuesday in downtown Rochester at the edge of the Genesee River.

Artist Peter Jemison, manager of the Ganondagan State Historic Site, painted the work, titled “Water is Life.” A weatherproof reproduction was installed on the side of the Floreano Convention Center in cooperation with the city.

Jemison is a member of the Seneca Nation, which is part of the Haudenosaunee Confederacy (also known as the Iroquois — a name given to them by French colonists).

“To me this was the ideal location for the mural,” Jemison said during the unveiling.

“I feel a very strong connection to the Genesee River because our people — my people, the Seneca people — lived on the river here, all the way down as far as Letchworth State Park,” he said.

Mayor Lovely Warren led the unveiling, and commented on the Haudenosaunee people’s powerful relationship to the natural world as well as the city’s investment in remaking the riverfront, which has been a centerpiece of her administration.

“Today we honor that relationship, not only by this mural, but by reinvesting in and reimagining our relationship with the water that runs through our city,” Warren said.

Jemison, whose artwork is currently on exhibit at the Memorial Art Gallery through Nov. 7, also oversaw the addition of the Seneca Art & Cultural Center at Ganondagan State Historic Site in 2014. The SACC functions as a museum to the Seneca’s history in this region, a fine arts gallery, and a performing arts center.

A plaque with the title, names of contributing artists, and the creation story is installed next to the mural.

The installation of “Water is Life” marks what Jemison called a start to educating the wider public about the history of this land and its original inhabitants.

“My ambition was to put something here that would acknowledge the original people that occupied this land,” he said. “And this really solves that, just as a good representation of a story of ours, the creation story, an elegant story that figures into our cosmology. I think it will help raise consciousness.”

The unveiling came ahead of Indigenous People’s Day, Oct. 11, which the city formally recognized as the alternative to Columbus Day in 2018.