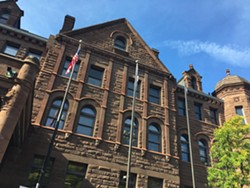 It’s the next step in what he described in September as a months-long look into who knew what and when about the Daniel Prude case. Prude suffocated in Rochester Police custody in March. He died a week later.

City Council empowered Celli and his New York based law firm Emery Celli Brinckerhoff Abady Ward & Maazel LLP to conduct an independent investigation into the matter last month. Celli is also leading Council's legal fight about Rochester’s Police Accountability Board. Council’s appeal in that case was filed in the summer.

Warren, Singletary, Lupien, Curtin, Roj, Yudelson, and Prince are all expected to testify under oath to the independent investigation committee in the coming weeks.

Celli’s subpoenas are asking for emails, text messages, phone records, recordings and other documents related to the Prude case. The request includes keywords like PCP, spit, homicide, Jefferson Avenue, the names of the officers involved in the case, as well as Prude’s family’s attorney among other requests.

Just a few hours after Celli’s office sent the subpoenas, the mayor’s office and the city’s law department announced the appointment of Carrie Cohen of the law firm Morrison & Foerster as an independent special council. They say her role is to help facilitate Celli’s investigation.

A joint statement from the City Law office and the Mayor’s office called Cohen “an extremely well regarded attorney and federal and state prosecutor” that will “help build greater confidence and trust in our City’s government and help us through the healing process.”

Celli told the media last month that he expects this investigation to take at least three months.


James Brown is a reporter for WXXI News, a media partner of CITY. He can be reached at jbrown@wxxi.org.