May 15, 2020
Before COVID-19, city of Rochester officials faced a projected $40.4 million gap as they began preparing the 2020-21 budget. By the time Mayor Lovely Warren released her proposed plan Friday, the figure had grown to $64.4 million.

The disparity was fueled by the same factors that are busting budgets across New York. The “public health crisis that has become a fiscal crisis,” as Warren framed it, has choked off billions of dollars in revenue to the state and to municipal governments. 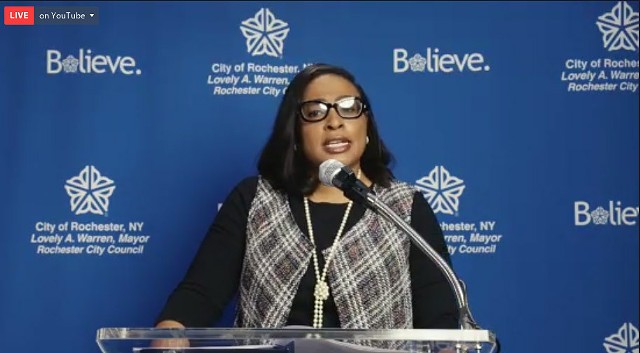 Municipal budgets rarely decrease year over year. But Warren’s proposed plan calls for what amounts to a $22 million cut from the $552 million budget for the current fiscal year, which ends June 30.

As the city solicited input on the budget, officials heard from residents that police, fire, refuse, and recreation services were a priority, according to Warren. The budget makes no cuts to those services, and continues funding distributions of meals for children at the city’s R-Centers, she said.

It provides for ROC the Riverway projects that were already under way, such as the ROC City Skatepark, to continue to completion. The budget also includes funding to finish construction of the International Plaza at La Marketa on North Clinton Avenue and a new police station on East Main Street.

Under the mayor’s budget proposal, the city would collect $9 million more in property taxes next fiscal year. The typical homeowner would pay $133.79 more a year while the typical business will pay $243 less. There’s a discrepancy between residential and commercial because growth in home values is outpacing growth in commercial property value, according to city officials.

“This will ensure that our essential services, including our police and fire departments, are unaffected by this crisis,” Warren said.

Chris Wagner, the city’s budget director, said the 2020-21 budget plan would be balanced in part by tapping $14.8 million from the city’s “rainy day” fund. Union concessions on health care costs worth $5 million also helped close the gap, he said..

Warren previously announced that the city would eliminate 17 positions, furlough 178 workers, and transition another 208 employees to a part-time job-share arrangement to save on costs; 213 are in the library system. Those cuts took effect on May 6 .

Those changes, when combined with a freeze on discretionary spending and non-essential hiring, will save the city $16 million, Warren said.

Every government in New York is short on funding right now.

As members of New York lawmakers prepared to pass a 2020-21 budget, Governor Andrew Cuomo projected the state faced a $15 billion gap. The state’s pain has trickled down: the final budget cut aid to local governments and schools and left an opening for further cuts later this year.

County officials have projected that they’re facing a $20 million to $40 million loss in state aid for the county’s 2020 fiscal year — state aid had been budgeted at $195.6 million. County Executive Adam Bello has said that between the potential aid cuts and the loss of other revenues, particular sales tax money, Monroe County faces a projected $68 million to $122 million shortfall this year.

On Tuesday, the state Comptroller’s Office reported that sales tax collections were down more than 24 percent in April, as much of the state remained in a shutdown. Monroe County collected $29.1 million in sales tax revenue, a 25 percent decrease compared to April 2019, when it collected $38.7 million, according to the Comptroller’s Office. The county shares that revenue with the city and with towns, villages, and school districts.

Several times throughout her presentation Friday, Warren called on federal lawmakers to provide direct assistance to cities to help them make up for revenue lost due to the coronavirus pandemic.

Failing to provide direct aid to cities will lead to “future disastrous cuts” and Rochester and in cities across the rest of the country, Warren said.