Warren said the city has expanded its Pathways to Peace anti-violence program so that it operates until 3 a.m. Thursdays through Saturdays, police will step up patrols in areas experiencing increased violence, and that the Roxie Sinkler and Avenue D recreation centers will remain open until midnight on Mondays through Saturdays.

“Simply put, we have to ensure the safety of the community and our residents,” Warren said during a news conference Friday afternoon. “Simply put, there’s no reason to use a gun to end a dispute.” 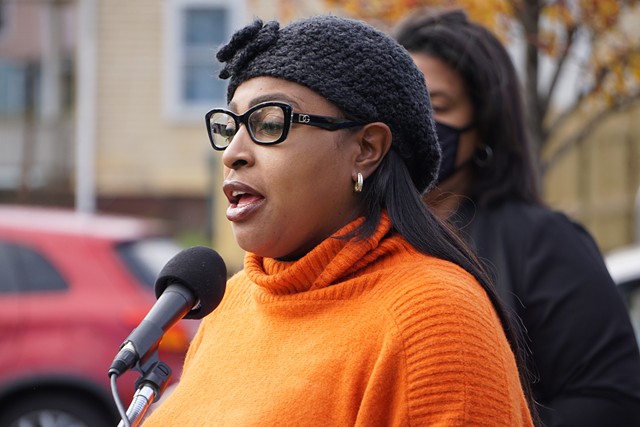 Warren, Police Chief Cynthia Herriott, and City Council Vice President Willie Lightfood said 60 percent of shootings in the city are related to some sort of ongoing dispute. The focus on recreation centers is meant to provide other options for youth.

Rochester is not the only city facing a sharp rise in shootings. Buffalo saw a 102 percent increase over shootings through September, and Syracuse saw a 129 percent increase, according to data from the New York State Gun Involved Violence Elimination (GIVE) Program.

“We’ve certainly spent some time behind the scene trying to figure out the best use of our resources,” Herriott said.

The news conference was derailed halfway through when Justin Morris, a former Pathways to Peace employee now involved in community activism, confronted the mayor and chief at the news conference. Speaking over both of them, Morris stated that he resigned from Pathways last year due to “politicization” of the program. The mayor said he was removed.

“We will never see change in this community if we don’t put the most influential people into these spaces,” Morris said.


“You? Does that mean we need to put you into office?” Lightfoot responded. “You gonna fix it?”

Morris continued on and said Warren’s plan was nothing more than a rehashing of previous mayors’ attempts to curb violence.

“We’re going to do the same thing Bob Duffy did,” Morris said.

Morris said the city has failed to offer truly new initiatives to curb violence. He doesn’t expect to see any change.

During the spat between city officials and Morris, Lightfoot called Morris “a clown.” At another point, city Communications Director Justin Roj told Morris to let the mayor speak. Morris told Roj to “get out of my face.”

The mayor, in telling Roj to step back, remarked, “You know what they say about pigs, they like to get dirty. If you get down with them, you get dirty, too.”