PHOTO BY MAX SCHULTE Mayor Lovely Warren talks about plans to explore the possibility of using projected marijuana tax revenue to pay reparations to the city's Black and brown residents on Friday, March 26, 2021.
Mayor Lovely Warren said Friday that she is launching an effort to explore paying reparations to Black and brown city residents using tax revenues generated through the legal marijuana market.

The mayor said she was eyeing reparations and homeownership initiatives, including what she called a “universal basic income program.” Universal basic income, or UBI, generally involves giving a fixed government subsidy to every adult on a regular basis.

“Beyond changing policies and procedures, we must do more to close the wealth gap between Black and brown people and our white neighbors,” the mayor said. “The impending legalization of marijuana in New York state presents us with a new opportunity to bring real resources to bear to uplift our families and improve, not only their financial well-being, but their very future.”

Speaking at a City Hall news conference, Warren said her exploratory committee would review similar programs in other cities to see how they could be implemented here. She added that the committee will begin meeting next week.

“The people, the neighborhoods, the communities that were most affected by the criminalization of marijuana deserve the opportunity to be the first ones to receive, and also to be invested in, as we start to distribute those dollars,” Warren said.

On Thursday, Gov. Andrew Cuomo and state lawmakers reached a final deal on a bill to legalize marijuana that is widely expected to bring in hundreds of millions of dollars in revenue annually. The final deal includes a 4 percent tax on retail sales that will be returned to local government, though it’s unclear how much in tax revenue the city of Rochester would receive.

In floating her proposal, Warren referenced the recent findings of the city-county Commission on Racial and Structural Equity (RASE) report, which highlighted systemic inequity among the races in the region. Two members of that commission, Special Assistant Public Defender Danielle Ponder and Spiritus Christi Prison Outreach Director Damond Wilson, have called for funding reparations with cannabis revenue. They proposed creating a community chest for Black county residents that provides funding for entrepreneurs, housing, and other needs.

City Council member Malik Evans, who is running against Warren in a Democratic primary, said that a universal basic income would require far more money than the city is going to get from marijuana taxes. Anything the city does with those revenues needs to be well thought out, Evans added, saying that he’d like to see the funding used to encourage entrepreneurship in Black and brown communities that have been harmed most by “draconian” marijuana laws.

“The public is so skeptical of anything that comes out of government right now because they hear these promises and then the things aren’t executed in a way that engenders confidence,” Evans said.

Warren previously announced plans to put $2 million to $5 million of cannabis tax revenue into a pair of initiatives. Her proposed Housing First Trust Fund would provide city residents with home ownership and housing assistance while her proposed Equity and Recovery Agenda Emergency Fund would provide $2,000 microloans for families in need.

She added Friday that the city is working with other partners on the housing fund and emergency assistance efforts, and that for all of these initiatives to be successful a lot of people and organizations “will have to step up.” 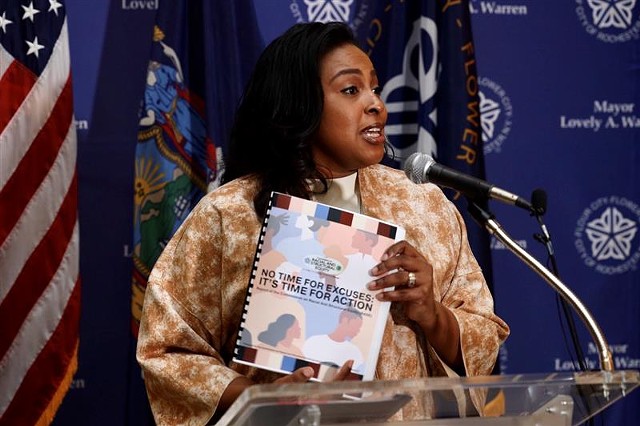 Universal basic income programs usually provide fixed monthly payments from a government to all adults at an amount that covers basic needs. Warren said the committee she’s putting together will examine what a program for Rochester might look like, and at questions such as qualifying income levels or which neighborhoods would be targeted.

The mayor said she is looking at efforts in Oakland, California; Stockton, California; and Evanston, Illinois, to provide potential blueprints. But those cities don’t have universal basic income initiatives, they have set up what’s referred to as guaranteed income programs. Each city targets low income neighborhoods with an emphasis on providing payments to residents who are Black or who are other people of color.

Evanston’s City Council passed a plan Monday that it will distribute $400,000 in increments of up to $25,000 to residents with ties to the city’s Black community that date from between 1919 and 1969. The money can only be used to buy a home, pay a mortgage, or make repairs to a house.

Weed is legal in Illinois and the effort will be funded by a portion of the tax revenue the city receives from sales.

On Tuesday, Oakland officials announced that the city was launching Oakland Resilient Families, which will provide $500 payments for at least 18 months to Black, Indigenous, and other people of color living in the city. The program is open only to families with at least one child under 18 whose incomes are at or below 50 percent of Oakland’s median income. That works to an income of $65,000 for a family of four in 2020, according to the city’s website.

Oakland is following the model in Stockton, where in 2019 then-Mayor Michael Tubbs started the Stockton Economic Empowerment Demonstration. The program, also known as SEED, was donor-funded when it launched and provided 125 people living in neighborhoods where incomes were at or below the city’s $46,000 median income with $500 a month for 24 months, no strings attached.

A study of SEED’s first year that was released earlier this month showed that the largest percentage of those payments were spent on food and that those who received the payments reported greater economic stability and improvements in mental and physical health.

Warren said that she’s seeking to join the organization formed by Tubbs, Mayors for a Guaranteed Income.

The rest of the committee’s makeup has not yet been determined. Warren said she has invited members of City Council to participate as well as organizations including the Urban League, United Way, Rochester-Monroe Anti-Poverty Initiative, Action for a Better Community, Ibero- American Action League, YMCA of Greater Rochester, ESL, the Farash Foundation, Rochester Area Community Foundation, and the Faith Roundtable.

“The legalization of marijuana gives us a unique opportunity to right some wrongs and that’s really the definition of reparations, the making of amends for a wrong that has been done by utilizing resources to otherwise help those that have been affected by government in many cases,” Warren said.