While the winter months brings the chills, these comforting dishes will warm the spirits.

Comfort food means different things to different people, but there are some common denominators: As with my attachment to pizza at The Varsity (which I ate with alarming frequency while attending Syracuse University), there is usually a sentimental or nostalgic element to comfort food. It is often described as hearty or warming, both physiologically and emotionally — especially here in the northern latitudes. And correspondingly, many comfort food dishes are carbohydrate-heavy.

I set out to identify and extol a few Rochester area restaurants' archetypal offerings of comfort food. Due to space constraints, some worthy eateries were excluded, so if your favorite comfort food is not represented here, leave a comment on this article at rochestercitynewspaper.com.

If you're like me and don't have an Italian grandmother to cook up indulgent comfort food, hit up Tony D's on a Sunday for its Sunday Sauce, which curiously is neither listed on their menu nor as an official daily special. I guess word of mouth does the job. The Sunday Sauce — a pork ragù that also incorporates Tony D's light and airy, lacrosse ball-sized meatballs and Italian sausage — is served over al dente rigatoni for a captivating indulgence. With a bright acidic bite and meltingly tender shredded pork, the Sunday Sauce's consistency adheres to every bite of the rigatoni.

Enhance the comfort factor by starting your Sunday supper with an order of Rochester staple Greens and Beans. Tony D's version is a little creamier than most, deftly salted, with garlic prominently infused in the toothsome escarole and firmly tender cannellini beans. The warm, cozy atmosphere and views of the mighty Genesee only accentuate the experience, which tastes like tradition. 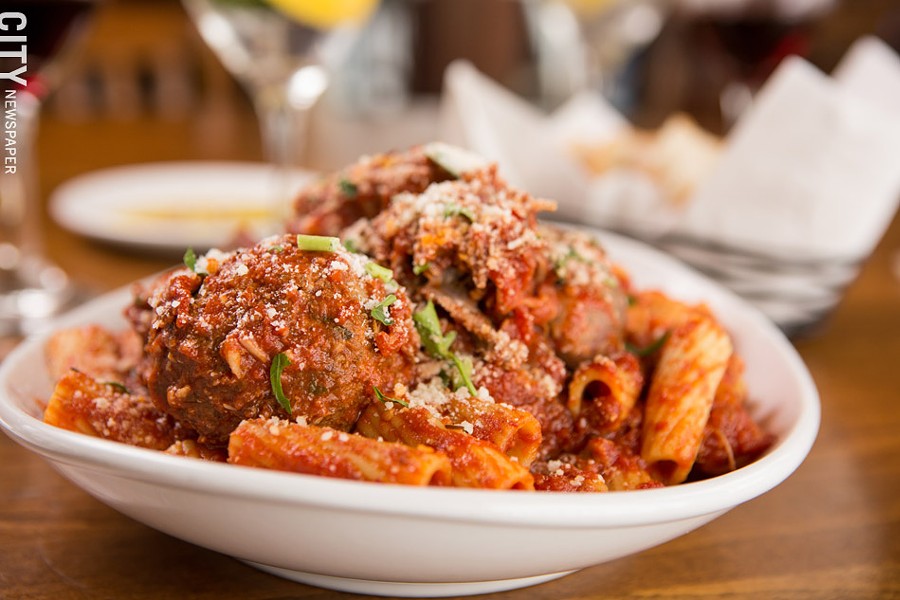 Built in 1861 and owned by the same family since 1920, the American Hotel sits stately at the four corners of Lima and just oozes charm. Just settling into the dining room, one feels a sense of enveloping comfort: from the black-and-white checked linoleum floor to the red punched-tin ceiling to oak woodwork to the doting service. The American Hotel is justifiably known for its over 150 varieties of soups, all concocted by Rose Reynolds — the matron and mastermind of the American Hotel's menu — who has published two cookbooks of her soup recipes. On any given day, you will find about six different soups on the day's menu.

One of the things I like about Reynolds's cooking is the way she transforms dishes not commonly associated with soup, like the cheeseburger chowder (the restaurant's second-most popular choice, behind only split pea) and the clam and linguine soup. The cheeseburger chowder, made simply with cheese, milk, celery, onion, and ground beef is pleasingly lighter than one might expect, with a nice balance between cheese and beef — almost exactly what you'd want or expect from something called cheeseburger chowder.

The clam and linguine soup, with clam broth, garlic, salt, olive oil, and expertly cooked linguine, was silky with a briny authentic clam flavor. To complete the experience, I had a baked ham with cheddar sandwich on a pretzel roll. The American Hotel bakes its own hams (and roasts its own beef) and was serving up soft and dense pretzel rolls long before they came into vogue in our popular culture. Thick with hot, layered, thin-shaved ham, melted cheddar, and pungent spicy mustard, this sandwich further epitomized the comfort to be found at this grand old establishment where every soup satisfies.

Pho is my go-to soothe-my-soul dish during Rochester's cold months, and there are several Vietnamese restaurants in the area that do it right. Pang Zi is a relative newcomer to the ever-expanding pho scene, one I'm glad I discovered rather serendipitously a recent evening in Fairport. Easy to miss (it's set back from the road, inconspicuously next to a laundromat), Pang Zi offers 16 varieties of pho, including a kids' meal. I chose the rare beef version, in which lean, tender beef actually cooks a little bit more in the earthy, beefy, gingery broth that is just brimming with depth and a complexity of flavor.

In addition to the rice noodles, onion, scallions, bean sprouts, Thai basil, and jalapeños that provide a panoply of textures and flavors, I find that a little extra fresh-squeezed lime and a few squirts of Sriracha take the dish to sublime levels. To me, there is no greater comfort than pho, and at just $7.95 for a belly-busting bowl, it feels even more comfortable. Some may do it as well as Pang Zi, but I'm not sure anyone does it better.

Only open during lunch hours, Fox's is as close as you'll get to a New York City deli in Rochester. With a rather staggering menu of comfort-inducing soups and sandwiches, I opted for the Mish Mosh Soup, and what I believe is Rochester's premier Reuben sandwich. Mish Mosh soup starts with a rich, hearty homemade chicken broth, to which Fox's adds fluffy matzo balls, egg noodles, rice, and kreplach, which are small dumplings that Fox's menu describes as "beef-filled Jewish wontons." Warming body and soul, this soup might epitomize comfort food.

As for the Reuben — well, sandwiches don't get much better. Mounds of hot, richly flavorful lean corned beef, Swiss cheese melted not only on top of the corned beef, but also below the top slice and above the top slice of flawlessly toasted rye bread. Thankfully, the sauerkraut at Fox's is not an afterthought. Crispy, sour, and biting, it was the best complement to the rest of the sandwich, which had all its flavors — the corned beef, the Swiss cheese, the sauerkraut, and the bread — in balance, allowing me to taste them all separately as they melded together harmoniously.

Upon entering Thali of India, a perfume of heady soothing aromas greets you: Scents of ginger, cumin, coriander, and ginger mingle, permeating the air with a tantalizing bouquet. To maximize your comfort, however, settle in with an Indian beer and order up some chicken makahni and a side of onion kulcha. Chicken makahni is one of the restaurants most popular entrees, and rightfully so. Personally, no matter the state of my spirits, they are always elevated by chicken makahni. Firm and tender chunks of white-meat chicken are bathed in a creamy, sweet, spicy, and tomatoey yogurt sauce, redolent of ginger, garlic, and cumin.

While there exists an amazing synergy between the chicken makahni and the accompanying nutty basmati rice that cannot and should not be underestimated, true magic occurs when dipping torn-off pieces of the onion kulcha (a form of naan filled with chopped onion, cilantro, homemade masala, and baked to crispy, chewy, charred perfection in a tandoor) in the makahni sauce — an ideal vehicle for delivering more of those intoxicating flavors to palate, heart, and soul. Complete your comforting meal with a bowl of Thali's kheer — a luxurious not-too-sweet Indian version of (basmati) rice pudding.