WANTED: The personal ad that brought them together

by Katherine Stathis and David Andreatta

May 19, 2020
In March of 1983, Jerry Elman placed a personal ad in CITY Newspaper that would change his destiny.

Now, a lifetime later in the midst of a global pandemic, he wanted the ad.

He could recount well the joys it had brought him and how he treasured the response he received. But he could not recall what he wrote. The ad had been lost to time, to romance, to life.

Jerry had to find that ad. He contacted CITY.

Before there was eHarmony and Tinder had singles swiping left and right, the personal ads were where people sought companionship, love, and, as Rupert Holmes immortalized in his 1979 saccharine ditty “Escape,” romantic partners who liked piña coladas and “making love at midnight in the dunes on the cape.”

The amorous ads were a mainstay of newspaper classifieds and popular with readers who, regardless of their relationship status, saw them as windows into the hearts of strangers.

Jerry had opened his heart wide more than once. “People were using CITY kind of like they use online stuff today,” Jerry said. “It was a pretty big deal back then.”

He wrote ads that winter that took him a few minutes apiece to pen and that he recalled sounded like all the others — heavy on poetry and light on plumbing. He had trouble zeroing in on what he wanted, and found the responses he received disappointing.

Then, at some point, he focused. He spent more than an hour finding the words that revealed him. “I remember my thinking was that this may be the last time I try,” he said.

He opened: Single Jewish male, 28, who enjoys life and having fun, but also takes life seriously, is looking for that special female to share life and its pleasures with.

In March of 1983, a woman named Janet Brzowsky picked up an issue of CITY Newspaper that would change her destiny. 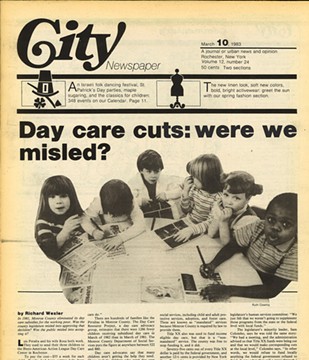 Maybe she read the cover story about cuts to day care funding. Perhaps she spotted the calendar listing for an upcoming show featuring guitarist Kinloch Nelson. She may have noticed the ad for a new Atari 800 selling for $549. She doesn’t remember.

What she definitely read was the personal ads, specifically the one that caught her eye from the single and serious Jewish man who liked having fun.

His ad went on: I am honest, open, fun loving, and loyal. If you are attractive, slim, intelligent, and have similar qualities and want to develop a special relationship write Box 1088, City Newspaper.

“That was the one ad that struck a bell with me and I decided to answer it,” she said. “It was pretty straight-forward. He sounded real . . . his [ad] just seemed that he was genuine.”

Janet, who was a newcomer to Rochester at the time by way of Long Island, busted out her stationery imprinted with Ziggy, the short, bald, put upon, everyman comic strip character, and got to replying to Box 1088.

She opened: Well, I never thought I would be answering one of these ads, but yours caught my eye because of the similarities between us.

Her response found its way to Jerry the following week, the same day CITY’s next issue hit newsstands. He called her and they gabbed on the phone for 45 minutes. 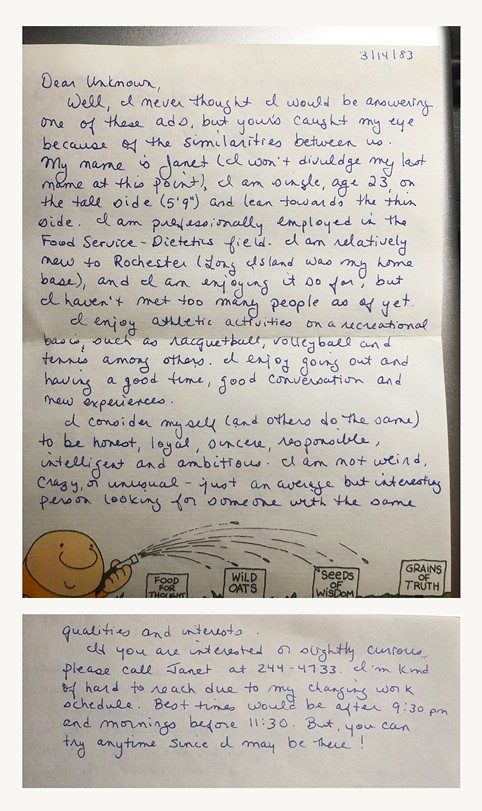 That weekend, they met each other in person and went for a drink at Lloyd’s, a bar on Alexander Street that is now home to Swan Dive. Jerry knew enough about blind dates to end the bad ones at a single drink.

This one wouldn’t end at a single drink.

“I don’t like hidden agendas,” Jerry recalled. “That was part of what I found in the dating scene — there was a lot of game-playing. Janet, from the time we talked, just felt like a very direct straight-shooter.”

After Lloyd’s, they went out for Chinese food. Then they headed to the movies. “Tootsie” was playing. The credits rolled over a still shot of Dustin Hoffman and Jessica Lange walking down a Manhattan street and Stephen Bishop crooning, “Something’s telling me it might be you.”

And then? “We just kept going out, a lot — quickly,” Janet said. Jerry cut to the chase: “We connected on St. Patrick’s Day . . . we were engaged in May, and married in October.”

Janet recalled thinking that she wasn’t planning to get married so quickly but that doing so felt right.

The couple looked at each other and cracked up laughing. They smile and laugh a lot when recounting their courtship. They turn phrases like “blind faith” and “meant to be” with ease.

It wasn’t always that way. For years, Janet and Jerry were hesitant to share their how-we-met story.

“Back then,” Janet recalled, “if you answered a personal ad, you almost felt funny about it. It wasn’t something that you wanted to really talk about.”

“I took a chance on that one ad and I wasn’t interested in answering others,” she added. “I said, ‘Well let me just try this one. I’m just doing one, this one, and it turned out to be the one.”

But times change. Online dating, the profiles of which are not dissimilar from the dog-eared personal ads of previous generations, is an acceptable means of meeting a mate.

And with nearly 37 years of marriage, two grown children, and a family business to their names, the Elmans are comfortable in their own skin.


When they talked about their staying power from their home on Honeoye Lake, it was as if all the lessons they had to impart could be traced to the correspondence they shared through Box 1088. They spoke of persistence and patience and mutual respect and tolerance and open communication.

“You’ve got to go back to finding what brought you together,” Janet said. “No one’s going to outright change somebody else,” Jerry chimed in, “unless they want to change themselves, and that’s how it’s got to be worked.” 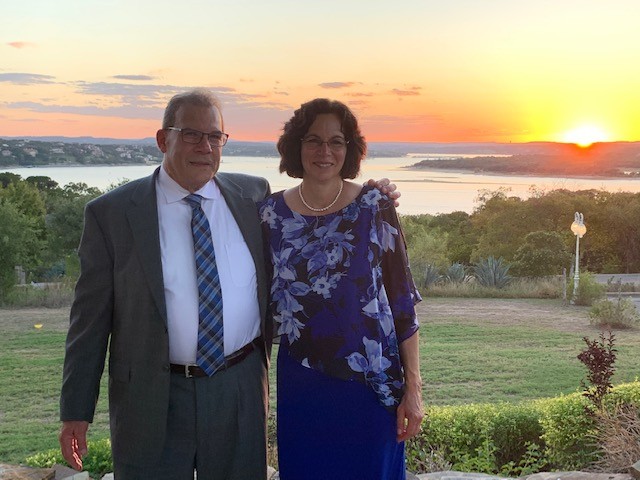 Jerry keeps Janet’s letter on Ziggy stationery in the desk drawer of his office. CITY keeps binders of yellowed back issues at the newspaper’s offices. Finding his personal ad was easy enough.

Asked why he wanted the ad, though, Jerry replied simply, “It’s something I felt shouldn’t be lost forever.”