Checking in mid-way through the Rochester murals project 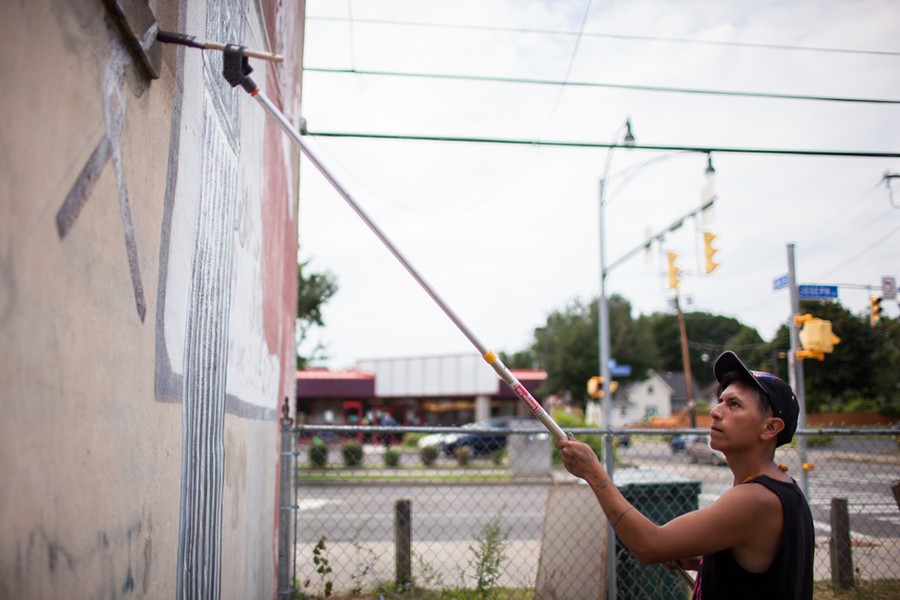 PHOTO BY MATT BURKHARTT LNY adds a chain link fence to his mural at 852 Joseph Avenue, which also features a portrait of Frederick Douglass. “When you’re working in a city, you’re using the city, the history, as a medium,” he says.

The artists discussed their backgrounds, whether their early street- or studio-art endeavors had familial and community support, what informs and inspires their individual creativity, and the many complex facets of creating public art. On the one hand, street art is immediately consumable and accessible to everyone, unlike art that exists only in pay-to-view-it galleries, says LNY. And though much street art pops up in hip, artsy neighborhoods, it is still not widely accepted as part of the high art, white-walls cannon.

Although the festival has received overwhelmingly positive feedback, some of the more persistent contention about specific murals is in regards to the complexities of creating unaudited art in public spaces. Some members of the community persist in claiming that certain imagery is offensive and should be removed. Contrary to these community members’ claims, the artists on the panel said that they approach mural-making with sensitivity.

Like some of the other artists on the panel, Gaia’s mural-making involves traveling many months out of the year. He discussed the benefits and hazards of creating art in a community with an outsider perspective, of cultural relativism and of running into the sentiment, "What right do you have to say anything about my community as an outsider?" "But that’s exactly how we function,” he says, “as perennial outsiders who have to make an attempt at empathy.”

Gaia’s grid of images on the South Wedge Planning Committee building at 224 Mount Hope Avenue incorporates such Rochester iconography as the Mercury statue, the Xerox building, the Aqueduct building, as well as a portrait of an anonymous Rochester kid in a White Sox hat. When I spoke with him earlier in the week, he said he was working with symbols that alluded to culture losing the race against commerce, which isn’t just a Rochester story.

“My primary focus right now is: how do we spiritually understand the world through macroeconomic and geopolitical forces?” says Gaia. “How do we deal with these sublime forces that are way beyond us, through a spiritual lens? Or a way of trying to understand these things that are much greater than us?”

LNY is working along a similar vein of thought in his mural, which is nearly finished at 852 Joseph Avenue. His painting incorporates a portrait of Frederick Douglass, Corinthian pillars, flowers weaving themselves into a chain-link fence, and he has said he plans to add a portrait of Trayvon Martin. LNY says he uses metaphors and symbols as a public language, and the thoughts behind this painting involve the sublimation of individual history when certain lives and deaths take on greater meanings, and begin to represent more than the individuals alone.

Before Gaia begins work in a new location, he does research. “What is the local economy, how do people culturally identify themselves, and what kind of conflict has shaped this space?” he says. After spending a third of his life exposing his art to public opinion, he says he’s “become very reticent of just celebratory aesthetics.”

At one time, Gaia tried to create work that would please everyone. “But now I see myself as a certain lens of honesty, more of an intellectual bridge to something that should be challenging," he says. “The danger of celebratory aesthetics is that you are celebrating one community over another. Trying to paint a utopian picture of ‘we are all together’ is essentially undemocratic and it can border on very difficult cultural and identity politics.”

This led to a discussion of "art by committee," or juried mural projects, which Wall\Therapy is not. “Once you have a structure that creates art, like a mural arts program, it becomes totally top-down and that cuts off a lot of creativity,” says LNY. By adding bureaucracy, the project becomes about communities talking to each other instead of about art, and the process of creating becomes very slow, says Gaia.

At the close of this season, between 27 and 30 murals will have been created in one week, very quickly, with an instant creative energy permeating the Rochester communities. The excitement over the paintings has been evident among spectators gathered at the sites, and throughout social media all week.

“This feels like a grassroots effort that the city has recognized as something valuable to itself, and has just wanted to facilitate,” says Gaia, “whereas something like Urban Walls Baltimore is literally tied into an economic development strategy, so the art comes second.”

“I’ve made a communicable gesture that is immediate and responsive to [this] place,” says Gaia. “People are always contending with one another, communities are always fighting or collaborating, and communicating, and the mural should be an expression of that tension.”

For more information and images of the mural progress, follow @roccitynews on Twitter and check back for future posts.