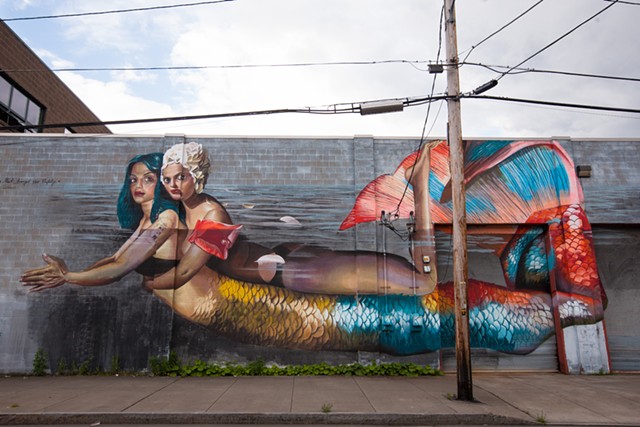 Around the corner from Geva Theatre Center, a gigantic glass whale appears to leap from a cinderblock wall. On Pennsylvania Avenue behind the Rochester Public Market, a swimmer wearing inflatable armbands clings to a mermaid with rainbow scales. Colorful pictures and patterns brighten the footpaths along the El Camino Trail. A large-than-life fox peers out from an alley in the South Wedge. A portrait of a young boy praying to an image of Frederick Douglass adorns a building on Joseph Avenue.

It seems there are monumental murals and smaller public paintings at every turn in Rochester. But that wasn’t the case before Wall\Therapy changed the face of the city.

This summer marks 10 years since the quiet founding of what became Wall\Therapy, the street art festival that was quickly embraced by people in every facet of the city, brought internationally-known muralists to town, and elevated the careers of some local artists. 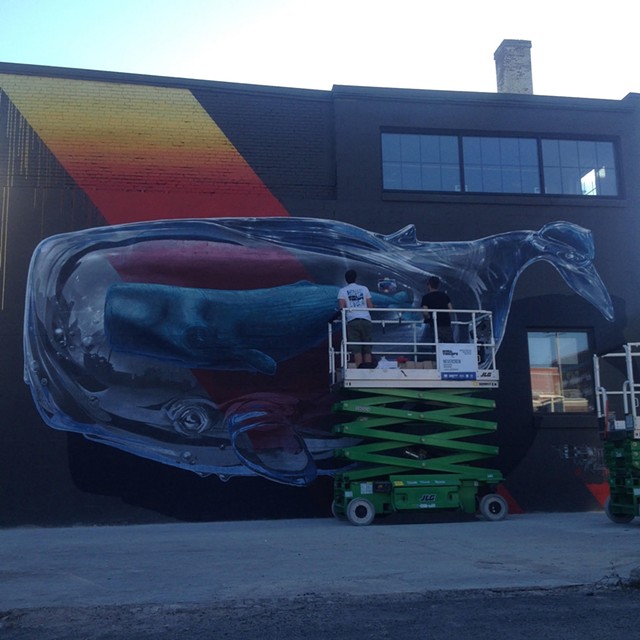 The endeavor, founded by a local doctor and financially backed by private donations and small businesses, has left a mark of more than 135 murals, annual weeklong celebrations of installations, and street art conferences of film screenings, academic discussions about street art and political movements, and creative workshops.

Erich Lehman, the initiative’s lead curator, says plans to commemorate the decade are being organized for 2022, which organizers mark as the official 10 year anniversary because Wall\Therapy wasn’t called such until 2012. And the pandemic made organizing a festival this summer impossible.

“It’s a year of getting our bearings,” Lehman says. 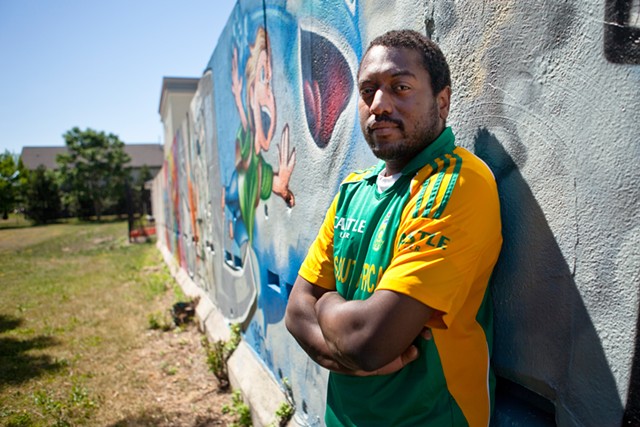 Most people became aware of Wall\Therapy in 2012, the year that artists from Spain, Germany, Belgium, South Africa, California, New York City, and Rochester painted dozens of murals around the city.

But the initiative’s true roots are in 2011, when Ian Wilson, a radiologist who grew up in Brooklyn exposed to and participating in New York City’s graffiti culture, organized a handful of artists to paint a few murals on a long wall on Troup Street and beneath a railway overpass near the Rochester Public Market.

Then, Wilson called it a “visual intervention.” Today, Wall\Therapy defines itself as “an art and community intervention project, using public murals as a means to transform the urban landscape, inspire, and build community.”

“I wanted to get the city to realize it can be more than it is,” Wilson says.

Murals are perhaps the most apparent evidence of a city’s artistic culture. Wilson knew he wanted to see large-scale murals all over town, but his first step was to test the waters by bringing together local and international artists for a quiet project.

Through a mutual friend, he connected with South African-based artists Faith47, Freddy Sam, MakOne, and DALeast, to collaborate with Rochester artists Shawn Dunwoody, Kurt Ketchem, and members of the graffiti crew FUA Krew on a mural on Troup Street.

They dressed up a drab, low wall with a simple message in block letters: “BELIEVE.” Between each letter were illustrations by the artists meant to inspire. A kid joyfully soaring through the air. A child daydreaming in astronaut gear. Text that read: “We must teach our kids to dream with their eyes open.”

That mural was followed by others in future years. There was that boy from Joseph Avenue painted alongside Frederick Douglass by Ecuador-born, New Jersey-based artist LNY. A local waitress became the muse for Canadian artist Jarus’s mural, “Avery,” on a brick silo in the Fedder Industrial Complex on Main Street. Iran-born, New York City-based brothers Icy & Sot painted a massive child drawing dreams into reality in the Neighborhood of the Arts. The mermaid and swimmer on Pennsylvania Avenue was the work of German artist Case, and the translation of its German title is “Success depends on courage.”

“Art itself doesn’t fix things, but it can inspire change,” Wilson says. “I wanted the murals to be a constant message to the community about who we are and a reminder of how capable we are.” 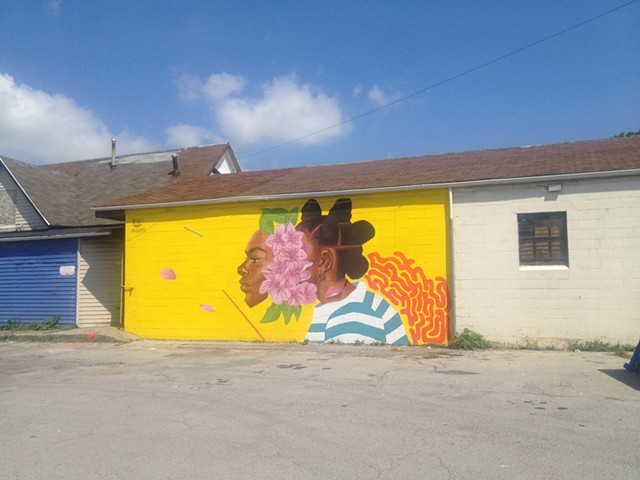 Within a couple of years, word about the city’s enthusiasm for the Wall\Therapy festival had spread among international muralists. A vast web of connections opened for organizers, and Wilson says he then realized his vision was coming to fruition.

Wall\Therapy alum and Baltimore-based muralist Andrew Pisacane, whose artistic moniker is Gaia and who has put up work in many cities and curated public art projects funded by the National Endowment for the Arts, says the camaraderie of Rochester’s art community set a welcoming tone.

“What truly set Rochester apart from other festivals was the attention to diversity, inclusion, and incorporation of local talent that was sorely missing from the European-dominated street art scene,” he says. “Additionally, Wall\Therapy acknowledged the public health impact murals have upon their surrounding environment.” 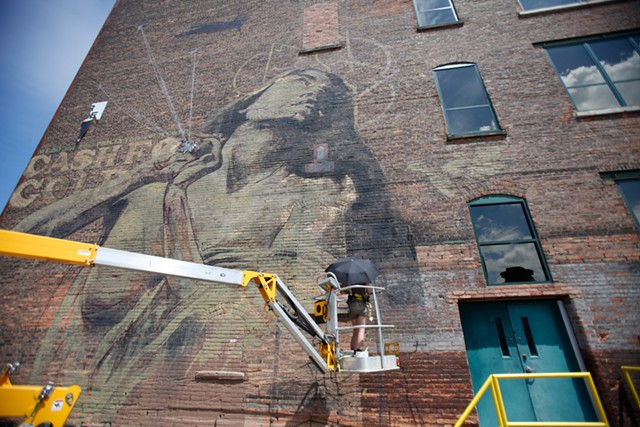 The festival even attracted photographer Martha Cooper, who is renowned in graffiti and street art circles for elevating and legitimizing the artform in the eyes of the wider art world.

City residents showed their enthusiasm by opening their hearts, homes, and wallets.

For several years in a row, organizers held a month-long crowdfunding campaign in advance of the summer festival, and routinely raised in excess of $30,000. Artists from Rochester and abroad donated works to incentivize supporters.

City Hall accommodated the projects with the necessary permits. Property owners “donated” walls on commercial and residential buildings for murals that they didn’t approve in advance. They just trusted the process.

Visiting artists found warm beds and meals in the homes of Rochesterians. A network of dozens of volunteers donated time to get artists materials and meals. Some global, in-demand muralists agreed to lower commissions than they typically command to paint in Rochester. 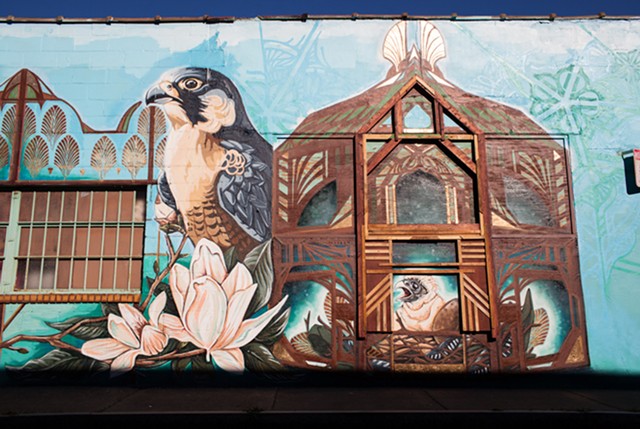 Dozens of local artists, some of whom had no experience making public art, were paid to make murals. Some of the younger ones found encouragement and direction, and furthered their careers through connections they made. Among the locals are Sarah C. Rutherford, Aerosol Kingdom (then MR. PRVRT), Thievin’ Stephen, and Brittany Williams.

Last year, Wall\Therapy quietly financed mini-grants for a handful of local artists who painted walls in the Public Market, off West Main Street, and elsewhere, or to support other artistic community projects. 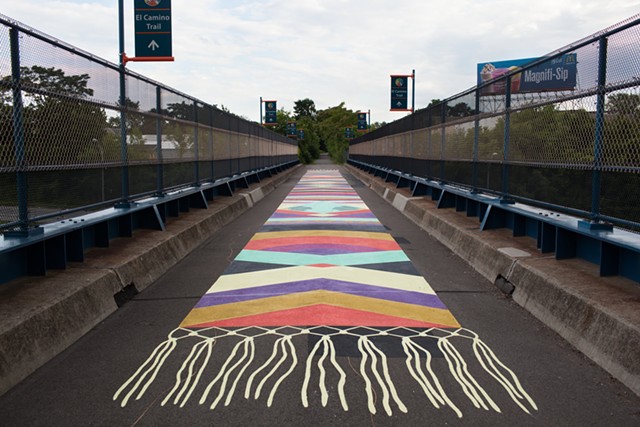 Not everyone was a fan of every mural.

“The audacity of the project,” Wilson says, “is that it was a covenant between the organizers and property owners. There was an acute reaction from some.”

One notorious example was the reaction to Belgian artist ROA’s “Sleeping Bears” on St. Paul Street, a black-and-white line painting that generated anger and snarky social media chatter from people who saw something lewd in the mural. Online, the work was derided as “the 69-ing rats,” and a local artist whose loft window faced the mural said at the time that he had kept his shades drawn since it was painted.

ROA, whose work frequently depicts animals native to the places he visits, told CITY at the time that he found it interesting that locals didn’t recognize what bears look like, and mistook their long snouts for rat features. He had originally considered adding another bear to the mix, he said, but stopped at two after so many people stopped him working to comment on the sex act they saw.

“Rochester got the mural it asked for,” he said. 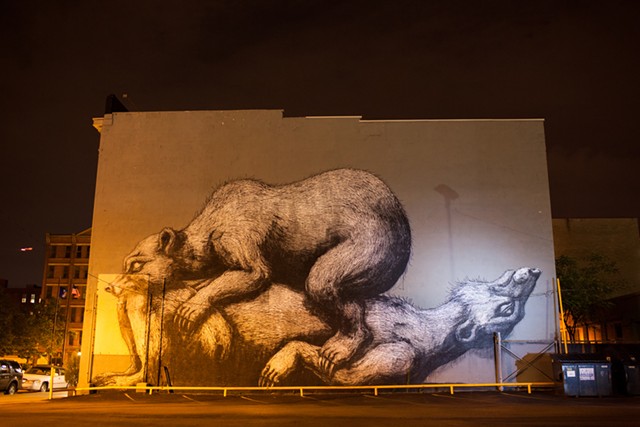 “Sleeping Bears” was defaced in July 2021 by an unknown vandal who sprayed it with gray paint.

Other murals also sparked contention. Some parishioners of Our Lady of Victory, a Catholic Church on Pleasant Street, objected to the imagery Faith47 painted on a wall of the Michaels-Stern building facing the church. “Rhapsody” is a grayscale and golden depiction of a Saint Teresa-like figure with a breast exposed and a dark silhouetted figure flying overhead.

A few others generated negative chatter, but Wilson says that was to be expected and that the response to the murals in general was overwhelmingly positive.

“There's been a response to several of the works, which was just fine with me, because what it did was cause a conversation to take place that wouldn’t have taken place otherwise,” Wilson says. “Art is a very individual thing, and people have a right to express their dissatisfaction.”

Organizers say they were wide open to having conversations with the malcontent, and in the few cases where detractors wanted a mural removed, Wilson offered to connect them with the building owners, who are ultimately the “owners” of the art.

“If you think that everything you're doing is beyond criticism, you probably shouldn't be doing work in public, period,” Wilson says.