Walking on the riverfront 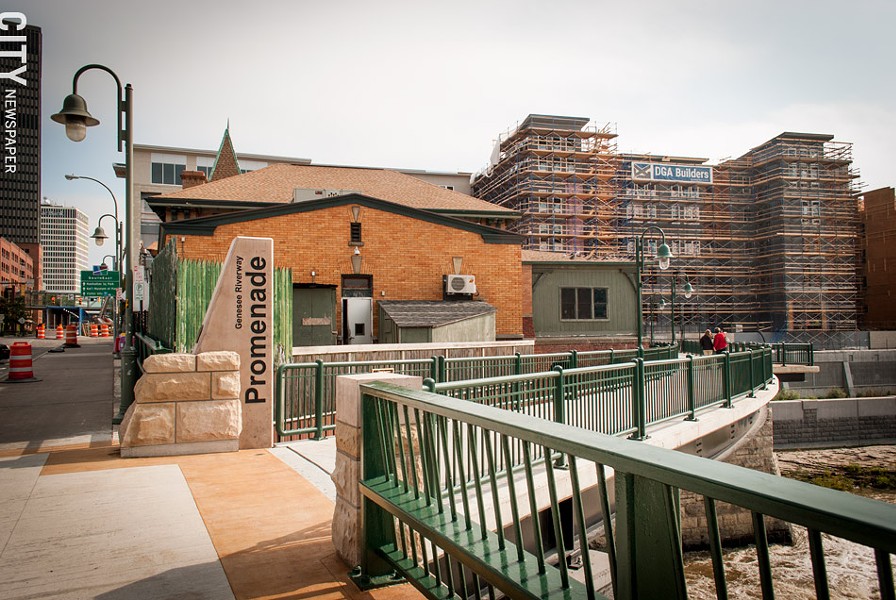 PHOTO BY RYAN WILLIAMSON The new Erie Harbor Park walkway is behind Dinosaur Bar-B-Que, off of Court Street.

Just west of Dinosaur Bar-B-Que, jutting out off of the sidewalk on the Court Street Bridge, is the entrance to a new pedestrian walkway that swerves out over the edge of the Genesee River. It then heads behind the restaurant where it stops for now due to construction of the new Nathaniel apartment complex on the east side of the river. But in that short span of about 100 feet is one of the city's best up-close views of the river and its rushing force just below.

The walkway, which is open to the public now, will eventually connect to a promenade next to the apartments. The project, which has been named the Promenade at Erie Harbor Park, offers a glimpse of how the city's ROC the Riverway plan is taking shape and will dramatically transform the public's access to the river.

When the promenade is completed, pedestrians will have a much more engaging experience with the Genesee River, something entirely different from driving over the river and seeing it from a car. You'll be close enough to hear the Genesee, which can be quite forceful at times as it flows over the Court Street Dam. And the views are spectacular: you can see the dam, the Frederick Douglass-Susan B. Anthony Bridge, the aqueduct, and portions of downtown.

You'll also be closer to some of the river's wildlife: seagulls swirling overhead, ducks paddling in the shallow ends of the river, cranes perched on logs and rocks.

The walkway's central location will eventually connect some of the key elements of the ROC the Riverway project: the ROC City Skate Park to the south and the aqueduct to the north.

City planners hope that as more of the pieces of ROC the Riverway are completed, the underutilized riverfront will attract more development, downtown activities, and tourists.