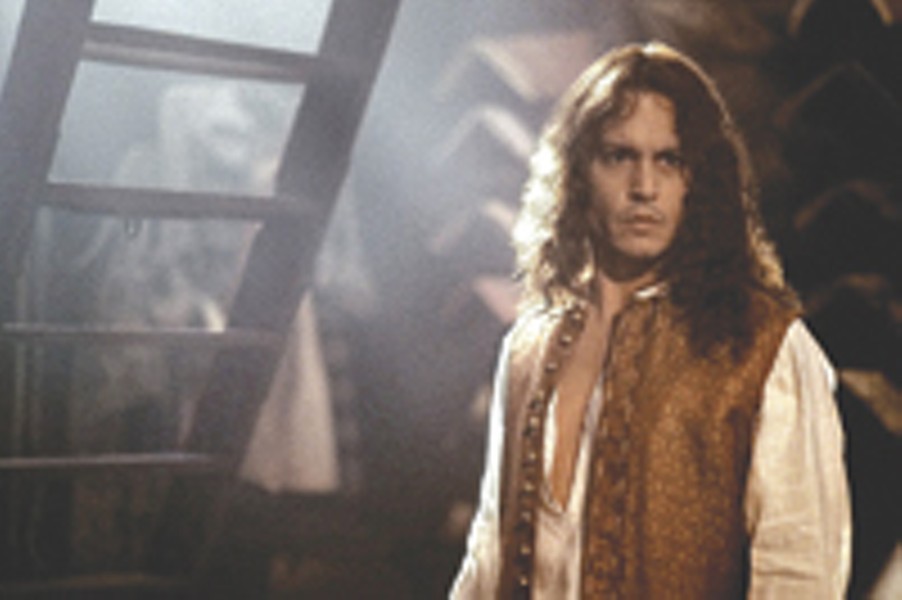 The Weinstein Co. An entirely dull debauchee: Johnny Depp in "The Libertine."

Continuing to mine the past for subjects to dress up in frills, lace, and periwigs, the motion picture industry, perhaps inevitably, has now dug up the 17th century poet, playwright, and pornographer, John Wilmot, Earl of Rochester. (How's that for the daily press's beloved local connection?)

Though probably not exactly a familiar name these days, the profligate aristocrat and notorious voluptuary offers some useful material for the cinema, even without all the period costumes and attitudes. The particular period itself, the English Restoration, in fact features enough violence, licentiousness, and political intrigue to fill up a number of movies.

That Restoration refers to the return of the monarchy to England in the person of Charles II, after the Puritan Revolution and the Commonwealth Interregnum of Oliver Cromwell, whose victorious forces beheaded the king's father, Charles I. The reopening of the theaters, after the repression of the Puritans, and the general sense of release from constraint, inspired a kind of comedy that depended heavily on awareness of social class, the behavior of high society, sexual manipulation, and a brittle verbal wit. A number of playwrights flourished under the new regime, including Rochester (Johnny Depp), the libertine of the title, a personal favorite of the king (John Malkovich), something of a rake himself, who fathered a number of illegitimate children, in Dryden's words, spreading his maker's image through the land.

In examining the character and his brief, tempestuous life, the movie situates most of its action in the London theater, where Rochester befriends a young actress, Elizabeth Barry (Samantha Morton), whom he trains, according to the script, in something like an early version of the Stanislavsky Method. He forces her to rehearse endlessly, to find something of a character and an emotion in herself, and to deliver her lines in a naturalistic manner. Aside from that, the young aristocrat spends the rest of his time dashing off his often obscene works in the accepted manner of the gentleman amateur, sneering at everyone he encounters, and happily destroying his talent and his health in colossal debauchery.

Despising those around him, apparently including his wife and mother, contemptuous of rules and customs, proud of his commitment to self destruction, Rochester commands a small squad of aristocratic wits, including the playwright George Etherege (Tom Hollander), who join him in dedicated dissipation. His friend the king, who intermittently banishes him to his country estate and recalls him to London, commissions Rochester to compose a play for the visit of the French ambassador, whose own government Charles hopes to tap for funds.

After that catastrophic offense to the king, Rochester descends into a kind of concentrated self destruction, wallowing in drunkenness and sensuality, willfully, perhaps desperately, seeking some inexplicable immolation. Finally, dying of syphilis, that common affliction of the time, he attains one last triumph, a speech in Parliament defending his former friend and patron, King Charles.

Looking as if all its interiors were filmed in candlelight, The Libertine conveys some sense of the gloom, filth, and squalor of Restoration England, which nicely reflects the moral conditions of the time --- the sun never shines and the characters all walk ankle-deep in mud and knee-deep in decadence. Despite that attention to the look and language of the era, the picture pretty much settles on one central point, its protagonist's reiterated, absolute dedication to outrageousness of every kind, and stays there throughout.

Although the character of Rochester adds to his often admirable list of unorthodox roles, Johnny Depp's petulant androgyny and layered mannerisms soon grow tedious --- from start to finish, nothing alters the patronizing tone, the constant obscenities, the languid posture, the permanent sneer, ultimately making him, appropriately for the picture, an entirely dull debauchee.