PHOTO BY MAX SCHULTE Voter heads in to cast their ballot in the Mendon Fire District election on Tuesday, Dec. 8.
On a Tuesday afternoon in December, Charlie Ennis donned a Vietnam Veteran baseball cap and a flannel shirt and made the short jaunt from his home off Latta Road in Greece to the firehouse down the street.

He went to vote for a pair of commissioners in the North Greece Fire District, an annual exercise in civic duty Ennis figured he had completed for the last 25 years.
Polls opened at 2 p.m., and when they closed seven hours later, Ennis was one of 361 people to cast a ballot in a race that included four candidates, according to the election results.

“Citizens in a fire district, or in any election, should take an interest in the society they live in,” Ennis said. “Whether it’s any election, when they can have a voice in the community, in society, hey, go for it.”

In Monroe County, few people go for it.

Each of the county’s 23 fire districts holds elections for commissioners on the second Tuesday of every December, and collectively they draw a fraction of 1 percent of registered voters. In most places, turnout can be counted in the double digits.

Voters could be forgiven for overlooking a fire district election. The annual races are held by statute during a busy holiday season and are, for the most part, poorly advertised. Notices for some elections are prominently displayed on firehouses’ exterior marquees, but most languish on bulletin boards inside firehouses or on district websites that few people visit.

The media, too, gives short shrift to fire district commissioner contests, in part because they aren’t sexy. Running for a commissioner seat requires a candidate compiling a mere 25 signatures to get on the ballot, and campaigns are typically word-of-mouth affairs.

Interviews with voters and commissioners during what could glibly be called the campaign season in December suggested that most people who cast a ballot are either firefighters or family and friends of firefighters.

“It’s kind of tough, it doesn’t get the publicity,” said Bill Lawrence, a veteran firefighter in the North Greece Fire District. “It’s important that people know what the real issues are.”

What is at issue in any given commissioner election is oversight of anywhere from hundreds of thousands to several million tax dollars, depending on the size of the fire district.

The tiny Mumford Fire District that services Scottsville, for example, operates on an annual budget of about $350,000. By contrast, the North Greece district levied $11.1 million in taxes this year.

Fire districts are autonomous units of local government, independent of the towns and rural communities they serve.

City dwellers might not have ever heard of one. Rochester, like most cities and even some large towns and villages, funds its fire department through its municipal budget. But outside the city limits, fire districts are how small communities get fire services.

Districts are run by a board of five commissioners, each elected to serve either two- or five-year terms, that is authorized by state law to levy taxes and set budgets to pay for fire protection.

There are 750 fire districts across New York that together levied $807 million in
property taxes last year, according to state Comptroller’s Office records. The 23 districts in Monroe County collectively taxed residents to the tune of $79.2 million.

A CITY analysis found that the tax burden in Monroe County varies from district to district, in some cases drastically, depending on a variety of factors that include property values, the size of the service area, and whether districts are staffed with paid or volunteer firefighters.

For instance, the tax rate for services in the Barnard Fire District, which covers the south side of Greece with a staff of professionals and volunteers, is $6.57 per $1,000 of assessed property value, while the rate in the Pittsford Fire District, which is made up entirely of volunteers, is 68 cents per $1,000 of assessed value.
That translates to the average homeowner in Barnard paying roughly $890 per year in fire district taxes compared with $188 for the average homeowner in Pittsford.

There are a variety of factors driving the decline, from volunteers opting for paid jobs to the dicey proposition of risking one’s life for no pay. In the end, D’Alessandro said, the taxpayer feels the difference.

Like other taxing entities in New York, fire districts are by law capped at how much they can raise taxes each year. But commissioners can vote to override the tax cap, and they frequently do.

Consider the spike in taxes the Laurelton Fire District in Irondequoit collected last year. The district was limited to levying a little more than $1.3 million, but commissioners overrode the cap and took almost $1.7 million — nearly 28 percent in excess of the limit.

Commissioners in the Ridge-Culver Fire District have voted to override their cap every year for the last 10 years, according to the state comptroller’s records. In 2012, the district’s tax levy was $2.6 million. In 2021, it will be almost $4.4 million — an increase of 66 percent over the decade.

Keeping fire district taxes in check in a region that already nearly tops the nation in its property tax burden compared to property values is what drives Joe Camiolo to keep running for a commissioner seat in his district of North Greece. A volunteer firefighter there since 1971, and a former commissioner, he lost the race last month but plans to run again next year.

North Greece commissioners overrode the cap for this year to bring its tax levy to $11.1 million. Ten years ago, the levy was $6.9 million — an increase of 61 percent.

“I am very concerned about tax increases,” Camiolo said. “The governor has a tax cap, and this year it’s vastly exceeded, and they won’t see it until their tax bill in January.”

Firefighters and commissioners attributed the voter apathy to a general satisfaction with fire services: when there’s a fire, the fire department shows up.

But the lack of participation and insular electorate has not gone unnoticed in Albany, where some lawmakers are pushing legislation to modify the way fire district elections are conducted. 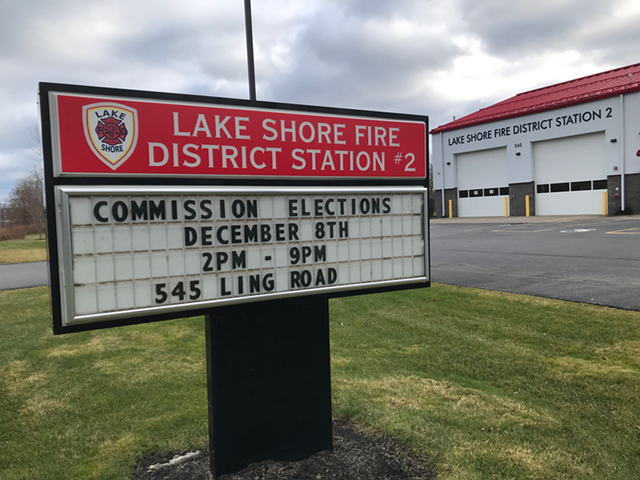 The elections are governed by the state’s Town Law and not subject to the same oversight as general elections, despite districts managing millions of tax dollars.
Polling hours typically span from 6 to 9 p.m. in most districts, and commissioners decide how polling sites are staffed and who will count the votes. Districts are permitted, but not required, to use voting systems compliant with state Election Law.

Most districts use paper ballots, and while state law bars commissioners from being ballot clerks, there have been instances in the past where relatives of commissioners were reportedly tapped to count ballots.

Another member of the Assembly, William Barclay, a Republican from Syracuse, has introduced a bill to hold fire district elections on the same day as general elections.
For Abinati, measures like these are about transparency. As the system stands, the traditional checks and balances of most local government elections are not present in fire districts.

Abinati acknowledged that fire commissioner races will likely never draw the same interest as contests for mayors or county executives. But, he said, perhaps they should.

In the last five years, 126 fire districts were audited by the state Comptroller’s Office, and most of them were flagged for having inadequate controls over all matters of finances, from credit card use to purchasing and safeguarding assets.

One of them was the St. Paul Boulevard Fire District, which auditors found “did not adopt realistic budgets,” over-estimated expenditures by nearly $1 million over four years, and bought a new insurance policy from a company that employed a commissioner who sat on the board’s insurance committee.

“These people are in this 24 hours a day,” Abinati said of firefighters. “They go to the firehouses at night after work, they hang out, they help each other out, they polish the equipment, God bless them, they do a great job.”

This article has been updated to reflect the Ridge-Culver Fire District is in Irondequoit.