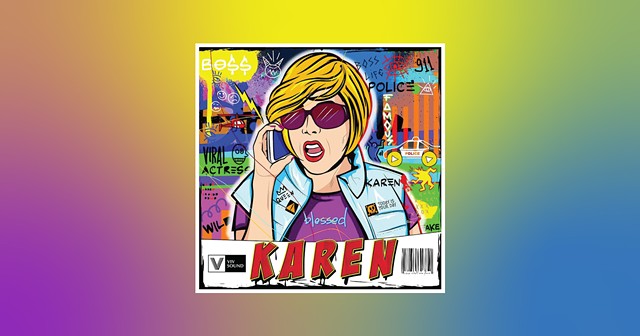 If being unable to get a manager to honor expired coupons doesn’t arouse a miffed spirit in a typical Karen, then an anthem that exploits the tantrums of these over dramatic women known as Karens and asks them “Why are you so mad?” will definitely brew up some sentiment.

The name at hand rose in popularity during the 1960’s, when it was the third-most favored name for baby girls. It can be traced back to biblical times and in Hebrew is defined as “Ray”-as in ray of sunlight. Today, the name holds a much different value — maybe even a lesser value — since in recent years it has become a phrase used to shame a woman, generally a Caucasian woman, for using her white privilege to dominate circumstances in a way that best suits her emotions and potential gain.

On April 18, John Viviani of Viv Sound released a single titled “Karen,” which received nearly 7,000 streams in just a few short weeks. This tune might leave one intended audience — Karens — feeling a little flustered, and the other intended audience — victims of Karens — overjoyed to be able to trigger the first.


The song also offers a touch of humor as it portrays a Karen trying to orchestrate her hissy fit routine. She is met with a little push back from Viv, who sings “I know you’re used to getting your own way, but I ain’t having that shit today.”

The classic Karen quotes, “Can I speak to the manager….I’m calling the police,” can be heard in the song near the end. Viv sings “Karen, Karen, why are you so mad?”
I asked Viviani what inspired the song.

“I would say the song is inspired by my own true feelings,” he said. “I personally haven’t had a face-to-face Karen experience. I like songs that are topical and it just seemed like an easy song to write as I thought about how someone might feel when confronted with a Karen in the real world. The song started with the first few lines of the song (lyrics first) and the rest of the song took shape pretty quickly and easily after that.”

You can listen to “Karen” on Spotify under Viv Sounds.