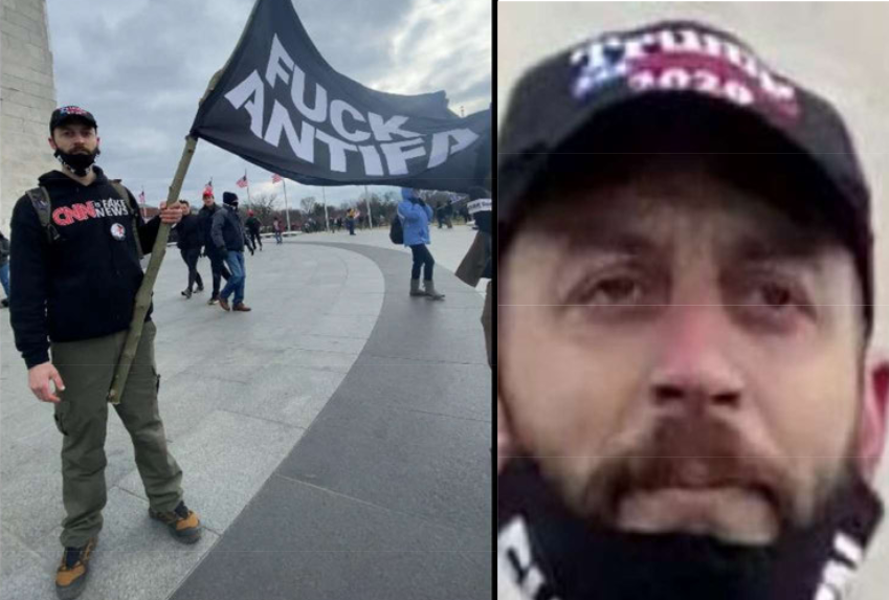 US DEPARTMENT OF JUSTICE Daniel Warmus was sentenced Wednesday for his part in the Capitol Riot. His videos as a "First Amendment Auditor" are part of the reason City Hall has heightened security measures.
Rochester City Hall, the Romanesque building of brown sandstone at State and Church streets, had an open-door policy for about 140 years before an auto mechanic walked inside in August with a video camera claiming to be a “First Amendment auditor.”

Since then, an extraordinary new security strategy was put in place.

Visitors, who could once access the building through multiple entrances with minimal security, now are only permitted through the front door. They must empty their pockets, walk through a metal detector, and get wanded by a security guard.

At nearly every stairway and door is a sign warning of “limited access,” with the threat of arrest for people attempting to pass through once open areas.

“I’m not going to invite somebody up to the law department who has intentions to harm me,” said city Corporation Counsel Linda Kingsley in defense of the new measures.

On Wednesday, the man responsible for those measures was sentenced to 45 days in federal prison and two years probation for breaching the Capitol Building in Washington, D.C., on Jan. 6, 2021.

Daniel Warmus, an auto mechanic from the town of Alden in Erie County, is the creator of the YouTube channel “Auditing Erie County.” In dozens of videos posted on the channel, Warmus filmed police or the interior of government buildings with the apparent intention of eliciting a reaction from officials in order to claim that his civil rights were being violated.

In August, Warmus did his routine at City Hall in Rochester, which was built in the 1880s. He wandered around the building filming everything from paintings to documents on employees’ desks, before ultimately being removed by security guards. The video of his visit has garnered nearly 60,000 views on his YouTube channel, and hundreds of comments blasting the response of security guards.

A second “auditor” came through City Hall the next day, crossing paths with Kingsley on the second floor of the building. In that video, Kingsley’s name and phone number are displayed as she argues with him.

Kingsley said emails and phone calls began to flood into her office in the following days.

“Control your n—rs and stop being a dumb c–t,” read one email provided to CITY. “Stinking blacks need to be all in jail, you too b–ch.”

“You are clearly the dumbest b–ch alive,” another reads. “Your pathetic a tyrannical redcoat socialist eat f–k and die b–ch.”

At the request of Rochester Police Chief David Smith, a police car be parked in front of her home as a result of threats.

“I don’t expect this,” Kingsley said. “I expect to be subject to a certain amount of public criticism, sure. But my staff, how do you think concern was for them? When their boss was getting death threats?”

Alongside his videos, Warmus posts on his webpage names and contact information for dozens of city officials.

“If you choose to redress your grievance to your government or public servants witch IS your Constitutional Right, remember there is a fine line from redressing your grievances and making any THREATS!” the webpage reads. “YOU DO NOT REPRESENT AEC or the movement of accountability if you make any threats! That is a crime and NOT supported in any way.”

The post ends with contact info for a Buffalo attorney, Brittany Penberthy, advising people who need legal assistance to “tell her Auditing Erie County sent you.”

Warmus was one of the first rioters to reach the Capitol rotunda on Jan. 6 last year. He was on pretrial release when he made his video at Rochester City Hall and recorded other “Auditing Erie County” footage.

His lawyer, Daniel DuBois, argued that Warmus was a changed man.

“Since his arrest, his life has improved in many ways,” DuBois wrote in papers he submitted in federal court in September. “He has all the confidence in the world that he can put the poor decisions made by him on January 6, 2021 behind him and continue to thrive, improve, and most importantly, continue to be a productive member of society.”

But, as reported by The Buffalo News, prosecutors pointed to the video he made at City hall in Rochester as proof that Warmus had not changed..

“The fact the defendant engages in this conduct while he’s on pretrial release, while he’s under supervision, shows brazen disrespect for the court, for law, for law enforcement and completely dispels the notion the defendant is a changed man or has reflected on his actions of Jan. 6,” the federal prosecutor, Kathryn Fitfield, was quoted by The Buffalo News as saying in court.

At City Hall, business is returning to normal, albeit with less freedom to roam its floors and corridors.

Kingsley said there were plans to buy metal detectors before Warmus showed up, but that his actions spurred their implementation and that of other security measures.

She said City Hall is balancing keeping the building open to the public, as it is legally required to be, while also keeping its employees safe.

“The building is open to the public, to the residents of Rochester, for people who do business in Rochester to do business,” Kingsley said. “We’re not going to let them make it difficult for everybody else.”

Correction: The original version of this story stated Kingsley requested a police car at her home. The request was actually made by Chief David Smith.