In flourishing civilizations, public art was funded by the ruling class as a marker of how well society was doing. But in America today, arts funding always seems to be first on the chopping block. So it's rather amazing that during the Great Depression, when President Franklin Delano Roosevelt's New Deal sought to create jobs for the throngs of unemployed Americans, some of that funding was reserved for artists. The Memorial Art Gallery's new exhibit provides a fascinating window into how the Works Progress Administration benefitted Rochester artists, through preparatory drawings for WPA-commissioned murals, and other related objects.

The core of the exhibit is formed by Carl W. Peters' studies for WPA-commissioned murals he created in Rochester, as well as reproductions of the murals. Some of these murals still stand in Rochester today, in high schools and at the former Fairport Library, now the Fairport Historical Society. A few, such as "Rochester, Past, Present, and Future," which was installed in what is now the Times Square Building, have been destroyed by renovations. 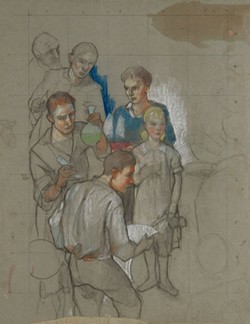 Peters' drawings and paintings were donated to the MAG in 2009 by Nancy Miller Batty, whose family was close to the Peters family. The works had languished in her family's basement since Peters' widow asked the Millers to help manage his estate 30 years prior.

In the murals, Peters has flattened out space with thick outlines and packed layers of activity in the fore, middle, and backgrounds. His use of color is vibrant and at times unexpected, with saturated shadows or the rosiest highlight on a cheek. The scenes are downright utopian, full of beautiful, healthy, hardy people with stoic expressions, each engaged in different modes of work that are represented to be as crucial as the next.

There is a storybook sentiment to these visions of harmony, whether depicting contemplative, farming, or industrial life. Not all of the murals focused on industry. Peters also painted historic scenes of Rochester, such as "The History of the Lake Ontario Region" at Charlotte High School, which showcases the shift in lakeside life from the Seneca to the settlers.

The murals reveal a respect for regional history, as in the scene of hard-working farmers in "The Early Days on the Erie Canal," his 1938 mural still on view at the Fairport Historical Society. They also showcase the resilience of the human spirit — and the desire for good, dignified work — through the darkest days of the Depression. "Almost all of the history that I've retained in any significant way, I've learned through art," says MAG's Curator of American Art Jessica Marten, who assembled this impressive exhibit. "That's how history becomes meaningful to me, and this is a great example of that," she says.

The exhibit also provides ample information about the history of the Depression, FDR's New Deal, the origins of the Works Progress Administration, and the other ways the WPA benefitted Rochester, including improvements made to our city's infrastructure.

For example, one display case holds a "WPA in the Flower City" pamphlet and a construction report opened to a page with photographs of a stretch of Dewey Avenue, before and after it was paved.

Another display case holds a "Work, Progress, Action" board game, with cards that have both beneficial directives and setbacks like project defunding and taxes. The sole monetary denomination is a stack of million-dollar bills.

Dozens of watercolor, charcoal, or pastel studies complement reproductions of the finished murals, allowing visitors a unique behind-the-scenes peek at the artist's process. Viewers are privy to decisions Peters made between preliminary pitches and the finished product. Also present are some documentary photographs of Peters on-project and various assistants helping to bring the murals to life.

Slideshow Art for the People 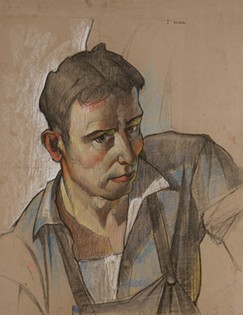 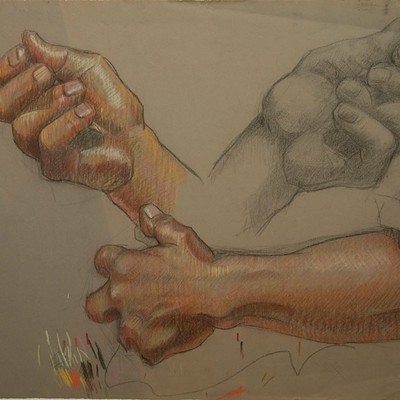 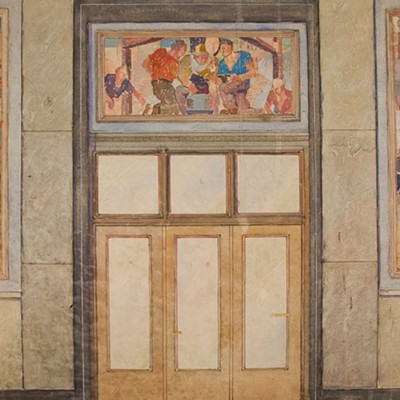 Some of the images are rather raw, and contain stains or puncture marks from being tacked to a studio wall. "These drawings were used as tools. They were not meant to be framed and hung on walls," Marten says.

The story of the WPA in Rochester is connected to the MAG not only because of its valuable archive, but also because MAG leaders and sisters, Gertrude Herdle Moore and Isabel Herdel, were champions of Peters' work. In addition to being awarded 14 WPA mural commissions in Rochester, Peters held a teaching position at the MAG's Creative Workshop.

The Federal Art Project branch of the WPA is the arm that benefitted artists nationally and locally. Peters, who had already made his name as a talented painter, was having trouble selling work and so he enrolled in the program.

The presence of three atmospheric oil paintings Peters made in the 1920's and '30s truly showcase how different his own work was from what he created for the general public. It is easy to feel the chill in the air when viewing Peters' paintings, which depict sweeping vistas of snow under crisp skies, or columns of steam rising among bright bricks and the muddy Genesee under blanketing clouds above. He had a strange knack for making the dirty dregs of winter look bright, even uplifting, and a certain ability to make a still picture of the Rochester of almost a century ago feel fresh and alive today.

One of the exhibit's side room contains a series of stylized PSA posters, regarding breastfeeding, tooth-brushing, and getting tested for syphilis, created by Rochester Federal Art Project supervisor, Eric Hans Krause. In another room, visitors can watch "Enough to Live On: The Arts of the WPA," as well as a video produced by WXXI about the recent Wilson Magnet High School student mural project, for which students created a mural to accompany the two Peters' murals in their auditorium.