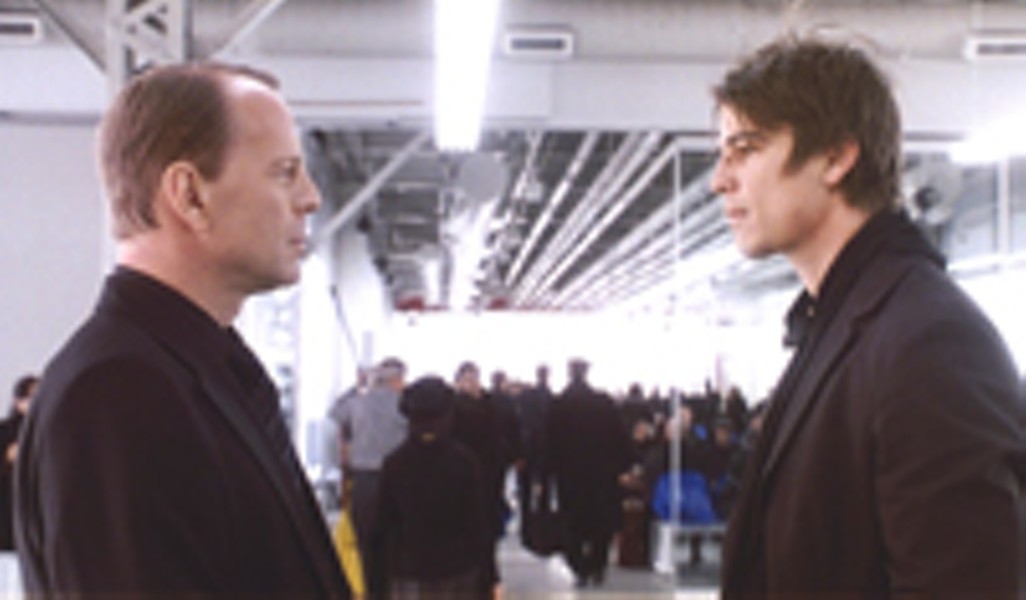 One of the most unusual action thrillers to appear in recent months, or even years, Lucky Number Slevin maintains a constant flow of action in the slam-bang, shoot-'em-up, stack-'em-up mode, while depending for much of its appeal upon a puzzling tangle of plot and motivation. Although packed with violence of all kinds, the picture also features several comical moments, a quantity of witty dialogue, clever camera work, and some truly ingenious architecture.

Lucky Number Slevin in effect begins several times, showing a series of apparently unrelated incidents in rapid montage, all actually linked by a ledger that turns out to be a record of a bookie's business, a list of his payments and payouts. In addition to its numbers and decimal points, the ledger soon displays punctuation marks of blood when a mysterious assassin kills the bookie by throwing a baseball at high speed and hitting him right between the eyes, which must qualify as a very special strikeout in both the major leagues and Hollywood. Like much else in the opening sequence, and the rest of the film, later events will explain that puzzling act and identify the killer.

The picture then settles into a situation reminiscent of hundreds of comedies and scores of thrillers, a familiar case of mistaken identity. A young man with the unusual name of Slevin (Josh Hartnett), staying in his friend Nick's apartment, finds himself accused of being Nick. On two separate occasions two sets of brutal thugs --- including perhaps the first pair of Hasidic tough guys in cinema --- rough him up and escort him to their respective superiors, two warring mob chieftains known as The Boss (Morgan Freeman) and The Rabbi (Ben Kingsley).

Each kingpin, to whom Nick owes a good deal of money, offers Slevin a chance to repay the debts by committing a murder --- Freeman wants him to kill The Rabbi's son and Kingsley wants him to knock off The Boss. These are offers that, as they say, he cannot refuse. The conundrums and complications proliferate as the cops also take a strong interest in Slevin, and another mysterious figure, a professional assassin named Smith (Bruce Willis) who works for both crime lords in a sort of triple cross, joins the forces against him.

Along with the numerous beatings he endures as a sort of punching bag every time the various thugs and the cops show up, Slevin must somehow figure out a way to fulfill his assignments and elude the law. Despite the desperation of his plight, much of his behavior teeters on the brink of comedy, and even the most brutal and menacing in the film often appear more zany than scary. The whole movie, in fact, constantly mixes considerable visual humor and a great deal of snappy dialogue with its frequent and sometimes shocking violence.

In keeping with its tangled and volatile situation, Lucky Number Slevin employs an extremely intricate narrative method. Besides its several rapid juxtapositions of ostensibly unrelated scenes and sequences, the characters in the picture frequently tell each other stories, some of them enclosing other stories, so that the narrative keeps doubling back, interrupting itself, each time adding more content and increasing the potential for interpretation.

Each story displays a distinct visual style, some appearing in the harsh colors of aging film stock, others in brighter shades, others proceeding at different speeds, and some recapitulations of previous events moving in rapid motion. In a clever split screen, using three different images simultaneously, Willis and Hartnett play chess with the same opponent while Willis outlines his plan to kill for both bosses and double cross just about everybody.

The rapid, witty dialogue, the alternations of tone, the frequent scene changes, and the sudden, startling moments of violence keep the picture moving at a terrific pace. At the same time, the unflinching presentation of at least a dozen killings, some at the most unexpected moments, suggest a level of commitment to the bloody demands of the thriller that transcends ordinary film comedy. Its verbal and visual agility, combined with its quirky, offbeat humor, make Lucky Number Slevin a most original and stylish interpretation of its genre.