Vietnam before our war 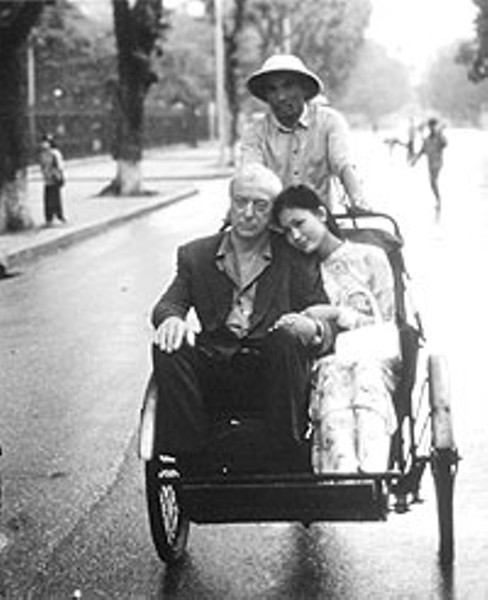 On a slow cart to Saigon: Michael Caine in "The Quiet American."

Graham Greene's novel, The Quiet American, published in 1955, has probably aroused more controversy than any of his other many works of fiction. In dealing with the first tentative intervention of the United States in Vietnam, at a time when the French fought their hopeless colonial war, the author displayed both uncanny prescience about the larger war to follow and a powerful distrust of this country, which naturally inspired resentment in American reviewers. The first film adaptation of the book, in 1958, the heyday of anti-Communism, tactfully obliterated most of the anti-American sentiments, along with just about everything else. Oddly, it took many months for this new film to achieve general release, because the people at Miramax feared drawing the wrath of a new set of jingoes in the present political climate: times change, but what some people think of as testicular insufficiency remains a common Hollywood condition.

Although it tends to flatten out and oversimplify the situation, the plot, and the people, the current version captures at least some of the tone and texture of a novel by perhaps the most cinematic writer of the 20th century. Michael Caine plays Thomas Fowler, a melancholy, cynical journalist based in Saigon, where he reports on the progress of the French war against the Communist insurgents. Believing few of the stories he acquires at the official press conferences and submits through the official censors, Fowler refuses to take sides in the struggle between East and West, choosing instead a disillusioned neutrality. He finds in Saigon a refuge from the dreariness of home, the English climate, and a failed marriage, conducting himself in the manner of the traditional colonial expatriate --- drinking with his fellow journalists at the local bars, sleeping with his lovely Vietnamese mistress, Phuong (Hai Yen Do), and smoking opium to provide, perhaps, the necessary release of dreams.

When a newly arrived American intrudes into Fowler's placid, comfortable existence, his world changes and he finds he must indeed take a major step toward involvement and commitment. Alden Pyle (Brendan Fraser), the quiet American of the title --- the name must ironically refer to both a previous American naif, John Alden, and a legendary foreign correspondent, Ernie Pyle --- initially behaves like an idealist, working for a medical team out of the American mission that is apparently dedicated to helping the Vietnamese people and saving at least a portion of the world. As everyone but the experienced Fowler must realize, however, Pyle is actually an officer of the CIA, who believes he can truly help the Vietnamese by aiding the installation of a puppet leader, a freelance mercenary named General Thé.

Despite the complicated background of several opposing sides --- Pyle envisions a "Third Force," distinct from the French and the Communists, for example --- and a confusion of enemies, the movie pretty much concentrates on the personal conflict between Fowler and Pyle. The innocent American falls in love with the exquisite Phuong; her domineering older sister, Miss Hei (Pham Thi Mai Hoa), sees in Pyle a more suitable mate for Phuong: a young, single, wealthy American who will marry her sister and take her to a new life in America. The conflict between the two men for the love of Phuong rather too obviously underlines the political situation, in which the two cultures struggle for possession of the beautiful, vulnerable country, a notion that Pyle rather unsubtly articulates in a confrontation with Fowler.

The picture and the conflict reach their climax when a terrorist bomb disrupts the sunny calm of a Saigon morning, and Fowler realizes, amid the maimed bodies, the bleeding children, the dead and dying, the true nature of Pyle's idealism and the real meaning of his dedication. He resolves, with some reluctance, to take some drastic action, a transformation which leads him finally to his own choice of a side and his own most ambiguous commitment. The resolution, like everything else in the movie, hardly approaches anything like heroism or triumph, but hints at some of Greene's persistent themes --- the choices that lead to betrayal (of both the self and others), and the dismal failures of love.

Caine has been nominated for a Best Actor Oscar for his work in The Quiet American, an honor he richly deserves. Here he turns his cheeky Cockney cynicism into something older, wiser, sadder, acting and reacting with a sort of restrained melancholy suited to the dark, tropical languor of the film's interiors and the decayed imperial dream he represents. His bulky body and gee-whiz manner allow Fraser to create a stark contrast to Caine's underplayed coolness, but he overplays the eagerness and seldom achieves much in the way of credibility. If it cannot match the richness and relevance of Greene's novel, the movie manages to reflect something of the author's sensitivity to emotional and political nuances in faraway places, and his amazingly prophetic vision of the tragic outcome of an impossible war.