These aren't the cats you're looking for

With Sony and Microsoft both unveiling shiny new consoles this month, and their accompanying media blitzes, Nintendo’s struggling Wii U needs a hit this holiday season in the worst way. It needs a console seller, and given that the new editions of Mario Kart and Smash Bros. are still months away (at least), Nintendo has once again turned to its favorite plumber: it’s Mario to the rescue in “Super Mario 3D World.” Mario’s previous forays have had the power to sell systems. The “Galaxy” games helped boost the Wii, “Mario 64” launched the N64, and even “Sunshine” moved some GameCube units.

Having played the game for the first seven worlds, I doubt that “Super Mario 3D World” will have the same draw. It’s a pretty game, a fun game, and a very cute game. But it feels awfully slight compared to the rest of the marquee Mario games. That makes sense, given that it is in fact a pseudo-sequel to the 3DS’s “Super Mario 3D Land.” That’s right, it’s a platform sequel to a handheld game, and that is blatantly obvious while playing it on the big screen.

The plot, such as it is, involves Mario, Luigi, Princess Peach, and Toad stumbling across clear piping, from which emerge some wee fairy creatures that are quickly snatched up by Bowser. (I interpreted this as Nintendo taking a firm stance against homophobia.) The gang jumps into action to save the sprites, going through a series of stages that combine enemies and settings both new and familiar in the fairly standard Mario formula.

“Familiar” and “formula” are the key words here. “Super Mario 3D World” is almost exhaustingly referential. It pays homage to virtually every game in the Mario canon, with a particularly heavy tip of the red hat to “Super Mario Bros. 2” and “Super Mario Bros. 3.” If you’re in a nostalgic mood it’s fair to say you’ll dig this game, as it allows you to play the four main characters from “SMB2” – plus an unlockable fifth character from a more recent entry in the franchise – all with their own unique abilities (Luigi jumps higher, Princess floats, etc.).

And that's one of the problems with “3D World” – it is bringing very little new to the table. Nobody would argue that the Mario games have ever been particularly original, but the recent console entries – the two “Galaxy” games and even the divisive “Sunshine” – at least had fresh takes, a unique approach, and some “Oh, cool” moments. “3D World” simply takes the formula that has been successful on the 3DS, merges it with the multiplayer shenanigans found in the recent 2D “New Super Mario Bros.” games, and calls it a day.

It’s also a very thin game, both in terms of its length and its difficulty. I blew through the first seven worlds in under five hours of playtime, and was able to snap up roughly 2/3 of the “hidden” stars and stamps on my first playthrough. I consider myself an average Mario player at best, but if I died more than twice on a level up until the seventh world it was an aberration. Compared to the other Mario console games, “3D World” feels awfully limited in scope. 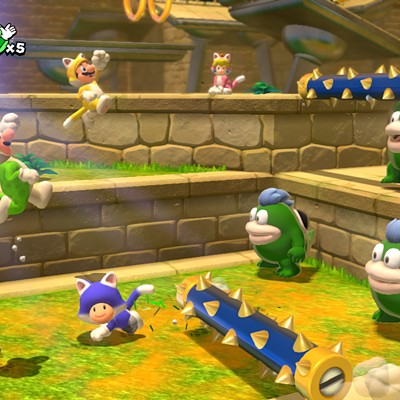 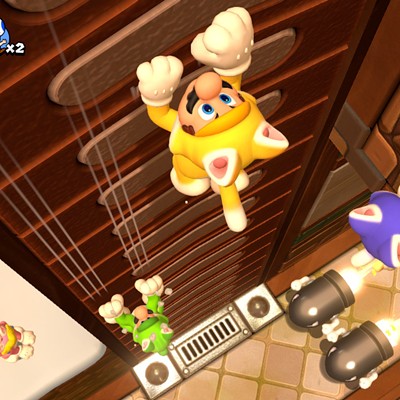 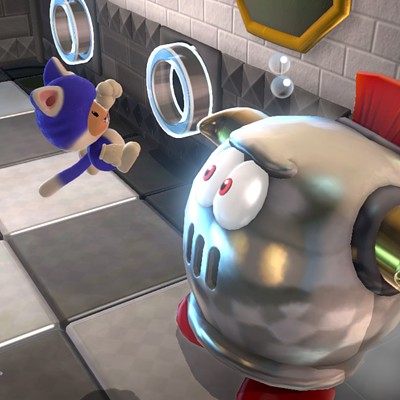 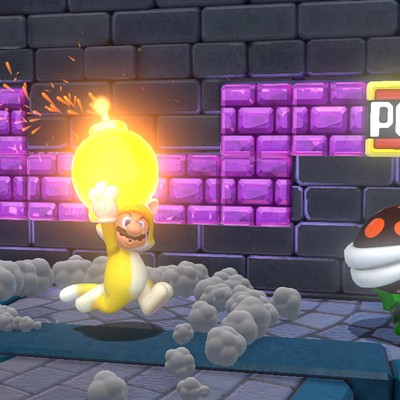 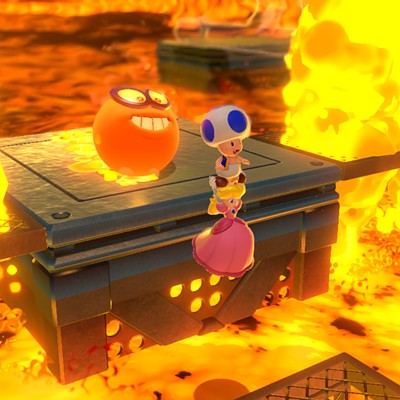 Where the game excels is in its attention to detail. The graphics are lovely (although not significantly more impressive than the lush visuals in “Galaxy”), and there are indeed some charming levels. The Captain Toad puzzle levels are a fun diversion, and the time-based Mystery Houses have a mini-game flavor that called to mind the “Mario Party” series.

The new power-ups are a mixed bag. I love the Cat suit, which gives Mario and Co. the ability to swipe at enemies, pounce in the air, and most importantly, climb walls. The Double Cherry sounds cool in concept – it gives your character a clone that performs the exact same actions simultaneously; you can have at least four on screen at the same time – but in practice proved deadly nearly every time, since it’s impossible to keep track which version is “you” and which is the “copy.” Other power-ups include the Tanooki Suit, Boomerang Suit, and the giant-creating Mega Mushroom.

The Wii U GamePad is still, frustratingly, inconsistently deployed. In a few boards it is essential to use, as you have to activate hidden blocks by touching it, or spin fan carts by blowing into the mic. But for the most part it’s still the exact same visual that’s on my big screen, just shrunk and set into a clunky remote. Nintendo had a lot riding on the GamePad, and you can see the potential in the hardware. But the software engineers still don’t seem to know what the hell to do with it most of the time.

The multiplayer functionality is mostly seamless. In fact, the game is more enjoyable when played with friends as you zip around the various boards – don’t worry if one player gets too far ahead as a bubble will helpfully redeposit stragglers to the current screen. But the boards, whether played on your own or in multiplayer, are awfully short, and by the time you really get into a level it’s basically over. On more than one world I found myself exclaiming, “Wait; is that really it? I’m done?” That’s not great for a game, especially one retailing for $60.

And that’s really the rub. Were this a 3DS game, with a lower price point, I might be more understanding. But it’s not. This is the first 3D Mario installment in more than three years, and it is coming out when Nintendo needs a meaty Mario game in which players can get lost. That happened to me with the “Galaxy” titles, with “Mario 64,” even with “Sunshine” – a game I eventually hated, but still found myself sucked into. “Super Mario 3D World” lacks the substance and scope of its predecessors, playing like a handheld game on a home console. Given the success of the 3DS that may have very well been the point. But with all the looking back and so little to look forward to, I’m more concerned about Nintendo’s prospects in the console market than I have been in years.